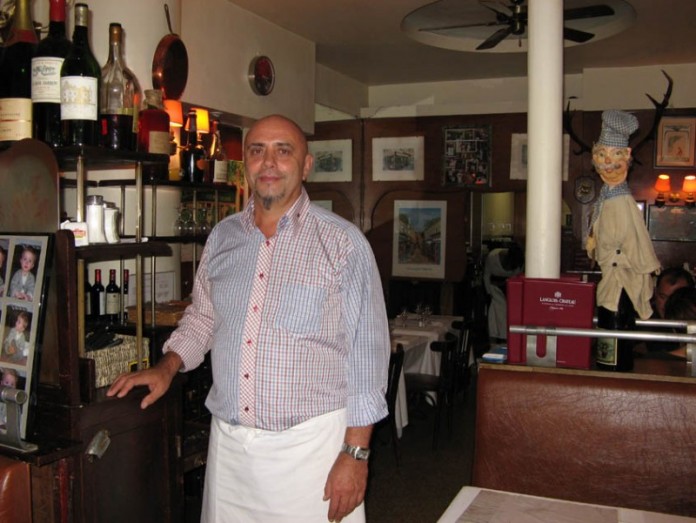 It’s no surprise that many Americans are discovering, or rediscovering, the joys of traditional French bistrot cooking after seeing Julie and Julia, the charming film about the discovery of France that led the late Julia Child to produce her brilliant book Mastering the Art of French Cooking, and a young New Yorker who later cooks her way through it.

Those who are Paris-bound this autumn might enjoy a taste of the real McCoy at one of my favorite old-fashioned Paris bistrots, a jolly, sometimes raucous, no-nonsense place not far from the Gare de Lyon train station. Well-known and loved by Parisians during the game season—the name means the doe in the forest and gibier is a specialty—La Biche also serves a superb anthology of traditional bistrot dishes including the Beaujolais region’s classic coq au vin—rooster stewed in red wine—that’s almost worth the price of an airplane ticket.

Start with a slab of the delicious homemade terrine de chevreuil (venison) or some freshly made céleri rémoulade, and then choose among main courses that might include venison braised with prunes or a perfect roast duck. The regulars favor the homemade chocolate cake, but there is usually also a fruit tart on the menu—aux quetsches (plums) if you’re lucky. Rather than fretting about your cholesterol after a rich feed here, why not take the eminently wiser Gallic approach and conclude your meal with one of the excellent Armagnacs?

Originally published in the October 2009 issue of France Today