There is nothing quite like côtes de porc in thick Roquefort sauce to warm the cockles. Even in the height of summer, nothing beats the French classic.

First, source a great pork chop. I recommend a breed like Gloucestershire Old Spot and a chop of around 12 ounces. Lightly season the pork using extra virgin olive oil, sea salt and ground black pepper. Chargrill the chop until it is golden brown and caramelised on both sides. If you don’t have a chargrill, place in a searing hot pan instead. Ensure maximum colour is obtained on top before turning. Whilst the pork is cooking, whip together equal parts of Roquefort and salted butter (50g of each for four portions) and spoon onto cling film. Roll it to make a sausage shape and chill in the fridge.

Once the pork chop is cooked, take a section of the butter, place it on top of the pork and pop it under the grill until it starts to cascade. To serve, toss together some fresh watercress and a light vinaigrette, and season with some salt and pepper. For the vinaigrette, simply mix together Dijon mustard, white wine vinegar, a squeeze of lemon and extra virgin olive oil. Present on a pre-heated plate with pommes frites. Ready, steady, tuck in. 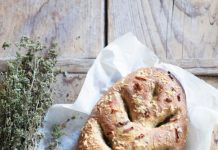 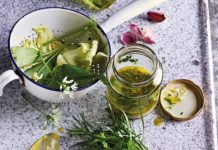