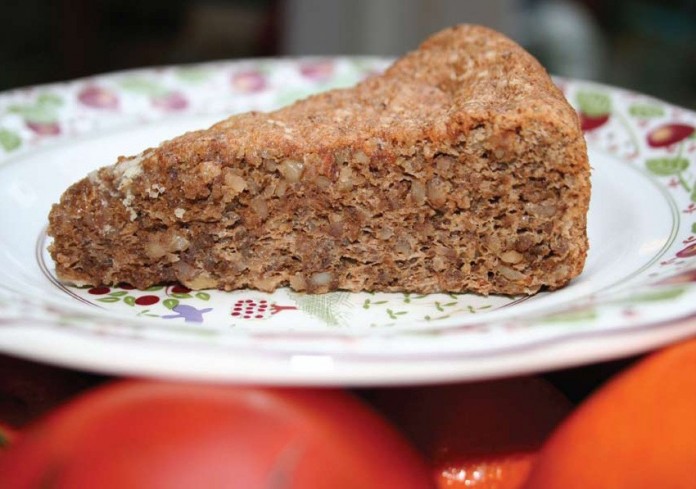 The French aren’t avid bakers because they don’t have to be. There are about 32,000 boulangeries to serve the needs of the French, about one per 1,800 inhabitants. As for pâtisseries, where frothy cakes and pastries line sparkling shelves, there are more than 7,000 to serve the national sweet tooth, and that doesn’t count large enterprises, just neighborhood affairs. With that kind of floury wealth at the doorstep, why bake?

Why bake, indeed, yet most of the French cooks I know have their share of favorite baked desserts at their fingertips. None include the fluffy, multilayered delicacies found in the pâtisseries and boulangeries; they are simpler, but have their own sort of sophistication. High on the list of home-baked goods are those made with nuts that are ground as fine as flour. The most common are based on ground almonds and sometimes ground hazelnuts. Rich with butter, scented with either vanilla or almond flavoring and leavened with beaten egg whites, these cakes are often served just slightly warm. When they are baked in individual rectangular molds they are called financiers, named for the gold bars they are said to resemble; at other times they’re baked as simple, round cakes. Among my very favorites of the nutbased cakes is a moist, dense, richly flavored version made almost entirely of ground walnuts. Extremely simple to make, it requires the freshest possible walnuts that are finely ground with a touch of sugar, a tablespoon of breadcrumbs and no flour at all. The resulting gâteau aux noix is delicate, tender and melts in your mouth.

Another baked treat that I get to sample in many homes is the melting chocolate cake, currently No. 1 on the French dessert Hit Parade, at least according to a recent issue of a popular women’s magazine. It has dozens of variations, but contains little or no flour, relying almost entirely on butter, chocolate and perhaps some ground almonds for its substance. I say it’s simple, and it is. But the chocolate must be excellent, and the baking timed to perfection for it to be a truly wonderful dessert.

Choux pastry is another typical home-baked treasure. This is the egg-andbutter- rich pastry which, when baked at a high temperature, poufs up to make what we call a cream puff. It has an illustrious history: It is said to have come from one of the chefs in the court of Catherine de Medici, though records of it are also found among the peasantry, who baked their choux in the ashes then used them in soup. There are regional variations to choux pastry, too. The most famous among them is from Burgundy, the gougère. Flavored with Gruyère cheese, these crisp little choux are usually served with the traditional Burgundian aperitif, kir (white wine with a splash of crème de cassis). To be truly perfect, a gougère must be crisp on the outside, just slightly custardy on the inside and fully flavored with the cheese. Without cheese, choux are most often used in sweet confections. Topping the list are profiteroles, for which the choux is slit open, then filled with vanilla ice cream (or sometimes pastry cream) and set in a pool of (or doused with) dark chocolate sauce. Antonin Carème, the 19th-century “chef of kings” made his name with creations using pâte à choux, most notably profiteroles. Of all the glorious, festive home desserts, it is perhaps the one that no one can ever resist.

Madeleines are another legendary homebaked sweet, neither a cake nor a cookie but both. Most know the madeleine because of its veneration by author Marcel Proust, but it had a life well before he ever tasted one. The origin of the madeleine is steeped in a sweet legend. In 1755, Stanislas, the king of Lorraine, suddenly found himself with a table full of guests, and an angry pastry chef who took his leave without preparing dessert. One of the king’s servant girls, who was from the town of Commercy, stepped up to produce golden cakes in the shape of a sea shell, saving face for the king and delighting all diners. The king, an appreciative man, called the girl to him and asked her name. “Madeleine,” she replied. The king christened the cakes “Madeleines de Commercy”. Since 1882, madeleines have been produced in Commercy and sold throughout the world. Legends aside, those who truly love madeleines prefer to make them at home— they are exquisite still warm from the oven, and absolutely best eaten the day they are baked.

Macarons, the small, round almondbased pastries that took France by storm several years ago, are now creeping into the home kitchen, although they are notoriously tricky to make. (When I asked a pastry-chef friend if he had any tips to successfully making them his response was “Don’t”.) Home cooks can now buy molds that hold the batter in a round shape as it bakes, just in case the egg whites weren’t beaten quite enough, or the amount of sugar quite right. As for flavors and fillings, anything goes, so you can make inky-black ones and flavor them with licorice, or vivid purple ones and flavor them with violets, or color them caramel and flavor them with foie gras.

Finally, there is that most ubiquitous of baked French desserts, the fruit tart. Apple is the favored fruit, and any home cook worth her salt (remember, French home cooks are overwhelmingly female) can produce an apple tart made with her own pastry at the drop of a hat. Depending on the season, the tart might be flavored with red currant jelly, or a layer of chestnut cream. It might be a mix of pears and apples, with a slice or two of quince added. Open faced, glazed with sugar, a tarte is always a delight.

Baking à la française of this sort, done in the home kitchen, is a perfect antidote for the winter blues, should they come knocking at your door. While you will want to experiment with many different homebaked sweet treats, I highly recommend the following walnut cake. The recipe is from a friend who swears by its restorative, full-flavored substance. I couldn’t agree with her more.

1. Line a 9-1/2 inch (24 cm) springform
pan with parchment paper, butter
the parchment paper and the sides
of the pan. Preheat oven to 350° F
(180° C).
2. Process the walnuts and 2 tbsp sugar
in a food processor until they are very
finely ground. Be careful not to overprocess
as the nuts can become oily.
3. Reserve 2 tbsp of the remaining
sugar for the egg whites.
4. In a large bowl or the bowl of an
electric mixer, whisk together the egg
yolks and remaining sugar (except the
2 tbsp reserved for the egg whites) until
they are thick and pale yellow. Fold
ground walnuts and breadcrumbs into
egg yolk mixture.
5. In a large bowl or the bowl of an
electric mixer, whisk egg whites with
salt until they are very foamy and just
beginning to create soft peaks. Whisk
in the reserved 2 tbsp sugar and continue
whisking until the mixture is
glossy and forms soft peaks.
6. Fold egg whites into walnut and egg
yolk mixture until thoroughly combined.
Turn mixture into the prepared
pan and bake until the cake is golden
and puffed, and your finger leaves a
slight indentation when you press the
top gently, about 35 min.
7. Remove cake from oven and let cool
30 minutes on a wire rack. Remove
cake from pan and let cool completely.
Transfer to a platter and serve. 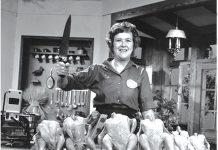 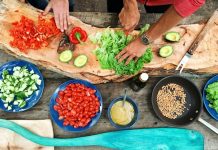