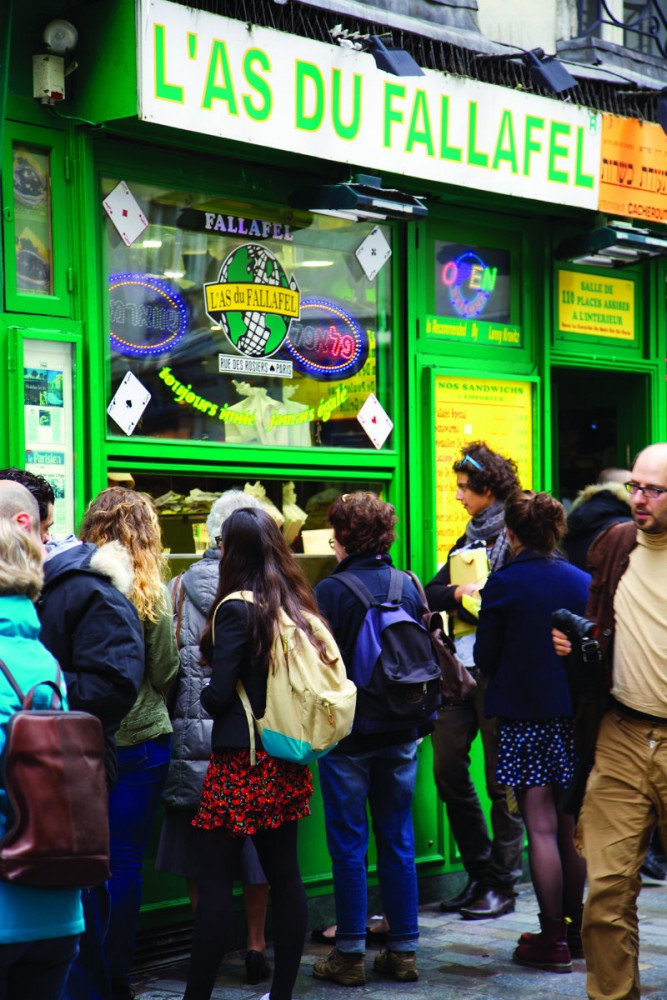 There’s a place in Paris where, surprisingly, the croissant doesn’t reign supreme – nor do its usurpers, the crêpe and macaron. Those who wander down the street in question often carry the same accessory, but it’s not the latest Louis Vuitton or Hermès bag, although it’s certainly worth lining up to purchase. This particular street is Rue des Rosiers and the accessory is a pitta bread stuffed to the brim with falafel. This cobblestoned stretch in the heart of the Marais area is, above all, a place where people come to eat.

Aside from nibbling on the top of their baguette, en route from the boulangerie to home, it’s rare to see Parisians eating while walking along the street. However, on Rue des Rosiers, it’s virtually a prerequisite. And this 300-metre stroll will not only satisfy your stomach, but also your penchant for people-watching. The entrance to Rue des Rosiers, off rue Vieille du Temple, announces itself without much fanfare. In fact, it would be easy to walk straight past it without realising the gustatory treasures that lie on either side of the narrow thoroughfare. There’s a tangible buzz the moment you begin to wander its length, and the cacophony is of a street that is alive  with activity – the rhythm of heels striking cobblestones, and the din of food vendors’ chatter and yells bringing a certain excitement.

Although its length can be walked in a matter of minutes, the street is best traversed at a leisurely pace. Take a deep breath and you’ll be overwhelmed by the irresistible smell of Jewish baked delights wafting from petite shop fronts, seasoned by spicy top notes of freshly-made falafel. A lone musician sits perched on a stool at the corner of Rue des Rosiers and Rue des Hospitalières Saint-Gervais, his eyes closed as he lovingly manipulates his accordion. The occasional clink of change landing in his doffed cap does nothing to stir him from his reverie. A woman, seemingly bewitched by the gentle melody emanating from the instrument, stops to revel in the music. Her feet begin to move smoothly, in waltz time, and she too closes her eyes and then turns in elegant circles, as if led by an imaginary partner.

Nearby, sharply-dressed men atop scooters navigate the gauntlet of pedestrians, beeping their horns good-naturedly as they wind in and out. While there are plenty of tourists huddled along the street – doubtless  drawn in by tales of the glorious falafel which are on offer – it’s clear that it’s also a favourite of locals. People greet each other when passing, doling out the occasional hug or kisses as they say hello. Outside a crowded boulangerie, a cluster of Jewish men clad in their traditional black garb and Borsalino hats stand chatting animatedly – this is a scene that has been repeated countless times during the street’s history.

Quaintly framed by a cascade of ivy tumbling down the side of an old building, the Rue des Rosiers street sign overlooks the bustling scene. Below, an elderly woman, surrounded  by artistic implements, carefully sketches the streetscape, intently examining the intricate architecture of the building across from her. She smiles, as if caught up in her own world, revelling in the beauty she’s recreating on the page.

Every second person who wanders by is armed either with a tiny fork in one hand and an overflowing falafel in the other, or a Jewish bakery treat of some manner. Those who aren’t strolling, lean against a handy surface, quietly tucking into their flavoursome lunch while surveying passers-by.

Contrary to Paris’s other famed epicurean streets, Rue des Rosiers isn’t lined with the usual rattan café chairs – its atmosphere is a casual one.

Outside a particular establishment halfway down Rue des Rosiers, you’ll find a queue snaking along the street. L’As du Fallafel, which is hailed by many as the best purveyor of falafel in Paris (some say the world), dominates the street. Other falafel sellers nearby try in vain to entice revellers to sample their fare, some made almost hoarse by their constant verbal promotion.

Another noteworthy epicurean jewel is Korcarz, a boulangerie and pâtisserie with baked goods so golden that the shop interior seems to glow. Its eponymous owner, Joseph Korcarz, arrived in Paris following World War II, and was one of the first to bake kosher bread along Rue des Rosiers – nowadays, his son and grandson have joined the family firm. Nearby lies Micky’s Deli, serving American-style kosher deli food, including pastrami and lox sandwiches. And if your discerning palate leans towards Sephardic rather than Ashkenazic cuisine, the ivy-draped Chez Marianne, which was once a Sephardic grocery store, features the added appeal of being able to sit down to enjoy your meal.

Midway along the rue, there’s a surprisingly fresh aroma of privet hedge, which acts like a palate cleanser after the sensorial inundation of numerous delis and falafel dens. Although there are no longer many of the street’s namesake rose bushes (rosiers) along the stretch, plenty of ornamental greenery exists in overhead planter boxes, which are blooming with elegantly manicured geraniums gazing through the curls of wrought-iron window sills.

Though it sits within strolling distance of several of Paris’s cultural icons, Rue des Rosiers paints a different picture to other renowned streets of the city. Nestled in the 4th arrondissement, this pedestrian thoroughfare is in the heart of the Marais, which translates as ‘swamp’, in reference to the marsh-like terrain it was built upon. Initially located outside Paris’s city walls, under the 13th Century reign of King Philip II Augustus, the quartier still features some of the city’s best examples of medieval architecture.

In the late 19th and early 20th centuries, the area earned the unofficial moniker of ‘the Pletzl’ (Yiddish for ‘the little place’), when it became a refuge for Jewish immigrants. As a result, Rue des Rosiers evolved into a mecca for Jewish culture and the street was soon lined with delis, bakeries and bookstores. This was a time when shrewd customers would pinch the bread to see if it was fresh, and while there’s no need for that these days, a sense of tradition and nostalgia still imbues the locale. Jewish symbols are also subtly built into the architecture – you’ll spy the menorah on many of the facades, along with Hebrew inscriptions. Just off Rue des Rosiers, on Rue Pavée, the imposing Agoudas Hakehilos Synagogue looms over the narrow streetscape. Built in 1913 by architect Hector Guimard, who’s renowned for his Art Nouveau creations, the Pavée Synagogue, as it’s also known, was Guimard’s only religious building and is worth a peek for its lavish chandeliers and other furnishings.

One of the most notable facades along Rue des Rosiers is the Hamman Saint-Paul, constructed in 1863, when many apartments were lacking bathrooms. The building is now home to clothing boutiques, though its ornate exterior – complete with the words sauna and piscine etched in stone – still remain.

These days, Rue des Rosiers is a mix of old and new Paris, with the neighbouring streets home to some of the city’s most cutting-edge fashion boutiques, hippest bars and chic design ateliers. The locals, a mix of creative types and intelligentsia, sport a distinctly individual sense of style, using fashion as their method of expression. But what’s perhaps most impressive about these residents is that they manage to make the often messy act of eating falafel somewhat glamorous. Although the rest of us may not be able to manage such elegance, a visit to Rue des Rosiers parisian walkways is worth the messy fingers.

This rustic joint is lauded by some as the purveyor of the world’s best falafel, so no wonder that it boasts something of a cult following. Although you’ll have to line up to nab your soft warm pitta stuffed with eggplant, cabbage, hummus and, of course, boules of falafel, it will certainly be well worth the wait.

Among myriad soothing herbal fusions, this petite outpost of Parisian maison de thé Kusmi specialises in Russian blends – including the Detox, which is a favourite of the city’s fashion set. Kusmi’s vibrantly-hued tins and menagerie of tea accessories also make impressive gifts for friends and family back home.

You’ll likely be drawn in by the sweet smell of soap and other beauty elixirs which emanate from the doorway of Sabon. The shelves of this boutique are lined with luscious creams, body scrubs – made using salt from the Dead Sea – and bath oils, all of which are perfect for pampering.

Tropézienne sandals are a requisite summer accessory for les femmes Françaises and two brands are widely considered to be the best. Although you’ll have to travel to St Tropez to purchase one of the top brands, Rondini, the other boasts a Parisian pied-à-terre just off rue des Rosiers.

If your attention isn’t seized by the bright yellow shopfront of Sacha Finkelsztajn’s den of Yiddish treats, it soon will be by the voluptuous baked goods which can be spied through its windows. The gourmet delights therein are in abundance, but you can’t go wrong with the Yiddish Sandwich followed by the famous cheesecake.

Founded by Dimitri Panzer in 1979, due to his nostalgia for his grandparents’ traditional Ashkenazic deli and charcuterie items, this remains a family affair. Dimitri’s son Nicolas now helms this enclave of mouth-watering provisions, which include latkes, kneidels, harissa and an impressive selection of meats. 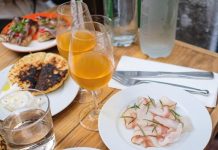 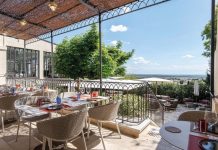