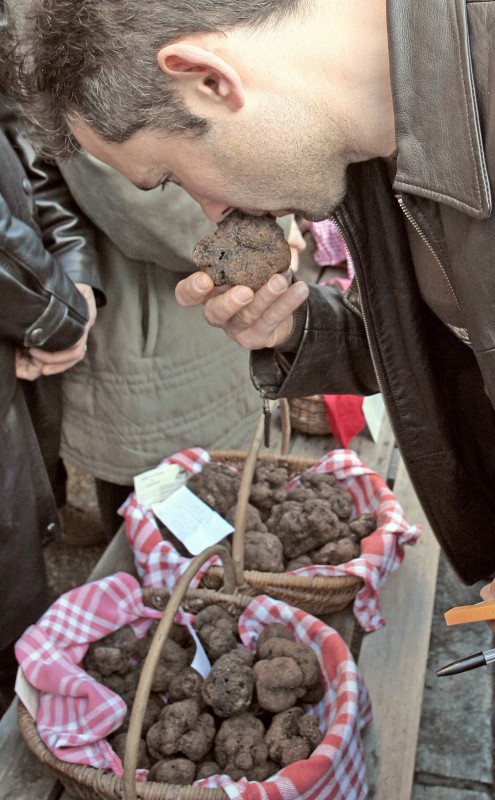 Dick Pyle has the sort of name you might expect to find in a Graham Greene novel about skullduggery in the darker corners of the globe. When you learn that he deals in black diamonds you begin to wonder. What exactly is the raffish-looking Mr. Pyle up to in his remote corner of France?

Turns out that Mr. Pyle, an amiable man—though he once hurled javelins for the Oxford University athletic team—is in the business of growing truffles: those black, mushroom-like nuggets so rare and costly they are practically worth their carat weight in diamonds. And if you are prepared to fork over €199, Dick Pyle will grow some black diamonds for you too.

Pyle is the enterprising founder of a truffière, a truffle plantation, in Gascony, that part of rural southwest France that has also generously given us Armagnac, foie gras and up-and-coming Madiran wine. Truffières are certainly not new to France, but Pyle’s comes with a pleasing twist: for the past six years he has been inviting people to buy truffle trees, either for themselves or as gifts, the idea being that they will receive their own personal supply of Tuber melanosporum—the black Périgord truffle—once their adopted tree starts doing its thing.

These are not any old trees. Truffles, our man explains, are exotic fungi of the mushroom family that have a particular affection for the root systems of certain oak trees, notably the evergreen holm oak, Quercus ilex, and the white, deciduous downy oak, Quercus pubescens. Indeed, for reasons best known to itself and largely unexplained by science, the truffle has developed a symbiotic relationship with the oak: growing on the oak’s roots, the truffle enables the tree to take up important trace elements like phosphorus from the ground, while it enjoys growth-promoting sugars via the oak’s root system in return.

Truffles are not easy to find, tucked in among those tangled tree roots. It usually requires the services of a specially trained truffle hound to locate and unearth them, and they are made rarer still by the encroachment of farmland on the forests and woods that are the black diamond’s natural habitat. The sad result is that France’s wild truffle harvest has declined tenfold in the past century. Happily, the French, who have a reverence for most things culinary and a special affection for truffles, have been in the vanguard of those seeking ways to propagate them commercially in plantations by seeding the roots of young oak trees with truffle spores rather than allowing mother nature—a slow moving dame at the best of times—to do the work herself. As Pyle explains: “In the wild, truffle production is a matter of chance. But here in the truffière we expect to be able to improve the odds significantly.”

The idea of a truffière came to Pyle back in 2002 shortly after he had sold his majority share in Hilaire, a highly successful estaminet in London’s South Kensington district. Armed with the loot from this transaction he took himself off to pursue his dream of owning a house in France. The house hunt didn’t go too well at first, but then our would-be émigré discovered the Gers, Gascony’s sleepiest and possibly loveliest département, whose bosky hills and sheltered valleys have a good covering of the sort of soil that lends itself to oak trees and their tasty little friends. And there, in the Gers, Pyle also discovered the ideal house. This was doubly serendipitous because at about the same time he experienced his truffle-growing epiphany. The previous year his daughter Hannah had given him a vine in a Sussex vineyard as a Father’s Day present. “I had this sudden realization,” he recalls. “If people were prepared to adopt vines, why not truffle trees?” A chance encounter with the owner of a neighboring field led to the purchase of just over two acres of land on which to plant his first trees and soon the truffière was born.

Today the Pyle truffle plantation has expanded to accommodate 1,200 trees, more than 700 of which have been adopted by people from 37 countries including faraway Australia. Tree owners range in age from Pyle’s newest grandchildren, the twins Sasha and Preston, now almost a year old, to an English gentleman who recently received a tree for his 90th birthday. They also include a number of celebrities including two double Oscar-winners—screenwriter William Goldman of Butch Cassidy fame and Crash writer-director Paul Haggis. Owners pay an annual maintenance fee of €49 which covers TLC for the tree and a yearly snapshot to monitor its progress. Owners are also encouraged to visit the truffière where Dick introduces them to their tree and pours good Gascon wine to toast its truffle-producing prospects. He can even provide accommodation, in the form of a gîte or bed and breakfast. When the truffles are harvested, owners may opt to have them sold in one of the local truffle markets (see below) and receive a check for the proceeds, or they can take delivery of them, using a courier service to make sure they arrive in an edible state even to owners who live on the far side of the world.

For the moment, however, it’s still a waiting game at the truffière. In theory, seeded truffle trees can begin producing after three years, so a first harvest this winter is a possibility. But Pyle prefers to go with the local wisdom, which suggests that it usually takes between five and nine years after planting before the black diamonds start to appear. Truffles, he warns, are unpredictable: “One tree may produce a bumper crop, while its neighbor does little or nothing. It’s the uncertainty that makes the whole concept intriguing.” Pending the first harvest, the tasks in the truffière are to water the trees (a drought in the first year almost killed them all), weed the land in between and make sure that deer and marauding wild boar from the nearby forests do not attack the saplings and young trees. Wild boar, or sangliers, can sniff out a truffle faster than you can say bon appétit and will uproot an entire truffière overnight in their greedy search for the black gems, so a sturdy fence and much vigilance is required.

Gazing over his truffle venture, Dick marvels at the chain of events that led to his involvement in this far-flung enterprise. Just as it is hard to believe that someone was tempted to eat the first oyster, so is it difficult to imagine when and why humans decided that truffles might make a good addition to the larder. For the most part they don’t look very appetizing, and at first sniff they can exude a musty aroma more reminiscent of the cowshed than the cuisine. But lurking behind that ugly exterior is a fungus whose ability to infuse a dish with exquisite flavor is uncontested. And it’s not just flavor that truffles can provide. Pyle points out that George Sand, the famous 19th-century French novelist, described the Périgord truffle as the “black magic apple of love”, while that great gastronomic authority Jean Anthelme Brillat-Savarin also ascribed aphrodisiac properties to the tasty Tuber melanosporum, noting in his classic gastronomic treatise The Physiology of Taste that “it makes women more affectionate and men more attentive.” website

Of all France’s many rural pursuits—which include combine harvester racing and ugly face competitions—truffle hunting is the most rewarding and the most secretive. A country dweller who has learned the location of the best truffle trees from his peasant forebears does not call up his buddies for a weekend of truffle picking as he might if he were gathering wild mushrooms or shooting hare. No, he sneaks out alone when—he hopes—no one is looking to seek furtively for those black diamonds. And then he lies outrageously about where he found them. Never ask a truffle vendor for the provenance of his truffles. Appellation d’Origine Contrôlée does not apply.

In the past peasants used to hunt with pigs, which are singularly adept at sniffing out truffles. Trouble is, it’s very difficult to stop a large, hungry porker from snarfing up the truffles it finds. So today specially trained truffle hounds are used, and a good one is a prized possession. In the old days of modest farms and more abundant woodland, the French countryside yielded a sizeable crop of truffles each year—some 2,000 tons a century ago compared to a mere 20 tons in recent years—and there were usually enough for even the simplest farm family to enjoy truffles at home. But now, with demand up and supply down—even with the advent of commercial truffle farms—truffles fetch eye-popping prices.

From early December to mid-March, probably the largest truffle market in southwest France is held on Tuesday afternoons in the little town of Lalbenque (pop. 1,363) just south of Cahors. The Lalbenque market attracts chefs and agents for some of the world’s most famous restaurants, and truffle lovers seduced by the unmistakable aroma of black truffles that suffuses the air of the rue du Marché-aux-Truffes. The retail market kicks off at precisely 2 pm, when a rope separating sellers and buyers is lowered and the haggling begins. At 2:30 pm the wholesalers move in and it’s all over in a feeding frenzy as the black diamonds are snapped up for shipment around the world. Those who aren’t in a position to invest in black diamonds can console themselves with a little lavishly truffle-laced local food. The Café du Monde, in Lalbenque’s old train station, lays on a special market-day truffle menu (€60), and the truffle omelettes at the Hôtel du Lion d’Or can be happily washed down with strong red Cahors wine. Both provide a nostalgic glimpse of the truffle-rich days of yore. website

(From late November to mid-March other truffle markets are found across southern France, notably in Apt, Aups, Carpentras, Saint-Paul-Trois-Châteaux, Richerenches and Valréas.)

Originally published in the January 2010 issue of France Today.