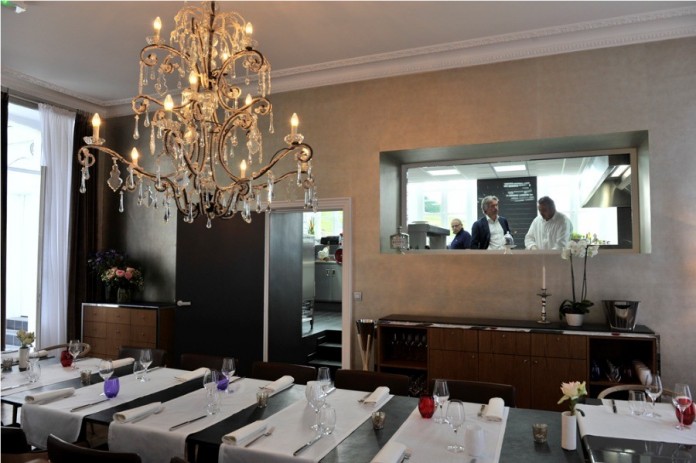 Ever since Anselme and Corinne Selosse, makers of Champagne Jacques Selosse, opened their auberge Les Avisés this summer, it’s not only been the talk of the local wine crowd, who love it, but it’s also become a popular weekend destination for Parisians—along with gourmet Belgians, Luxembourgers and Germans. The handsome Directoire manor house in the village of Avize, just outside of Epernay, was redecorated by Belgian interior designer Bruno Borrione, and chef Stéphane Rossillon, former second to three-star Anne-Sophie Pic in Valence, has done a terrific job in creating the restaurant. It’s a great-looking space, with a large table d’hôtes and several smaller tables, that adjoins his state-of-the-art open kitchen. The regularly changing blackboard menu offers only a single starter, main course and dessert (cheese from Jean-Yves Bordier in Saint-Malo is an extra-cost option), but if one of the dishes doesn’t suit, he’s happy to propose other options. His delightful wife Nathalie runs the dining room and Rossillon himself often arrives to serve you directly from his kitchen. On a recent chilly autumn night, I started with a delicious composition—a coddled egg on a bed of quinoa with creamed baby leeks, tiny cubes of smoked mackerel and tomato chutney—while my dinner cohort delighted in a beautifully made game terrine. Next, turbot meunière, and roasted veal with carrots and beets. The cheese course was an excellent way of finishing up our bottle of fairly priced red Arbois from the Jura, and rice pudding was a gentle finish to a very pleasant meal, and the harbinger of a good night’s sleep in the cozy hotel. (For more on Champagne Jacques Selosse, see France Today, A Taste of Champagne, Dec 2008 and Rare Fizz, Dec 2009.)

Prices are per person without wine.

Originally published in the December 2011 issue of France Today