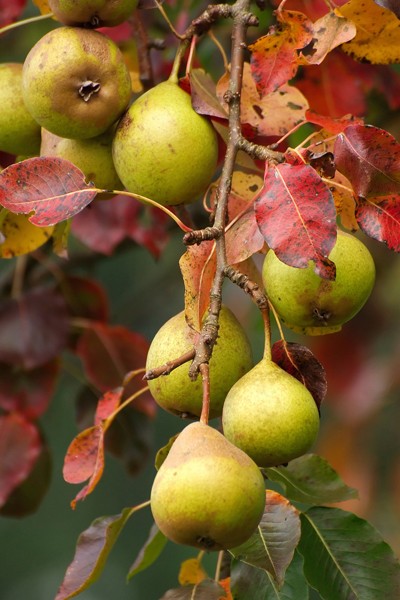 I’m looking out my office window, beyond the rambunctious fig tree and into the tips of the branches of my graceful old pear tree. Only the church knows how long this tree has stood here, for there are no records of its planting, and pear trees live for centuries. This one, I think, is into its second. I believe it has seen Louviers at its peak, when money flowed easily from the textile industry here. It has heard the crack of gunshot and seen the far off plumes of smoke from bombs dropped during World War II, and it has survived two citywide fires. It surely knew the nuns who once lived in my home, and no doubt provided them with fruit for compotes and tarts.

Pear tree have an odd reputation in Normandy, overshadowed by the region’s more delicately beautiful apple trees. As everyone knows, apples are the queens of Normandy, cooked with everything, fermented into hard cider, distilled into Calvados. No one thinks of pears when either Normandy or Calvados come to mind, yet most Calvados contains a percentage of pear juice. In the Domfrontais, an area in the center of Normandy noted for its pears and for its quality Calvados, more than 70 percent of the juice that goes into it comes from pears.

Why does no one ever talk about the pears of Normandy? “The pear isn’t considered a noble fruit,” said Hervé Lestage, oenologist and Calvados expert. “You plant a pear tree for your children; they’re slow to grow and produce. They are mostly ignored.”

When I first moved here more than 15 years ago, my pear tree produced an abundance of miserly, rock-hard little fruits. I tried hard to make them edible, peeling and chopping them with great effort, then cooking them—with questionable results. It took just one season of that before I said to myself that the tree was there to climb, to provide shade, to create a bower for the strawberries planted at its foot, but not for sustenance. Without realizing it, I’d joined the group of those who don’t consider the pear a “noble” fruit. It became, for me, a nuisance, littering the ground with fruit that fermented if not collected instantly, and harbored fruit flies and other unwelcome visitors.

The tree itself is a beauty, gracefully reigning over its corner of the garden. It continued to produce an unbelievable quantity of its rock-hard fruits, which were diligently collected and relegated to the compost heap. I adore pears and occasionally I’d send a wish its way, but each year it did the very same thing.

Then came the summer of 2010. It started hot and heavy, the sun burning the grass to golden and parching the earth. Then it turned wet. Floods of water fell from the sky in August, and gray was the color of the world. Just when it seemed that all would float away, the sun would come out for a few parsimonious days, not quite long enough to dry everything.

September was lovely, and I was often in the garden, trying to control the avid growth of everything from weeds to flowers. The pear tree is always in my peripheral vision but because its fruit isn’t of interest, I don’t pay it a lot of mind. Its leaves are so thick they hide the fruit and it wasn’t until I bent to harvest some arugula that grows under it that I saw a big, yellow, speckled pear lying on its side on the ground. This was unlike any pear I’d ever seen under this tree, and I looked at it with astonishment. It resembled a real pear. I looked up and the tree was filled with huge pears, hanging there like grapes on a vine. The pear in my hand felt ripe and I bit into it. It was cottony and unpleasant in texture, but its flavor was concentrated perfume.

Several days later the ground was covered with more large pears and I collected them, brought them in and peeled and cored them. In the pot they went with a dash of brown sugar. Within thirty minutes they’d melted and turned almost translucent. I tasted. Ambrosia.

I don’t know the technical chemistry of food, but some marvelous alchemy had occurred in that pan. Suddenly, the pears on my tree were of more interest. I have diligently harvested them this fall as they’ve fallen, before the creatures on the ground can get at them. I’ve turned them into clafoutis, tarts and compotes. I recently served them as a “vegetable” with duck, and they were a revelation.

More than a month after that first fruit fell to the ground, the pear tree is still producing, at the rate of five or six pears per day. It’s a good, manageable rhythm.

My lone pear tree, and the fruit it has produced this year, have given me pause for thought. I’ve never agreed with the idea that the pear isn’t a noble fruit—one bite of a truly ripe, local Comice pear and the question of nobility flies out the window. There is no better, more seductively regal fruit. A pear tree lives its hundreds of years with a grace unequaled by any other fruit tree I’ve seen. They are generous, producing many times more fruit than most apple trees, and the symmetry of their branches provides hours of pleasure to children who think, like my daughter, that resting on the branch of a tree high above the ground is better than riding a horse or swimming in the ocean.

I have wondered what suddenly caused this very old tree to produce fruit that is so special. The pear tree is slow to do everything; has it suddenly settled into our presence here after 17 years? Has all that tilling at its foot suddenly made it grateful? Does its new neighbor, my darling little quince tree, make a difference? Or was it just this year’s weather?

I’ll never know, and I don’t really need to. The pear tree’s sudden flare of gorgeous fruit is a gift. I’m already eager to see if there will be a repeat performance next year. Until then, there is more fruit yet to fall, and more delicious flavors yet to enjoy.

Serve this as a “vegetable” alongside poultry, lamb, or beef—it’s delicious. The cooking time will depend on the ripeness and variety of the pear.

1. In a small bowl mix together the spices.

2. Heat butter and oil in a heavy-bottomed skillet over medium heat until hot but not smoking. Add pears and cook, stirring constantly until they are golden and almost tender, about 6 minutes.

3. Sprinkle the pears with the spice mixture and stir until they are well seasoned. Add fleur de sel, remove from heat and transfer from the skillet to a plate. Reserve.

Serves 4 as a side dish

Susan Herrmann Loomis teaches cooking classes in Normandy and Paris. Visit her website. The latest of her ten books, Nuts in the Kitchen, has recently been published by HarperCollins. Find it in the France Today Bookstore. 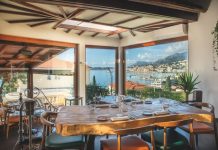