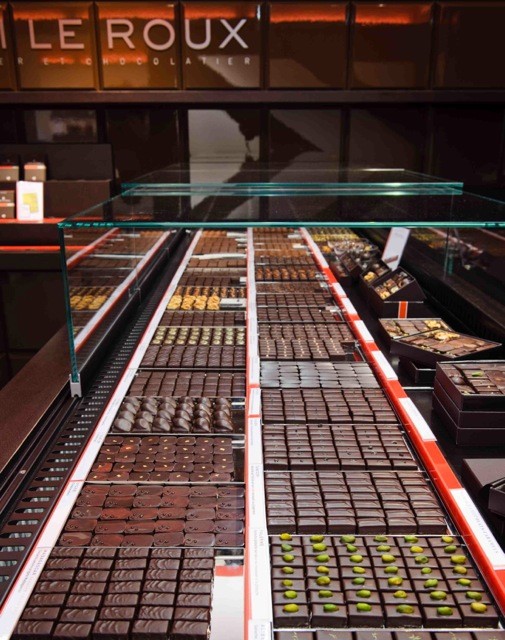 When Henri Le Roux opened his chocolate shop in Saint Germain des Prés last December, he joined more than a dozen world-class chocolatiers in a neighborhood that’s fast becoming France’s chocolate epicenter. Although Le Roux may not yet be a household name, as the originator of the caramel au beurre salé (salted butter caramel), a flavor that has captivated French pâtissiers, chocolatiers and ice cream makers, he has earned serious culinary caché. He also won the lofty title of Best Chocolatier in France in 2003, along with Jean-Paul Hévin and Robert Linxe, the master behind the renowned Maison du Chocolat.

Le Roux opened his original shop in 1977 in Quiberon, a long peninsula jutting from Brittany’s southern shore, famous for its yachts and spas. It was here that he began perfecting his velvety salted caramels, studded with almonds, hazelnuts or walnuts, and his distinctive chocolates, including the Aliberts—dark chocolate filled with thyme-flavored ganache over a lime marzipan base—or the Ch’tou, soft caramel perfumed with lambig, a Breton Calvados, and enrobed in bitter chocolate.

His boutique on the charming rue de Bourbon-le-Château was Le Roux’s first in Paris, with a sleek, darkly paneled room for all things chocolate, and a bright, white-washed room of their own for the caramels and pâtes de fruits—dense squares of concentrated fruit in flavors like fraises des bois, cassis, passion fruit, blackberry and sour cherry. A small window-side tasting bar allows customers to sit down and sample suggested pairings of chocolates, caramels and pâtes de fruits with gourmet coffees from Columbia and Brazil, or three varieties of Japanese green tea.

In December Leroux will be opening a second Paris boutique, this one on the Right Bank on the rue des Martyrs. And both shops will be adding the new Autumn 2012 line of treats to Leroux’s delicious lineup:  two new filled chocolates, the Goma, a praline with sesame and fleur de sel de Guérande, and the Tatin, with a layer of pommeau-infused ganache on Breton apple pâte de fruit; a new intense milk chocolate bar; and two new confitures: Cassis (black currant) and Pomme Tatin: Breton apples cooked in salted butter caramel and transformed into an irresistible-sounding spread.

Originally published in the February 2012 issue of France Today; updated in November 2012