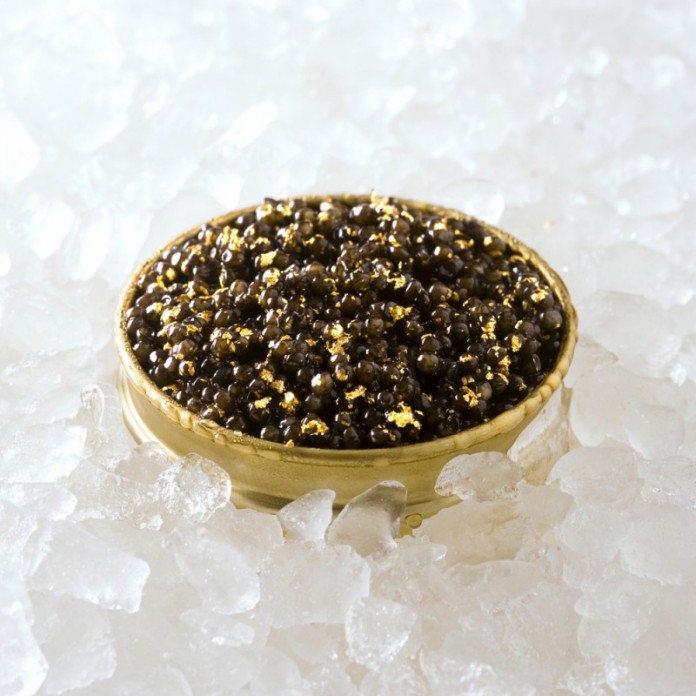 Caviar is a food like no other. Sometimes called gray gold, a symbol of luxury and excess, it’s the stuff of fantasy, and a black marketer’s dream.

Once upon a time sturgeon eggs were consumed mostly in Russia. Then, legend has it, a visiting Russian princess was horrified to see fishermen in France’s Gironde estuary cleaning their sturgeon and discarding the eggs. She explained to the fishermen how to prepare caviar, and when she told them that in her country, fishermen could make a fortune with just a few trips, they were rapidly convinced.

Of course, the tale isn’t really true, but that hardly matters—what’s correct is that French sturgeon, once wild and abundant, were long used only for their firm, flavorful flesh.

Then, during the années folles of the 1920s, caviar became wildly popular in France. Emile Prunier, a visionary who’d taken over his father’s famous Paris restaurant—which already imported caviar from Russia—got the idea to build caviar processing centers in the Gironde and in the Dordogne, where the sturio, a native French sturgeon, was caught. At the same time, the Prunier company also imported the three main varieties of wild sturgeon—sevruga, ossetra and beluga—just to harvest their eggs. Vestiges of prehistoric species, most European sturgeon species came originally from the Caspian Sea, with a few others from the Black Sea and the Danube delta. Today, all are victims of both overfishing and pollution.

In the days of the USSR, sturgeon poaching meant imprisonment in the gulag. Fish farms were maintained and run

by the government, and great care was taken to restock the waters with young fish. Breeding programs raised the fry, or fingerlings, which were then released into their natural environment. But the breakdown of the Soviet system has given rise to a black market and widespread poaching. It is currently illegal to export almost all wild-sturgeon caviar, except for a few tons exported by Iran, and even that supply is dwindling every year to the point of becoming nearly impossible to find or afford. There is also the risk that, if the source is not a reputable vendor, there is no guarantee of the caviar’s provenance, or of its safety, since it very likely may not have been kept at sufficiently low temperatures.

In the mid-1980s, a French government scientific and research organization called CEMAGREF tried unsuccessfully to reintroduce the wild sturio in France. Later, farming was tried by means of an exchange with the USSR: French trout for an adaptable Siberian sturgeon species, the baeri. But at the time few companies were inclined to experiment with farming because imported wild caviar was still abundant and farming was complicated and expensive—it takes about ten years for female sturgeon to mature sufficiently to produce eggs for harvest, but only two years to raise delicious fish for the table. Why raise fish for eggs when the wild variety was abundant and reasonably priced?

At the same time, a Russian immigrant to the US had the same idea, launching a similar farming experiment with another sturgeon species, the transmontanus. Since then, as wild sturgeon have become more scarce, farmed caviar has gradually become really good. It no longer has the somewhat earthy or muddy taste caused by microscopic algae that initially earned it the scorn of connoisseurs. It’s unfortunate that many caviar lovers still retain that first impression because the problem has been solved, thanks to ponds more than 600 feet deep where the water springs up pure and clear and where the female fish are left to rest before the precious eggs are extracted. Contemporary farming operations are carefully sealed off and closely supervised.

While sturgeon was originally native to the French southwest, attempts to farm them have been scattered throughout the country, although full-scale aquaculture businesses are still rare. A Spanish company located near the source of the Garonne River in the Aran Valley, just a few miles on the other side of the French border, produces caviar sold through a French retailer, Caviar des Pyrénées, which sells some 1,000 pounds a year. But that remains hard to find outside of the Toulouse area and Paris.

Vincent Hennequart and his sister Patricia, who specialize in pond fish farming in Sologne, south of the Loire River, have also begun farming sturgeon for caviar, with an initial harvest of half a ton in 2008. By the following year it had more than tripled to 1,700 pounds, sold retail by La Maison Nordique. Theoretically, successful sturgeon-farming ponds require clear water that is at least partly free-flowing. The Hennequart company makes up for a scarcity of flowing water by maintaining low population density—only one fish for each 100 cubic feet of water. With a large number of ponds available, their goal is to increase production without compromising quality.

Four sturgeon-farming companies are located on tributaries of the Gironde estuary and the Dordogne River, and each one claims to be the oldest. France’s largest caviar producer, with some 11 tons a year, is Sturgeon, which sells under the brand Sturia and under other labels including Monoprix Gourmet and Autour du Saumon. The company plans to market another variety, from the ossetra species, which will be a first in France.

Maison Prunier, after struggling with many problems, is now—in partnership with Caviar House—the second largest French caviar producer, with some six tons annually. The force behind that success, and an important promoter of French caviar in general, is Pierre Bergé, former president of the Yves Saint Laurent couture house, who bought the Prunier company and its Paris restaurant in 2000. Thanks to Bergé, Prunier is now rising from its ashes—a second Paris address has been added and Prunier boutiques at Paris airports allow travelers to replenish their stocks on the way in and out.

Chic, and of irreproachable quality, the Prunier brand offers several varieties including Tradition, the jewel in the crown, which accounts for 75% of its production; and Heritage, with larger eggs from more mature fish. The much more expensive Paris selection is garnered from the most recent harvest and available only three months a year—connoisseurs reserve this one in well in advance. There’s also pressed caviar, recently coming back into fashion and mostly used as an ingredient in gourmet recipes.

L’Esturgeonnière produces about five tons a year and furnishes, among others, the renowned Paris restaurant and boutique Petrossian. The Esturgeonnière name is a benchmark for high quality caviar, and its house-label French variety, Perlita, can be found in many shops around the country. L’Esturgeonnière also processes a unique product for a small company called Bellorr: fresh caviar to which crumbly flecks of real gold leaf are added—a fraction of an ounce to the pound.

The young entrepreneur who launched the company, Romain Belloir, explains that, thanks to fish farming, caviar in France is becoming more democratized. Since it’s nearly impossible to buy wild caviar, one way to stand out from other suppliers and to reinforce the idea of luxury is to add gold, which is edible and completely neutral in taste. After canvassing caviar producers, he found Michel Berthommier, head manager of L’Esturgeonnière, who agreed to add the gold flecks at the same time as the salt, so that there was still only a single process—it also ensures that the gold is evenly distributed throughout the caviar. The over-the-top result is magnificent to behold.

Finally, Caviar de Gironde, the historic company that was the first, in 1993, to produce farm-raised caviar, was bought several years ago by two partners, Antony Danno and Jean-Pascal Feray, who refuse to aim for quantity. Now called Caviar de France, it divides its production among three labels: Caviar Ebène, Caviar Diva and Caviar du Bassin.

To process sturgeon eggs into caviar, the gonads—the pouches that contain the eggs—are removed from the female fish. The eggs are weighed, sorted according to size, washed and salted with pure sodium chloride, with borax used as a preservative.

Caviar primeur, sometimes sold without borax, is creamy, with a pronounced flavor of fresh hazelnuts. As the caviar ages, the flavors of salt and iodine become stronger and linger longer on the palate. So caviar lovers choose their product according to both their tastes and their wallets. Prices range from €2,000 to €4,000 for a kilo ($900 to $1,800 a pound) but a mere 30 grams (1 ounce) still constitutes a nice gift to be shared by two.

“We don’t explain the magic, we create it,” says Armen Petrossian, and he’s right. Petrossian is a major figure in the caviar world; he is passionate about his products, and campaigns all over the world both for preservation of the wild species and for farming. He mischievously adds that caviar is never a necessity but a pleasure, and reminds us that we should take advantage of the recent drop in the value added tax imposed on restaurants in France to head for his Paris headquarters and treat ourselves to several grams of his precious gray gold.

Originally published in the December 2009 issue of France Today; updated in December 2011