Home Food & Drink Restaurants Where to Eat on the Champs-Élysées in Paris: Le 68 Guy Martin 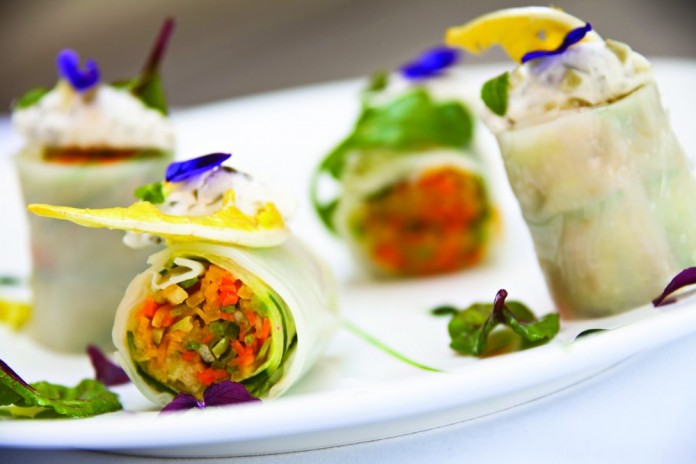 Truth be told, I wasn’t very enthusiastic when a friend visiting from South Africa suggested that we meet for lunch at 68 Guy Martin, the restaurant in the elegant new Guerlain boutique on the Champs-Élysées. Why? Well, I’m just not that much of a ‘food-in-shop’ type of a guy – in myexperience, it’s very rare to find seriously good food in a retail setting, and majestic though it may be, the Champs-Élysées isn’t a place that most Parisians go very often. But since there’s nothing more tiresome than the relentless expert, I went to lunch with some curiosity about what chef Guy Martin, whose main table in Paris is the magnificent Le Grand Vefour in the Palais-Royal, might have gotten up to.

My first impressions were good, since interior designer Peter Marino has succeeded in creating a very beautiful  and understatedly chic restaurant in the basement of the boutique. False windows give the room an airy feel, and the lighting from the Baccarat crystal chandeliers overhead is studiously flattering.

Tables by designer Peter Dayon depict the flowers used in Guerlain’s signature perfume, La Guerlinade – peonies, irises, ylang-ylang and jonquils – and the walls are covered in delicate straw-and-reed marquetry by Lison de Caunes, the grand-daughter of the famous Art Deco designer decorator, André Groult. Overall, the room is such a bastion of serenity that it’s hard to believe you’re just a few steps off of the busy avenue upstairs.

The Guerlain setting is reflected by Martin’s menu, which nods at the fragrant world of the great perfumer by offering sophisticated dishes that delicately emphasise the sensual link between olfactory and gustatory pleasure. This echoes the fascinating collaboration between Martin and head Guerlain perfumer Thierry Vasseur, and it plays out into some very good eating.

Starters of seabass carpaccio with aloe vera flowers and ginger-marinated cucumbers and foie gras seasoned with Madagascar vanilla were intriguing. The main courses were similarly fascinating but very satisfying, and included a honey-roasted duck breast cooked rare with Szechuan pepper, cardamom and orange, and monkfish in a sauce which was inspired by Guerlain’s Habit Rouge perfume – think a medley of Indian spices.

After fearing that it might be too fiddly, I ended up enjoying this restaurant a lot, and since it also serves breakfast and tea with an excellent selection of pastries, it can be considered as a very useful insider’s address in the heart of Paris.

Based in Paris, restaurant columnist Alexander Lobrano has published a new book, Hungry for France, along with a new edition of his popular Hungry for Paris.