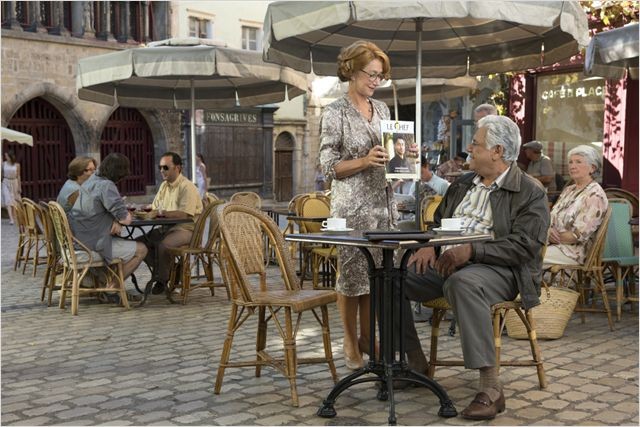 Saint-Antonin-Noble-Val, in the Midi-Pyrénées region, is the picturesque medieval village portrayed in the feel-good film, “The Hundred-Foot Journey” (Les recettes du bonheur), directed by Lasse Hallström. Recently we made a 5000 air mile journey to visit and explore this scenic place.

One can discover the locations where scenes were filmed and re-live the story by taking a stroll down narrow cobblestoned streets. La Halle (the covered marketplace), in the center of the village, dates from 1840 and is the place where vendors displayed their produce in the film and what they continue to do every Sunday morning.

Nearby is Café de la Halle where tables and chairs spill out onto the square and folks gather for beverages and conversation. Facing the café is the oldest civic building in France, the 12th century Maison Romane (town hall), where consuls resided from 1312 to 1791. Now it houses a museum of prehistory. Located off the main street leading into the village is the old garage seen in the film, where the car is towed when it breaks down.

We saw the film for the third time at Le Querlys cinema, housed in an old, ornate, three-story building. Sitting next to me was a local woman, the truffle vendor, who had a brief appearance in the film along with a few hundred other locals.

Also worth seeing up close is the tall-spired neo-gothic church and the arched bridge that crosses the Aveyron River. Another smaller river, the Bonnette, flows around the western edge of the village and feeds into the larger Aveyron, creating an appealing framework to the circular village. Driving on a switchback road out of town, you are treated to stunning views of the village from a distance.

We stayed several nights at the three-sar La Résidence, a charming chambre d’hôtes with five spacious rooms located within the old village and giving access to the entire village by foot. We chose the tulip room with a rooftop terrace facing the Roc d’Anglars and the limestone cliffs that frame the village on the southern edge. The film is loosely based on the well-written book of the same title, written by Richard C. Morais.