Home Culture The Hermione, the Replica of Lafayette’s Frigate, Returns to France 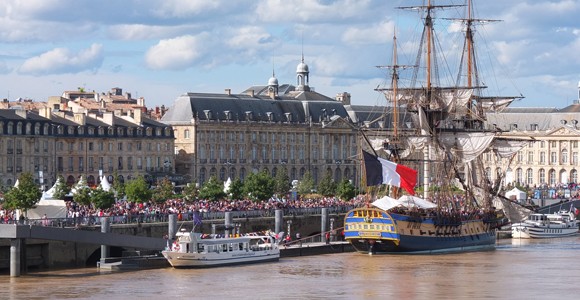 It’s been almost four months since the Hermione first set sail from Rochefort. The beautiful frigate—a replica of the ship that Lafayette sailed to aid the American revolutionaries—had been constructed over a 17-year period by some of the country’s finest craftsmen, using only 18th century building techniques. (For the full details on this extraordinary adventure, see our magazine feature story here.)

On Monday of this week she made a triumphant return to France after a greatly-feted transatlantic voyage which celebrated liberty, Franco-American friendship, and the spirit of “pourquoi pas?”.

The Hermione sailed into the port of Brest, accompanied by a flotilla of tall ships and a modern navy frigate. Gathered on the quays, the crowds erupted in cheers.

The Hermione had first arrived in Yorktown in early June, where Lafayette’s forces had helped General Washington clinch a decisive victory over the British in 1781. The Hermione then continued up the Chesapeake Bay and the Eastern seaboard, for a July 4th celebration in New York city. The ship’s Facebook page chronicled the ship’s adventures—including a tropical storm– while navigating the often turbulent North Atlantic.

After a week of festivities in Brittany, The Hermione will sail the French coast, stopping in Bordeaux before docking at her home in Rochefort. Don’t miss the homecoming party on August 29-30! For more information, visit www.hermione.com