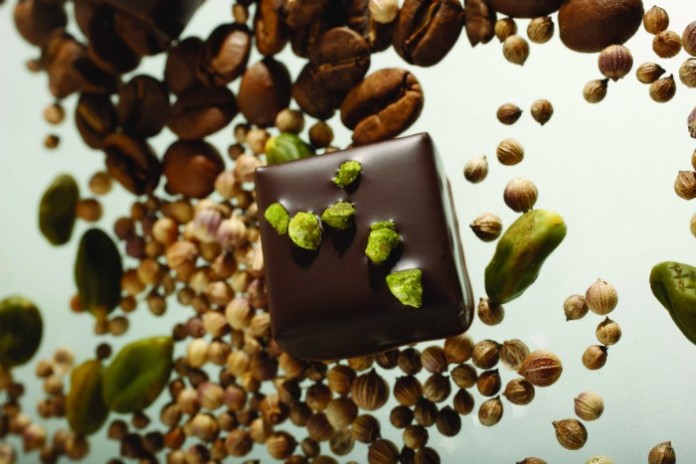 Over the 40-odd years since Robert Linxe, who died last December aged 85, founded the legendary La Maison du Chocolat, France has eclipsed Belgium and Switzerland as the world capital of fine chocolate, with Paris as its epicentre. Although many great Paris-based chocolatiers preceded Linxe by a long shot – such as Debauve & Gallais, suppliers to Marie Antoinette, and À la Mère de Famille, who have occupied the same charming premises since 1761 – he set the blueprint for today’s chocolat revolution.

However, Linxe and the other key founding fathers of Paris’s ‘new wave’ chocolate scene (there are a few mothers, too) didn’t spring from nowhere. Many credit the French chef Gaston Lenôtre as a formative influence in their ascent to chocolate stardom. Normandy-born Lenôtre, a household name in France, started by peddling his homemade chocolates around postwar Paris on a bicycle. By the late 1960s he was the city’s reigning pastry chef, with 60 gastronomic boutiques in 12 countries. Lenôtre’s classes at his eponymous cooking school revolutionised the way French pastry was conceived.

As Lenôtre alumni Pierre Hermé, the current ‘rock star’ of the capital’s pastry scene who was apprenticed to him at just 14, and Michel Chaudun (149 rue de l’Université, Paris 7th +33 1 47 53 74 40), who shuns the limelight but remains a Paris lodestar, would both be quick to point out, it was the chef’s fundamental pastry principles – the freshest ingredients, top-quality cream and butter and, above all, an ethereal lightness – that’s distinguished French chocolate from the beginning.

Linxe, who founded La Maison du Chocolat in Paris during 1978, applied all of those principles to his wares, particularly his famous ganaches – velvety, subtly perfumed centres made from a simple base mixture of high-percent chocolate and cream, whose refinement and finesse distinguish truly great chocolates from the merely excellent.

Besides aligning pastry and chocolate, Linxe’s La Maison set other benchmarks which profoundly influenced both the production and presentation of fine chocolate. With the eloquence, precision and connoisseurship – and vocabulary – usually associated with wine-making, Linxe enumerated the essential qualities of the cocoa beans he sought from the world’s great producers: the Mexican Criollos, Ariba beans from Central America, the Ivory Coast’s Forasteros. His flawless presentation – often referred to as a precious écrin (jewel case) – from boutique to box became the gold standard for chocolatiers across Paris and around the world, and slowly seeped into the public taste at large, changing the way people approached, thought about and discussed chocolate.

Today, nearly every one of Paris’s 20 arrondissements has its own world-class chocolatier – from small artisan chocolate-makers to international boutique chains, such as La Maison du Chocolat. Although they produce chocolate on a grand scale, these boutique chains go well beyond the guidelines that govern their trade – the EU stipulates a minimum percentage of pure cocoa butter and liquor, plus a strict prohibition of low-grade fats for the privilege of the designation – to produce something no less than magnificent. However, these chocolate makers are more influenced by the opinion of the chocolatiers than any governmental edict.

The Club des Croqueurs de Chocolat (Chocolate Cruncher’s Club) are a bunch of prestigious chocoholics who meet monthly, to taste, rate and adulate. The club counts most of the great confectioners as members, and out of the 160 French artisan chocolatiers listed in their guide, 35 are in Paris.

The Croqueurs bestow their influential awards at the international Salon du Chocolat, a cocoa-based bacchanal and showcase that’s held in Paris each autumn. For last year’s 20th anniversary edition, the Croqueurs handed out accolades across a wide range of categories, including best ‘rising star’, ‘new entrant’, ‘tablette’ and an ‘award of excellence’. The coveted award for ‘Best Chocolatière’ went to Anne-Françoise Benoit, one of the rare female chocolate makers on the scene.

For Benoit, chocolate is ‘in the blood’. Her father opened a pâtisserie-chocolaterie in Angers during 1975, when she was seven years old, and Anne-Françoise helped out pretty much from the start. After earning a degree in economics, she decided to fully devote herself to the business, training at the École Lenôtre to perfect her skills. Shortly after opening her very own  chocolate boutique in Angers, Benoit began earning a string of accolades from the Croqueurs: ‘Best Young Talent’ (2003), ‘Prix de la Ganache’ and one of several ‘Best Chocolatiers in France’ (both 2010), before winning last year’s top prize.

Unlike many of her peers, Benoit doesn’t make a big show of her dexterity. Her chocolates are classic, pleasingly accessible and timeless, and include many of the beloved French stalwarts: chocolate-dipped orange slices, mendiants (nuts and fruit suspended in chocolate), palets (chocolate-enrobed nut clusters) and an airy macaron. But Benoit reveals her full mastery in the subtly perfumed ganaches of her superb single chocolates: the delectable ‘Adagio’, a coriander-and pralinéd-lemon ganache delivers the merest hint of crunch, while the velvety ‘TSA’ highlights the richness of Venezuelan cocoa beans. A house speciality unique to Benoit, the ‘Caramande’ – flat triangles of salted caramel and lightly toasted almonds enrobed in dark chocolate which melt in the mouth – is a must-try as they’re perfect as a snack, for serving with coffee or to accompany an elegant dessert.

While Benoit dominates the lower Marais, Jacques Genin (133 Rue de Turenne, Paris 3rd; +33 1 45 77 29 01) is king of the upper part of the quartier, if not all Paris – and you can barely throw a stone in Saint-Germain-des-Prés without hitting a worldclass chocolatier, each of whom boasts their own identity.

It’s not entirely clear at first glance whether the boutique of Jean-Charles Rochoux (16 rue d’Assas, Paris 6th; +33 1 42 84 29 45), just steps from the Jardin du Luxembourg, is a chocolate shop or gallery. But be assured that the charming sculptures in the window – animals, objects, buildings and angels, all chiselled from fine chocolate – are as edible as his famous tiny truffle squares and single morceaux.

Although a beagle-sized calf sculpted in white and dark chocolate might be a novel item for guests to chip away at, his smaller figures – bulldogs, Paris landmarks, busts, birds, turtles, cherubs, etc – make delightful and delicious gifts. However, Rochoux didn’t earn his place as a top chocolatier through his sculpting talents alone as he’s mastered the French art of pairing liquor and chocolate. Rochoux boasts a long-standing partnership with Maker’s Mark Bourbon Whisky (the brand’s ‘red ribbon’ adorns his wares) and also produces a thrilling range of eau de vie-perfumed dark chocolates – ‘Mirabelle plum’, ‘raspberry’, ‘vieille prune’, etc – each of which is more ambrosial than the next. He’s a serious contender for top billing in this chocolate-gorged quartier.

Across the Jardin du Luxembourg, self-professed “alchemist” Franck Kestener (7 rue Gay Lussac, Paris 5th; +33 1 43 26 40 91) offers revelatory creations, even by the high standards of Paris. Kestener’s the only chocolate-maker in the city to have earned both the prestigious designation Meilleur Ouvrier de France (Best Craftsman of France) and the Champion du Monde de Pâtisserie, but he doesn’t rest on his laurels.

His edgy combinations mix fresh fruits, wines and spirits, and spices and herbs for new taste experiences. The stand-outs include the ‘Perle de Lorraine’, a hexagonal chocolate shell perfumed with almond and caramel that resembles a golden Mirabelle plum, with plum ganache and delicately crunchy caramel praline. Then there’s the ‘Pulpeuse’, made from four grand cru chocolates for a rich ganache of dark chocolate and fresh raspberries.

Meanwhile, the bite-sized ‘Petit Gibus’, with fruit-flavoured almond paste and dark chocolate, is utterly addictive, and the glorious ‘Atlantique’, a bar of butter sablé biscuit and caramel enrobed in rich dark chocolate, is much beloved by Kestener’s Parisian aficionados.

Henri Le Roux is a relative newcomer to the Parisian scene – his first boutique opened in Saint-Germain during 2012 and he now has three locations – but one with deep Breton roots and an enviable pedigree. Le Roux started making his velvety caramels and chocolates in 1977, at his shop on southern Brittany’s Quiberon peninsula, just across from Guérande, where the famous sea salt is harvested. His pairing of caramel, made with creamy Breton butter, and sel de Guérande led to the creation of the now-legendary caramel au beurre salé (salted caramel).

In 2003, Le Roux was named ‘Best Chocolatier of France’ and regularly receives honours from the Club des Croqueurs de Chocolat, including a ‘Special Innovation’ prize in 2011, for pairing chocolate with Japanese yuzu lemon and macha (powdered green tea), and a ‘notables’ award in 2014.

Alongside Le Roux’s award-winning chocolates – such as the ‘Alibert’, with a dark chocolate and thyme-scented ganache, and the chocolate-enrobed caramel and Calvados ‘Ch’tou’ – you’ll find excellent pâtes de fruits, caramel-and-chocolate spreads, single-source chocolate bars and, of course, his famous salted caramels.

Although they’re often eclipsed by the more high-profile master chocolatiers, the aforementioned La Maison du Chocolat and Pierre Hermé plus Patrick Roger and Jean-Paul Hévin shouldn’t be missed. In fact, those four alone are well worth a chocolate pilgrimage to Paris.