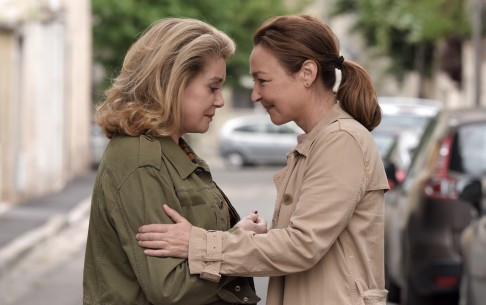 Claire (Catherine Frot) is a talented but tightly–wound midwife and reclusive single mother on the cusp of losing her job as her small maternity clinic can’t compete with the nearby hospital’s ‘baby-churning factory’. Amid the upheaval, Béatrice (Catherine Deneuve) the estranged, and shambolic, mistress of her deceased father turns up out of the blue looking for redemption. Claire is clear, she wants nothing to do with the woman who deserted her 35 years ago and drove her father to suicide. But Béatrice is back for a reason. She has a brain tumour and accounts to settle.

An inveterate gambler and fantasist with a penchant for Pinot for her sins, the free-spirited Béatrice has little in common with her rigid – and sworn teetotaller – ‘step-daughter’. Yet her exuberance and unashamed tendency to emotional blackmail eventually chip away at Claire’s defences and the two seemingly polar opposites soon begin to rely one each other to cope with the circumstances that have thrown them together again.

Teetering between tragedy and hope, Martin Provost’s bittersweet two-hander sparkles with warmth. A moving lesson in forgiveness and laying the past to rest.