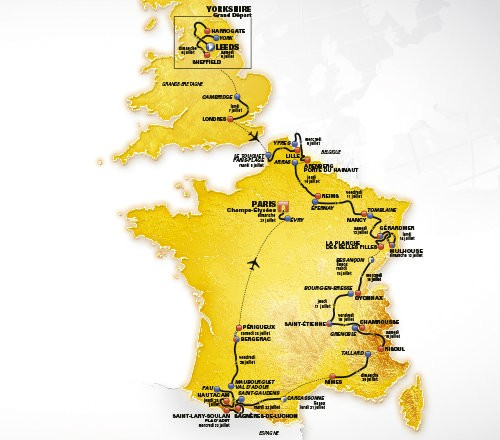 Tour de France fans, take heed. The 2014 course has been announced. With less time trials (only one!), more cobblestones, and ascents in three different mountain ranges (including the Vosges), the organisers aim to shake things up with lots of challenges for the riders. These surprises will no doubt lead to “upheavals in the race hierarchy”— and lots of suspenseful plot twists for spectators.

Starting across the Channel in Yorkshire on July 5, the 2014 course will mark the centenary of World War I by passing sites in the north and east of France where some of the bloodiest battles took place, including Ypres (in Flanders, Belgium), Arras, the Chemin des Dames, Verdun, and Douaumont. There will also be a stage finish in Reims in Champagne country, where—after witnessing the baptism of Clovis and the coronation of the French monarchs—the cathedral suffered tremendous damage during WWI. This commemorative course pays homage to the millions who were killed in the trenches during the Great War, including three Tour de France winners, Francois Faber, Octave Lapize and Lucien Petit-Breton.

In traditional fashion, the 22-day course will conclude on the Champs-Élysées in Paris. The Tour organisers usually set up a large screen at Place de la Concorde for spectactors to get a closer look at the action… since the peloton speeds by in the blink of an eye.

For history buffs keen to learn more about World War I, France Media Group has published a special edition publication for the centenary. Find out more. 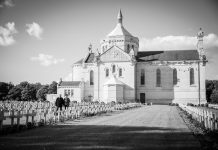 First World War in France: Explore the Memorial 14-18 at Notre-Dame-de-Lorette