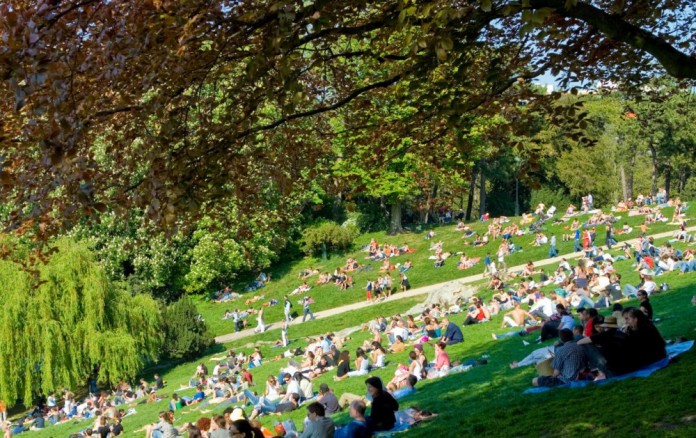 The beaux jours have arrived in Paris, and with the summer temperatures, the quest for the perfect picnic spot. When every patch of grass and every green chair is taken in the Jardin du Luxembourg or the Jardin des Tuileries, where to set up your spread? Our editors reveal some of their favourite spots… Now you just need to supply the wine, baguette, charcuterie, and fromage!

Hidden behind a high stone wall on Rue de Babylone, the Jardin Catherine Labouré was formerly a convent’s potager, and now boasts a vegetable garden, a playground, and a lovely lawn. The advantage of this small grassy eden, besides its hush-hush location, is its proximity to La Grande Épicerie at Le Bon Marché, an epicurean’s delight. (Read our review of the renovated store here.) Another added perk: the original Coutume Café, a bastion of good coffee, is just a stone’s throw away.

True, the Parc Floral can get quite crowded in the summer (just take a look at the incredible children’s play area- complete with a petit train and 6 metre-high slides- and you’ll see why). But the annual Jazz Festival is not to be missed. Every weekend in the summer months, concerts take place in the pavilion in front of a small pond. There’s nothing better to do on a Sunday afternoon than picnic while listening to the music. Tip: Arrive early to make sure you get a spot under the trees on the grass.

Inspired by London’s great parks, Napoleon III recruited Haussmann to oversee a massive urban works project, creating large urban parks at the four cardinal points on the outskirts of the city in the 1860s. The purpose? To supply all social classes with green spaces to saunter and socialise. Orchestrated by the engineer Alphand, Montsouris was the southernmost park, now located in the 14th arrondissement. You’ll find interesting water and rock features, beautiful landscaping, and a small lake with an isle inhabited by black swans, ducks and flocks of geese  (the park staff includes a dedicated veterinarian).

Across the city to the northeast, the Buttes-Chaumont is another Haussmann legacy, one of the largest parks in the city, built atop a former quarry. With waterfalls and grottos filled with artificial stalactites, not to mention the temple atop the soaring butte, this park has a diverse topography… and lots of bobos (bourgeois-bohème) in the summer months, sprawled on the grass or drinking aperitifs at Rosa Bonheur.

Last but not least: Anywhere on the Seine or the Canal Saint Martin! One of our favourite spots on the Seine is on the Left Bank facing L’île Saint-Louis, so you can watch the light fade against the walls of the island’s majestic hôtels particuliers. The newly revamped Berges de Seine is picture-perfect, too.