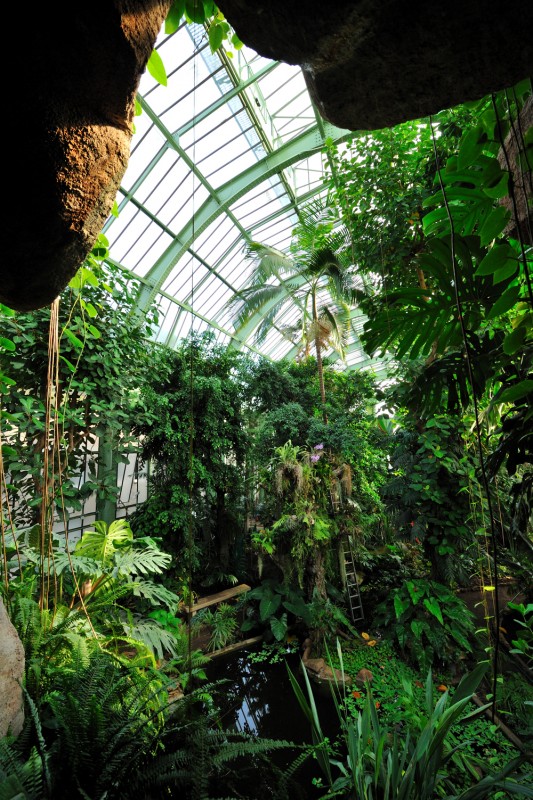 Ever since the first greenhouse was built in the Jardin des Plantes in 1714, to house a young coffee plant sent as a gift to Louis XIV, the serres have been an important feature of Paris’s oldest botanical garden. At that time the garden already had several orangeries, solid structures with large arched windows, built to protect fragile orange trees from the frosts of Parisian winters. But the first real greenhouses, primitive frameworks of glass and wood, had a different purpose—they were designed to acclimatize exotic plants sent to Paris from all over the world, so that scientists at the Jardin could study and document them. The original serres were gradually replaced in the 19th century by large, airy structures of steel and glass, only a few of them open to the public. Now they are all open to visitors, after a five-year, top-to-bottom restoration that was an occasion to rethink their role within the overall mission of the most historically fascinating gardens in Paris.

The Jardin des Plantes began in 1633 when Louis XIII bought a parcel of land, about a quarter of the garden’s present size, destined to cultivate medicinal herbs. At that time the plot was well outside the city, where “the steam of cesspools and the smoke from chimneys will not rob the plants of their morning dew”, according to a contemporary. The plot had two hills; from the higher one—today’s gazebo-topped Grand Labyrinthe—17th-century Parisians could see the spot where the Bièvre, the lost river that now flows underground, joined the Seine.

The idea for the garden had been proposed by Jean Hérouard, a botanist who was also the king’s doctor. He’d seen a similar garden in Montpellier and wanted one in Paris that would grow “all sorts of medicinal herbs for those who need them, even for the instruction of students at the University of Medicine”. Thus, from the very beginning, the Jardin Royal des Plantes Médicinales had a teaching function, a mission it retains today.

When the garden opened in 1640, Guy de La Brosse, who had succeeded Hérouard as the king’s premier médecin, became its first director. This tradition continued for decades—the premier médecin du roi supervised the garden until 1718. In 1738 the “plantes médicinales” were dropped from the title and the garden became simply the Jardin du Roi.

Royal or not, it was always open to the public, thanks to La Brosse, who believed its beneficial herbs, which numbered some 1,800 by the time the garden opened, should be available to the king’s subjects as well. La Brosse was enormously proud of his garden; in an early published description of it, he referred to older medicinal gardens in Padua, Genoa and Florence, claiming that “they only have the advantage of time, not of beauty, size, situation, nor of quality and diversity of plants. There is no garden to equal this in all of Europe.”

La Brosse did not ignore the garden’s educational aspect, planning from the outset that botany and chemistry would be taught there. This provoked a major controversy: the powerful Sorbonne wanted to absorb the garden into the university, but the king overruled the opposition and the garden remained independent, becoming a teaching establishment with professors appointed by the crown.

Even today one of the garden’s most interesting spots is an outdoor classroom called the Ecole de Botanique, a garden with some 4,000 plants and shrubs native to temperate climates. From its inception, this was an open-air laboratory. The arrangement is systematic, with plants laid out according to botanical families and ecosystems. Informative labels give scientific and common names, place of origin and a symbol telling whether it’s an annual or perennial, a shrub or a tree.

Those labels are reminders of a shift in the Jardin’s purpose in the 18th century, a period of intense collection, study and classification of the world’s wonders. As Europe’s greenhouses filled up with exotic specimens collected by scientific adventurers, researchers were busy constructing classification systems to organize all that new knowledge. In the early 1730s, Swedish naturalist Carl von Linné (Linnaeus), who was teaching botany at the university garden of Uppsala, was laying the groundwork for his Systema Naturae (The System of Nature), a short work that presented a hierarchical classification of the plant kingdom still in use today. But Linnaeus was greatly influenced by the work of Joseph Pitton de Tournefort, a pioneering French botanist who’d been teaching at the Jardin des Plantes for 20 years, until his death in 1708.

The Jardin had been actively acquiring exotic specimens since the time of Guy Fagon, the garden’s director until 1718, who had sent collectors to the Antilles and the Levant armed with royal authority. Thus the garden acquired pistachio trees, maples from Crete and a cedar of Lebanon brought as a seedling from England by Bernard de Jussieu in 1734. When the pot the seedling came in broke, Jussieu carried the tiny plant in his hat; today the gigantic tree towers over the garden’s labyrinth.

In light of new discoveries, the Ecole de Botanique was totally reorganized as early as 1774, when Antoine-Laurent de Jussieu, Bernard’s nephew, replaced an earlier system in favor of one developed by his uncle and based on Linnaeus’s system of binary nomenclature. Antoine-Laurent later went on to develop and publish his own scheme. (The arrangement in the Ecole de Botanique continues to evolve—a brand-new sign explains that it’s currently being revised to reflect recent studies on molecular structure.)

The garden blossomed during its glory days under the direction of the remarkable Georges-Louis Leclerc, comte de Buffon. Director for 50 years, from 1739 to 1788, the multi-talented Buffon extended the garden to the banks of the Seine, planted the great avenues of trees, created the labyrinth and started construction on the Amphithéâtre. Originally used for class lectures and Revolutionary meetings, the amphitheater was later the scene of important discoveries made by chemist Joseph-Louis Gay-Lussac and others in the adjoining laboratories. Henri Becquerel discovered radioactivity here in 1896, later sharing the 1903 Nobel Prize for physics with Pierre and Marie Curie.

By the time of Buffon’s death in 1788 the garden contained over 6,000 plants. Biologist Jean-Baptiste de Monet, chevalier de Lamarck, one of the garden’s luminaries who would go on to develop a revolutionary theory of evolution well before Darwin, was among the first to write a work on botany for non-specialists. His Flore Française, published in 1778, was the first book that showed the general public how to identify plants for themselves. It was truly the Age of Enlightenment.

The classification issue would eventually became a thorny one, first dividing the scientific community between adherents of Linnaeus’s system and that of Antoine-Laurent de Jussieu; and later, when Lamarck’s theory of transformisme clashed with the prevailing view—dubbed fixisme—espoused by the Jardin’s director, Georges Cuvier.

But that controversy belongs to the second half of the story, picking up the tale during the French Revolution, when the Jardin underwent a huge growth spurt, becoming the Muséum d’Histoire Naturelle, with seven departments—botany, chemistry, zoology, anatomy, anthropology, geology and mineralogy—and one of Europe’s first zoos.

Meanwhile, the newly reopened serres are a wonderful excuse to discover or revisit the garden where all this tumultuous history took place. The visit starts at the Grande Serre, where paths wind past pools and fountains through a humid, verdant forest of towering palms, bamboo and flowering plants. Alongside it, a narrow greenhouse displays desert plants. And two historic serres never before open to the public are now devoted to the Jardin’s new assignment: celebrating biodiversity. One houses the flora of the French territory of New Caledonia; the other explores the history of plants.

The 64-acre Jardin has plenty of other points of interest too. Besides the Ecole de Botanique, there are gardens of roses, irises and peonies; formal flowerbeds on the central lawns; an enchanting Jardin Alpin with mountain plants from all over the world; and a Jardin Ecologique, a wooded enclosure closed to visitors but visible from its perimeter, where nature is allowed to run wild.

Largely overlooked by tourists, the Jardin des Plantes is a favorite with French families who stroll here, sometimes three generations together, admiring the flowers and the animals in the little zoo, and buying barbe à papa (cotton candy) for the children. Join that leisurely throng and you’ll enjoy a piece of Paris history, miraculously preserved for centuries, with all its charm intact.

Originally published in the June 2010 issue of France Today