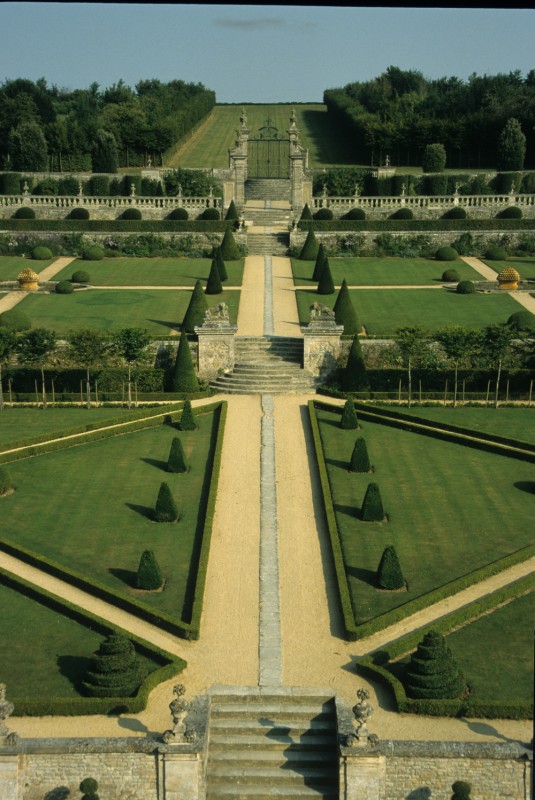 Ever since Adam and Eve were expelled from Paradise, mankind has been striving to recreate Eden on earth. Brécy, the most dazzling small-scale 17th-century formal garden in private hands in France today is just such a recreation. An idealized version of the world in which order and symmetry reign, it is an earthly haven far from the chaos of imperfection. Brécy possesses all of the attributes of the hortus closus, the enclosed garden, a privileged precinct of tranquility whose walls hold nature at bay in order to preserve rarified visions inside.

Situated in a stretch of gently rolling terrain near Bayeux, close to the English Channel, Brécy basks in a temperate climate. Normandy has long been associated with superb gardens, and this area of Basse-Normandie is rich in examples. None, however, offers a more eloquent display of formalist aesthetics than Brécy. Because it is partially hidden in its own diminutive vale, the visitor happens upon Brécy unexpectedly—the surprise factor is spellbinding, and the visual seduction is immediate.

Although only a few hours’ drive from Paris today, in the 17th century it would have taken several days to reach Brécy from the capital. Early visitors were no doubt bowled over by the sudden sight of this sophisticated gem situated on the far-flung margins of royal Ile de France. Even today, the striking refinement and Cartesian logic of this man-made landscape remain an anomaly in the pastoral symphony of the surrounding fields bounded by woods, the bocage normand.

Much of Brécy’s early history is based on incomplete archives, spotty records or supposition. Even today, much remains unknown. King Richard I—the Lionhearted—is purported to have been the first Seigneur of Brécy during the second half of the 12th century. Traces of medieval foundations dating from that period remain on the site. Departmental archives suggest that the present manor house was most likely built sometime between 1626 and 1636 by an unknown architect for Philippe Labbey. It was sold to Jacques I Le Bas in 1638. The manor house is clearly Louis XIII in style, whereas the monumental entry portal to the forecourt and the formal gardens, Baroque in character, are thought to be later additions by Le Bas who probably commissioned them in the late 1660s. Although the manor may have been built by a master mason, the portal and the gardens appear to be the work of an accomplished architect, familiar with contemporary aesthetic notions in vogue at court.

Because of landscape architect and designer André Le Nôtre, who completed the gardens of Vaux-le-Vicomte in 1661 and began his work for Louis XIV at Versailles the following year, the 1660s were a particularly prolific decade in the history of French gardens. With the assumption that Le Bas had Brécy’s gardens laid out toward the end of this decade, his choice of landscape architect indicates that his taste was more in sync with cutting-edge courtly aesthetics than with the era’s charming, but less grand, provincial modes of landscape design.

Remarkably, Brécy remained in the Le Bas family for almost two centuries. Subsequent owners included Rachel Boyer, the celebrated actress of the Comédie Française, and Jacques de Lacretelle, novelist and member of the Académie Française, who worked at renovating both house and garden. During the past 15 years, the current owners have made Brécy the object of one of the most successful garden restorations in the world.

Stepping over the threshold into the gardens at Brécy is like Alice’s arrival in Wonderland. Formal terraces, intricate parterres and handsome fountains abound in this somewhat countrified version of grand siècle gardening with a unique Italianate flair. Jacques de Lacretelle said of Brécy that it possessed “the finery of an Italian princess thrown over the shoulders of a little Normandy peasant girl”. And yet, the ensemble is ultimately under the spell of the Sun King. An anonymous report in the June 3, 1903 edition of L’Eclair called Brécy “…a little Versailles lost among the fields”. Little is the operative term here, for the entire house and garden occupy a single hectare (2.47 acres). Surprisingly, the small site manages to sustain the ambitious landscaping—Brécy captures the infinite in the finite.

Composed of four terraces, each with its own distinct character, Brécy’s formal gardens ascend from the back door of the manse, much like an opulent stage set. At any moment, a dramatic performance seems ready to unfold. If the introductory parterre and four connected terraces are the acts of the drama, then the eleven staircases connecting them are the intricacies of the plot, and the ensemble promises a formidable denouement in its grand southeastern exit gate.

The magnificence of the multiple terraces is enhanced by a vast sculptural program that makes Brécy one of the most luxuriously furnished gardens of Europe. Seemingly endless sets of retaining walls and stone balustrades announce a stunning succession of terraces. Upon them, legions of ornate pots à feu—stone urns capped with a stone flame—vie with finely carved vases of flowers and fruit in an infinite array of decorative elements, ever-theatrical in their allure. This theatricality is at once central to Brécy’s formal aesthetic and its most distinguishing feature.

Like giant stairs, Brécy’s four terraces ascend toward the southeast. They are intersected by a strong axial path whose function is to lead the eye toward the gate, up to the horizon, and to the sky beyond. This axis is the backbone of the landscape as well as the design element that creates its single-point perspective. It is also the feature that amplifies the formal nature of the ensemble.

The genius of the design, however, offers even more. A terrestrial Eden with celestial aspirations, Brécy seems to resist gravity. As the garden’s axial line stretches from the manor house’s back door to ascend the subtle rhythm of the terraces, it swiftly bursts through the monumental gate at the site’s southeast boundary and soars into the sky. Terrestrial and celestial realms suddenly intersect, and the result is visual drama par excellence.

Poised at the threshold of a new era in landscaping, Brécy’s medieval and Renaissance roots gave rise to innovative notions of Baroque formality, as epitomized by Versailles, that are the hallmark of 17th-century garden design, and France’s most significant contribution to landscape aesthetics.

Although the original architect remains anonymous, whoever constructed Brécy’s gardens was well-educated, well-traveled and, above all, extremely knowledgeable about contemporary theories of landscape design. There was also a keen understanding of the golden section, demonstrated here by the sophistication and elegance of the landscape’s proportions. The Cartesian logic of the layout, along with graceful optical illusions, makes for an overall aura of infinite harmony—the hallmark of the arts in France during the golden age of the Sun King.

Gardens are fragile markers of human aspirations. Architectural ensembles may last centuries with little care, but a landscape can disintegrate with only a few decades of neglect. Abandoned at the Revolution, the gardens of Brécy continued on a steady downward spiral of decay throughout the 19th century. World War II and the Normandy invasion might well have been their death knell. Situated just five miles south of Gold Beach and directly in the path of the Allies’ advance in June 1944, the domain was spared only because, by the evening of D-Day, the British army had already passed beyond it. Despite the long and bitter battle to enter Caen, only 13 miles away, Brécy was not bombed and no battles raged in its immediate environs.

No longer a vestige of past glories, the house and garden have been awakened from their slumber and accorded a new lease on life. The enduring power of the place has been set in stone by its present owners, who acquired Brécy in 1992. In the years since, they have undertaken a sweeping and meticulous restoration, with a host of appropriate additions, that has given the site its present noble allure, striking an astute balance between Brécy’s architectural and vegetal proportions.

Boxwood hedges in geometric and embroidery patterns, and the addition of seasonal flowerbeds, have re-energized the stark linear alignment of the terraces. Well-ordered harmony now resonates across each topiary, through every balustrade, and beyond the garden walls to the carefully calibrated orchards beyond.

This is most striking when, in the early morning light, the gardens are viewed from the lofty cupola that crowns the manor’s roof. Allowing a 360-degree view of the gardens and the surrounding countryside, the resplendent panorama from the belvedere is a painting of perfection. The view evokes what André Hallays referred to as Brécy’s “charme singulier” and what La Varende called its “inexplicable magnificence”. This paradise, once on the verge of being lost, is now miraculously regained.

Originally published in the May 2008 issue of France Today; updated in June 2012