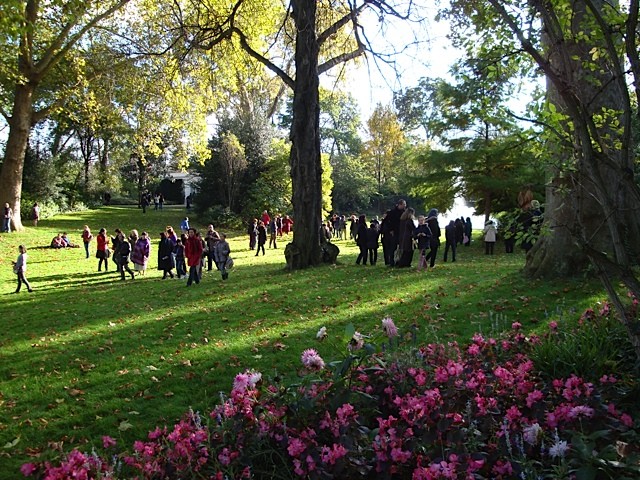 Hundreds of Parisians and visitors waited in line for more than two hours on Sunday to see the gardens of the Elysée Palace. As announced recently by President François Hollande, from now on the formerly very private gardens will be open to the public on the last Sunday of every month, from noon to 5 pm October through March, and from 1 to 7 pm April through September.

Until now, the gardens were open only to VIPs invited to the annual Bastille Day garden party on July 14, and to members of the public willing to wait in extremely long lines during the Journées du Patrimoine, one weekend in September every year.

The Palais de l’Elysée—a private mansion rather than a full-fledged palace—was built between 1718 and 1722 for the Comte d’Evreux, on what was then a plot of swampy land amid pastures and small farms. The original gardens were formal and symmetric, à la française, inspired by André Le Nôtre’s work at Vaux-le-Vicomte and Versailles.

In 1753 Louis XV bought the palace as a gift for Madame de Pompadour, who enlarged the gardens and added cascades, labyrinths and a grotto. In 1773 the new owner, financier Nicolas Beaujon, transformed the central terrain into a rolling expanse of lawn bordered by sinuous wooded groves, adding statuary, a fountain and a heated greenhouse—a much more informal garden à l’anglaise.

Beaujon sold the estate to Louis XVI, who turned the mansion into a guest house for foreign ambassadeurs extraordinaires, and later sold it to the Duchesse de Bourbon, who embellished the gardens with an artificial river, a lake, a pagoda, thatched cottages, obelisks and other fantasies. Napoleon I pared down the excesses to better show off the splendid plane trees that today are among the tallest in the city.

The Elysée has been the official residence of the French president since 1874. The gardens were completely renovated in 1992, with new varieties of trees and shrubs added, and revised again 1996 by star gardener Louis Benech. Today they cover nearly four acres, including 75,000 square feet of lawn bordered by cypress, maples, chestnuts, lindens and plane trees, stretching from the ornate gated entrance on Avenue Gabriel to the beautiful classic facade of the 18th-century mansion, with its gilded iron balconies. The nine 21st-century gardeners now use no pesticides, fallen leaves are mulched, and bees, ladybugs and butterflies are encouraged.

Those who braved the long Sunday afternoon wait to get through the gate—known as the Grille du Coq, for the golden rooster on top—were free to wander through the beautiful grounds at leisure, for as long as they liked. Those who were there around three o’clock caught a flash appearance by President Hollande, who strolled briefly through the crowd on the lawn, ducked inside and then popped out on the balcony for a quick wave. 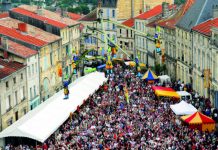 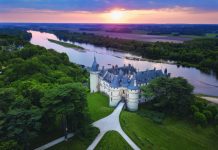 Inspired by Nature: Château, Gardens and Art of Chaumont-sur-Loire