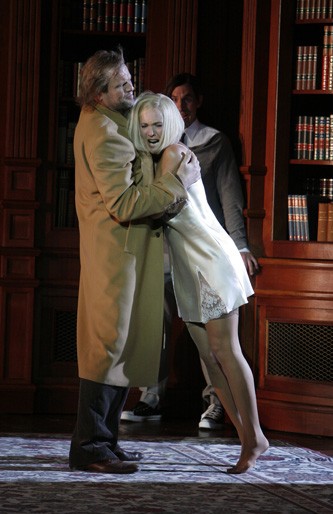 This article is the first in a series on the 2010 Aix festival. Read the other articles in our Culture section.

Nothing can ever be really bad at the Aix Festival, especially not any production held, like this one, in the enchanting outdoor courtyard of the 17th-century Episcopal Palace. And this Don Giovanni has a lot of redeeming values too, notably superb performances by American bass baritone Kyle Ketelsen as Leporello and German soprano Marlis Petersen as Donna Anna. The period-instrument Freiburger Barockorchester, conducted by Louis Langrée, plays with exceptional clarity and grace, and the English Voices chorus is excellent.

When the blistering heat of the day gave way to a soft Provençal summer night, with a whisper of a breeze and stars overhead, the stage was set for the festival’s usual lyrical sorcery. Instead, Mozart had to duel for attention with Tcherniakov’s confusing attempt at a satirical send-up. Characters have been rearranged willy-nilly, dressed in a mixed-era, mixed-season mélange of costumes that might have been plucked arbitrarily from a touring company trunk.

Leporello is no longer Giovanni’s servant but a friend of his wealthy family; Donna Elvira is no longer a seduced, abandoned and forgotten former conquest but Giovanni’s ex-wife; Zerlina is not a young peasant girl but Elvira’s daughter by a former marriage; no one is masked or disguised, but mistaken identity reigns supreme; everyone is constantly removing everyone else’s clothes, Don Giovanni’s leer is more like the grin of a village idiot, and Zerlina sings her delicious consolation aria Vedrai, carina not to her fiancé Masetto but to Don Giovanni’s coat. Go figure.

Danish baritone Bo Skovhus, a veteran Giovanni, delivers the familiar role with full-voiced assurance, while struggling valiantly with Tcherniakov’s strange vision, jumping up and down and flopping his arms like a crazed cockatoo. Canadian tenor Colin Balzer provides a finely tuned performance as a bespectacled bourgeois Don Ottavio, and the rich, stentorian authority of Russian bass Anatoli Kotscherga’s Commendatore ends the evening with a welcome flourish. It’s a fight to the finish, but Mozart wins again.