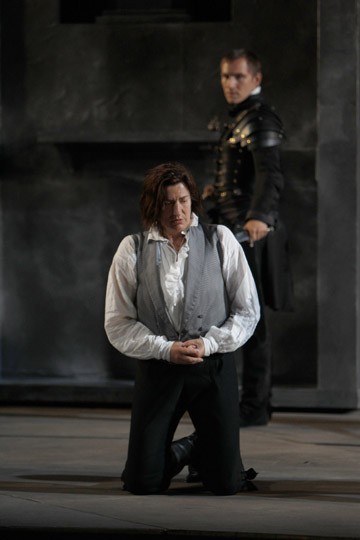 Thursday was another perfect evening in Aix, cooled down and almost breezy after the intense heat of the sunny day. Dinner on the terrace of a small bistrot in the big Place des Cardeurs meant there was only a short walk down cobbled streets to the outdoor theater in the courtyard of the Episcopal palace for the 9:30 pm, just-at-twilight curtain.

Mozart was the original raison d’être for the Aix Festival when it was founded more than six decades ago, and he’s usually on hand with at least one opera every year. This time around it’s La Clemenza di Tito (The Clemency of Titus), the composer’s second-to-last opera, commissioned to celebrate the coronation of Leopold II as King of Bohemia in 1791 and completed in just a few months, while he was still working on The Magic Flute.

Based on a libretto by the poet Piero Metastasio written nearly a half-century earlier, La Clemenza is a near-tragedy with a happy ending about the Roman Emperor Tito (Titus), a ruler so determined to remain true to his virtuous convictions that he eventually forgives all who offend him, including Vitellia, who dreams of marrying him in order to gain the throne, and plots to have him killed when he chooses another bride; and Sesto (Sextius), his close friend, so in love with Vitellia that he agrees to kill Tito for her.

David McVicar’s production here is strictly old-fashioned, set against the backdrop of a Roman building that looks almost exactly like the 18th-century Neo-Classical mansions of Aix in the surrounding streets. Most of the rest is just in the way—a clunky temple staircase, a pointless gliding grill and a garish, goofy statue of Titus, unveiled at the end—with a blood-red head and silver tunic—that looks as if Jeff Koons might have dropped by the Roman Forum. And in a pointless jump across the centuries from one emperor to another, most of the costumes—all in black or white—are Napoleonic.

Although the pace set by Sir Colin Davis, conducting the London Symphony Orchestra, was far to slow, the cast is mostly marvelous.  American tenor Gregory Kunde, gamely rushing in from San Francisco to replace an ailing John Mark Ainsley in the title role, was understandably not at his best on opening night, but handled the job well.  Also a last-minute replacement, as the sweet Servilia, young Algerian soprano Amel Brahim-Djelloul has a stage presence as lovely as her voice, and her duet with young English mezzo-soprano Anna Stephany is one of this production’s many high points. Powerful Italian soprano Carmen Giannattasio managed to make even the conniving Vitellia sympathetic. But the star of the show is the splendid English mezzo-soprano Sarah Connolly, lithe and totally at ease in the trouser role of Sesto, vocally and theatrically in top form.

The opera ended well after midnight, but no matter how late it’s always nearly impossible to resist the traditional opening-night reception on the rooftop garden terrace after the show, where sponsors, singers, musicians, opera regulars and the press gather for champagne, wine and a buffet supper. Among the happy few sipping champagne, tenor Kunde talked about his speedy departure from San Francisco, where he had been performing Beethoven’s Missa Solemnis with the San Francisco Symphony, to fill in here for the title role, with not even enough time to stop at his home in Rochester. But the gregarious and enthusiastic Kunde said he was delighted to be in Aix, and performing here for the first time.