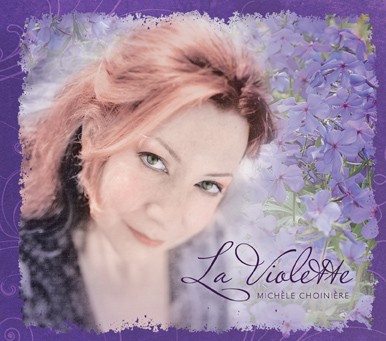 In her new CD, La Violette, singer Michèle Choinière gives voice to the little-known musical heritage of French-speaking Vermont. Raised in the woods of northwestern Vermont with French as her mother tongue, Choinière learned the region’s musical traditions from her parents, from the simple songs sung by her mother as she worked in the kitchen to the harmonica tunes played by her father. Music also reigned at soirées, kitchen parties at which friends and family would gather with their fiddles, accordions and harmonicas, push the table into the corner and dance, drink and sing.

La Violette includes songs passed down in a strictly oral tradition from these soirées—some are upbeat dance tunes; others are comical; one is a sad ballad in which a tinkling piano backs up Choinière’s pleasant, lilting voice. The traditional party song Par un Samedi Matin was sung at her parents’ 1957 wedding, and her 81-year-old father joined the band on his harmonica for the recording.

Nearly all of New England’s French speakers emigrated from Canada, and most were so eager for their children to assimilate into American society that, even while growing up, Choinière was aware that her peers could no longer speak French. She now jokes that she’s Vermont’s only remaining Franco-American.

Hoping to preserve this fast-disappearing heritage, the singer started mining musical archives, seeking out recordings of elderly local singers, researching decades-old French Canadian music, and tracking down songs from France that were popular in rural Vermont. The result is a tuneful and poignant collage of distinctly French traditional music that includes courtship songs, several country-style numbers from Quebec and one Acadian lament, topped off by two Piaf songs, Tu Es Partout and the classic Padam, Padam. Choinière’s supple voice is backed up by instruments that reflect the music’s simple origins—piano, fiddle, bass, mandolin, guitar and accordion, augmented by bones and stomping feet.

Not just a nostalgic glance backward, La Violette also looks to the future—the singer dedicated the CD to her three-year-old daughter Isabella, “in hopes that she will continue the Franco-American song traditions of her family for generations to come”.