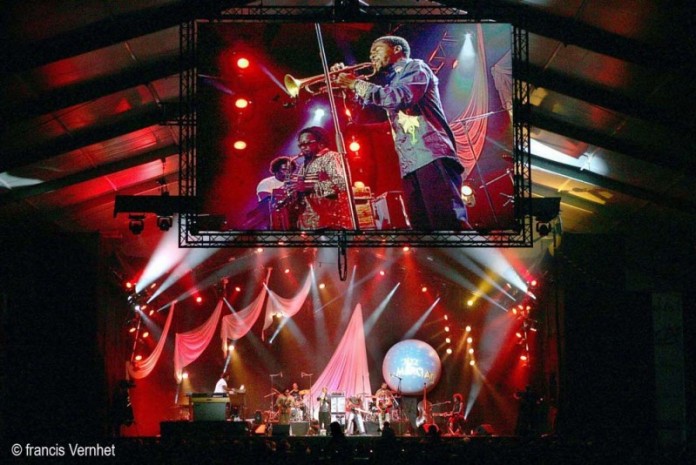 The small Gascon town of Marciac in southwest France enjoys a quiet existence, much as it has done since it was founded by local nobility in the late 13th century. Rolling fields and vineyards unfold around this ancient, fortified bastide—a medieval new town—and in the distance, to the south, the far pavilions of the Pyrenees loom large with their silent snow-capped peaks. Most of the year the loudest presence in the town is the carillon of the local church, Notre Dame de l’Assomption, whose bells have been tolling the hours and summoning the faithful for the past 700 years.

All that changes for two weeks in early August, when Marciac is totally transformed, and the normally placid place pulsates. The faithful who flock to the town for this summer fortnight are not the pilgrims of yesteryear bound for Santiago de Compostella, across the mountains in Spain, but jazz fans whose growing numbers have enabled Marciac to challenge Switzerland’s Montreux as Europe’s premier jazz venue. However it’s ranked, though, Marciac is incontestably one of the best places in the world to hear jazz in all its many varieties, whether that be trad, acid or all that’s in between. This year, jazz legend Wynton Marsalis will once again top the bill, as he has for the past 18 summers, but there will be other major stars aplenty, including Diana Krall, Gilberto Gil, Ahmad Jamal, Allen Toussaint and the Chick Corea Freedom Band.

Like the festival’s performers Marciac’s jazz fans come from all over the world, but the staunchest supporters are the French themselves—a dedicated bunch who won’t hesitate to hush you if you dare to whisper during a performance, no matter how much noise the folks on stage are making. This Gallic love affair with jazz may come as a surprise to those who have difficulty remembering any French jazz greats, with the possible exceptions of Django Reinhardt and Stéphane Grappelli—one of whom technically wasn’t even French. (Reinhardt was a Belgian-born gypsy whose family moved to the outskirts of Paris when he was young.)

But the locals will reply that they are jazz connoisseurs just as much as Americans are, and that music whose spiritual home is the French quarter of New Orleans automatically belongs to the French as well. And let us not forget that during World War II, when the Nazis banned jazz and swing from countries they had conquered (Adolf Hitler considered jazz to be decadent and subversive—”jungle music” according to his propaganda henchman Joseph Goebbels), it was the French who carried the torch for jazz in occupied Europe, defying the Germans with clandestine performances. After the war France’s jazz reputation was further enhanced with the opening of the legendary Caveau de la Huchette in the Latin Quarter of Paris, a jazz club that became a magnet for most of the American jazz greats and is still going strong.

How and why Marciac came to host to an annual jazz extravaganza is a long story, but most of the credit must go to a handful of local enthusiasts back in the 1970s, led by the indefatigable Jean-Louis Gilhaumon, who was then principal of the local high school and would go on to become Marciac’s mayor and the festival’s producer. Gilhaumon and others decided it would be a good idea to enliven the summer—and no doubt fill the empty space between rugby seasons—with some live jazz. And they liked the idea of August, a quiet month before the serious and time-consuming business of harvesting grapes to produce the region’s Armagnac gets under way.

So it was that in 1978, Gilhaumon persuaded Kentucky-born trumpeter Bill Coleman, then living nearby, to lead a jazz concert in the town’s small bullring (Spain is really not far away), and Coleman in turn brought along his French pal Guy Lafitte, a jazz composer and one of Europe’s finest tenor sax players. The concert was such a success that it was decided to make it an annual event, with an empty furniture factory as the venue. Early festivals featured mainly local bands, but gradually ambitions grew and, aided by honorary festival presidents Coleman and Lafitte, it wasn’t long before Marciac was attracting the likes of Dizzie Gillespie, Lionel Hampton, Stan Getz, Oscar Peterson, B.B. King, Herbie Hancock and Sonny Rollins, who kicks off the festival this year, aged 79. It also widened its musical horizons, catering to those who like their jazz—which remains the festival’s raison d’être—but are not averse to a bit of blues, soul, salsa or world music on the side.

Now in its 33rd year, Jazz in Marciac is so popular that it has outgrown the old furniture factory and the main events are staged in a massive tent pitched on the town’s rugby ground. Although the big top can hold over 5,000 fans, most of the big name concerts sell out quickly so it’s wise to book ahead. But even if you can’t get into the tent for the main attractions there’s no shortage of jazz to be heard. Marciac’s medieval main square—luckily one of the largest in the region—stages free daytime concerts throughout the two-week festival to showcase new and rising talent. Visitors can wander around, sit and listen to the music, sip the local Gascon wine or Armagnac and sample not only the regional food (think foie gras and duck in a bewildering variety of permutations) but, as befits an international festival, cuisine from around the world. And because this is France the main events are programmed to start after everybody has had time to enjoy a splendid dinner in one of the local restaurants or in one of the many temporary bistrots that spring up for the festival.

Regulars at the festival will no doubt hope that Marsalis’s program includes his own tribute to the festival—the so-called Marciac Suite, a 13-part homage to the town, the region and festival founder Gilhaumon with titles like Loose Duck, Armagnac Dreams, Sunflowers and Jean-Louis is Everywhere. What they won’t be hoping for is a repeat of what happened when Marsalis premiered the Marciac Suite back in 1997. Halfway through the performance Guilhaumon dashed on stage to announce that a dangerous storm was heading for the town and the tent would have to be evacuated immediately. It was speedily cleared and no damage was done by the passing squall. Disappointed faces abounded after the abandoned concert, but when it comes to Marciac and jazz, it seems an ill wind can blow some good: the next day Marsalis and his quartet were themselves blowing up a storm, treating the town to a free concert of the entire Suite. No wonder the good people of Marciac have erected a life-size statue of Marsalis. Don’t miss him, or the festival.

Originally published in the July/August issue 2009 of France Today; updated in July 2010