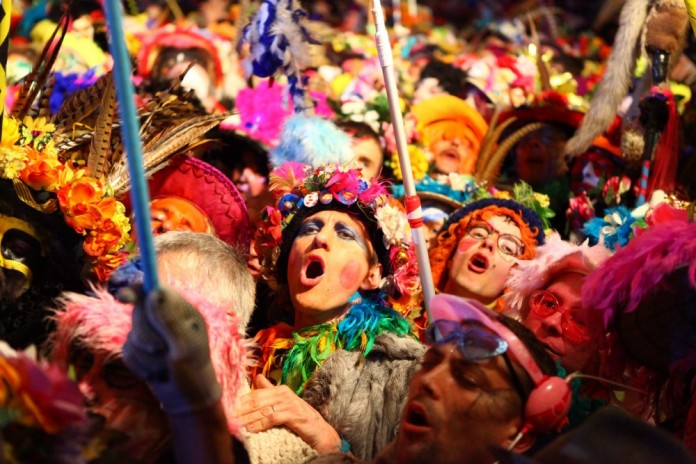 In 2008 French comedian Dany Boon’s movie Bienvenue chez les Ch’tis took France by storm, breaking all box-office records. Set in Bergues, in the wretched “sticks” of northern France, reputedly a vast stretch of beet and potato fields and not much else, the comedy revealed a warm-hearted community whose generosity and proffered friendship largely compensated for the northern shortage of sunshine. The immense popularity of the film gave a big boost to tourism and the local economy, and also spoke volumes about the generous human values cherished by the French.

It’s at carnival time that this gregarious northern spirit manifests itself best, most famously in and around the seaport of Dunkerque, where festivities continue over 12 weekends between Epiphany and Mardi Gras—from early January through March or early April. The long lead-up culminates on the last three days—Les Trois Joyeuses.

Unlike the Carnival in Nice, world-renowned for its spectacular flower-covered floats, there are no floats here at all, but mass processions, with everyone getting into the act. This is not a carnival to watch but to be part of—on fait carnaval, or one does carnival, as the expression goes—and it’s a genuine experience of solidarity and friendship for those taking part, les carnavaleux. As in medieval times, everyone lets go in a frenzy of mirth before the 40 lean days of Lent, traditionally a time of fasting and penitence. Indeed, the word carnival may derive from the Latin carne levare, to remove the meat, or carne vale, farewell to meat. Carnival was the one time a year when the world turned upside down, when social codes were broken and all license permitted. Celebrating in disguise, all were social equals and even genders could be swapped.

Men here often get gussied up with big boobs, flowery hats, bright-colored wigs, miniskirts and garter belts, but in any case costumes are usually garish, humorously irreverent, at times grotesque, but also comfortable, for this is a very physical and energetic carnival. On cold days it is not unusual for the processions to be shrouded in a dreamlike fog generated by huge crowds literally working up a steam. For greater ease, too, faces are wildly painted rather than masked. On the final Sunday morning, visitors can have their faces done at the tourist office, and costume paraphernalia can be bought at the Saturday market.

The carnival’s emblematic umbrellas also reflect its spirit of derision. Known as berguenaeres, they were probably introduced to mock the people of nearby Bergues, who—accustomed to drizzly winters—used to turn up carrying umbrellas.

Dunkerque’s history begins circa 800 AD, with a fishing settlement founded on dune-covered shores—hence Dunkerque ,meaning “church on dunes”. Despite the carnival’s medieval spirit, no tangible record of medieval festivities has survived. Sitting across the Channel from England amid 16th- and 17th-century Europe’s other sea-trading rulers—France and Spain with its annexed Netherlands and Flanders—Dunkerque changed hands several times and was eventually sold to Louis XIV by Charles II of England in 1662. The Sun King imposed the French language, although his famous local privateer, Jean Bart, spoke only Flemish. But the people persisted in thinking in Flemish, and they have since recovered their own patois, consisting of some 700 words—Dunkerque is the only town in France with its own spoken vernacular.

Credited with saving Dunkerque from famine, Jean Bart became the town’s hero. His tall bronze statue, by David d’Angers (1845), was miraculously spared while the rest of the town was reduced to ruins during World War II. Today Bart is commemorated by an almond and coffee-cream pastry coated with milk chocolate, le doigt de Jean-Bart, or Jean Bart’s finger. Above all, he is the carnival’s idol, praised in song, although there is no direct connection between the two, since Bart died in 1702 and the “modern” carnival dates to some 50 years later. The carnival is thought to have been revived via the farewell banquets offered by ship owners to fishermen and their families before the annual departure to Iceland for their six-month cod-fishing voyages. The banquets were held in a tavern on the Quai des Hollandais, and must have resembled the colorful depictions in Brueghel paintings. Since the departure often coincided with Lent, it’s presumed that the fishermen’s merrymaking eventually spilled out into the streets and evolved into a carnival.

That would explain why the processions are called Visscherbende—fishermen’s bands. The most spectacular is held in the center of Dunkerque on the Sunday before Mardi Gras, opening Les Trois Joyeuses, followed on Monday and Mardi Gras itself by the bende from the neighborhoods of La Citadelle and Rosendaël. At 5 pm on Sunday, some 1,100 pounds of herring are thrown from the Hôtel de Ville’s balcony to the throng in the square below by the mayor of Dunkerque and his aldermen. The din is incredible as the crowds down below claim their due. This popular ritual was introduced only in the 1960s, and plastic lobsters have since been added because homard (lobster) rhymes with Delebarre, the name of Dunkerque’s long-standing mayor, fueling the already well-fueled chanting. As a further nod to the probable fishermen founders, the musicians sport navy-and-white-striped shirts and yellow slickers.

Fish is not all that’s tossed into the thematic soup, however. Heading the music band, the drum major sports a Napoleonic uniform, and the fifes and drums are Napoleonic too. The brass instruments, added in 1924, are now an indispensable element, every so often sounding the signal to start the chahut, a codified melee when the crowd is deliberately held back by the first rank of the procession, usually made up of robust fellows who look like rugby men.

Then everything goes back to normal, fifes and drums resume their upbeat tunes and the crowds their bawdy or nonsense songs, until the next chahut. Until recently, the bende were all-male affairs and even today there aren’t many women in the front ranks. The young, old, frail or inexperienced are advised to stay farther back. It all ends at the Place Jean Bart, where the carnavaleux kneel before the privateer’s statue for the boisterous Cantata to Jean Bart.

Predating Bart and probably a vestige of the Middle Ages, Reuze Papa is a giant puppet honored with a separate parade. It starts at the Leughenaer Tower (Liars’ Tower, so called because it misled enemy ships as a false lighthouse). It was once customary for every town in Flanders to have its own giant (reuze in Flemish), often with its own giant family. Dunkerque’s is based on the legend of the 7th-century pagan Norseman Allowyn who came to loot the land, but was wounded by his own sword, cared for by King Dagobert’s minister and the city’s patron Saint Eloi, converted and married off to a local maiden. The giant Allowyn, 26 feet tall and made of wicker and cloth, was brought out on special occasions, carried by 12 men, and made to dance to fifes and drums. In the course of history, he lost his head to the French Revolution, and lost it again accidentally on a couple of later occasions, notably in the early 20th century, when he was decapitated by the electric wires of the new tramway. Today’s Reuze is accompanied by his giant wife, la Reuzinne, their three children—Pietje, Miesje and Boutje—and six guards: Gélon, Allowyn, Dagobert, Goliath, Roland and Samson, a happy coterie drawn from historical, biblical and apocryphal sources.

If the processions are the most visible element of the carnival, for all to join in, the indoor charity balls at Le Kursaal, Dunkerque’s convention center, charge admission fees; space is limited and tickets hard to get, although the tourist office can sometimes help. La Nuit de l’Oncle Cô, on the Saturday before Mardi Gras, is the best. The so-called chapelles, open-house gatherings, provide a link between the processions and the balls, where locals wind down among friends, making merry before heading for further frenzy in the ballroom. It’s here that the convivial northern spirit truly comes into its own, as residents open their homes throughout the carnival season, feeding friends onion soup and regional savories. Unfortunately it’s one heartwarming aspect of carnival that most visitors cannot share.

Thirza Vallois is the author of Around and About Paris, Romantic Paris and Aveyron, A Bridge to French Arcadia. www.thirzavallois.com. Find her books in the France Today Bookstore