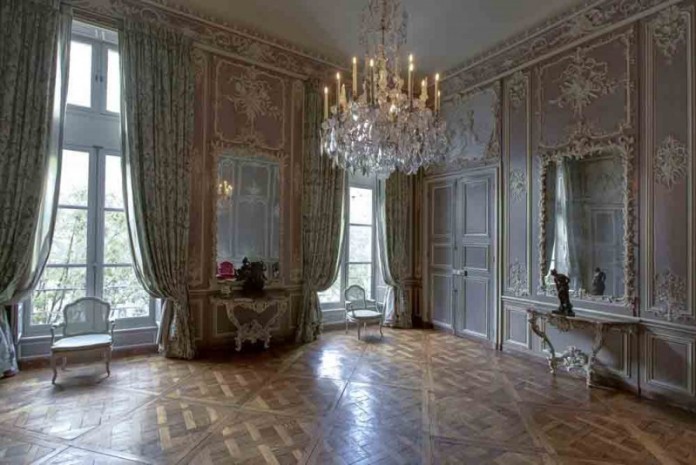 It’s one of the most glorious interior spaces in Paris—a vast, light-filled room with slender iron columns branching out far overhead into graceful vine-and-flower-patterned arches, supporting a roof of twin barrel vaults. Huge windows and hundreds of glass-shaded lamps light a sea of long tables where readers sit, quietly turning pages, taking notes or tapping on laptops. Computer catalogs stand next to sculpted heads on pedestals and a staff desk is backed by a jewel-toned Gobelins tapestry. Marveling at the gorgeous juxtaposition of old and new in the Bibliothèque Sainte-Geneviève, I wondered why it had taken me so long to discover the delights of the city’s historic libraries.

I worked for years as a librarian in academic libraries and rare book collections in the US and, during my stays in Paris, regularly used its public libraries. But it wasn’t until a friend pointed me toward the Sainte-Geneviève that I began to learn what treasures the city’s historic libraries are. Rarely seen by visitors to Paris—or even most Parisians—they offer superb architecture, fascinating histories and an unusual glimpse into the intellectual life of a city where reading is still revered.

While they may seem forbidding from the outside, many of them are open to anyone willing to follow their rather Byzantine rules for access. The Sainte-Geneviève, for example, near the Sorbonne, is both a university and a public library. To get into that splendid Salle de Lecture, you’ll need to stop at the Accueil desk, fill out a fiche d’information and bring it with your passport to a registration desk where you’ll get a laissez-passer good for one day; you can do this once in a calendar year.

The collection, which includes over a million volumes and some 4,000 manuscripts, many from the 12th-century Sainte-Geneviève Abbey that once stood nearby, is a bibliophile’s delight—its treasures include an illuminated Bible dating from 1185 and two richly-illustrated 15th-century copies of Saint Augustine’s City of God. But, like the other libraries on our historic route, it’s worth a visit for the architecture alone. The design was revolutionary in its day. When it was built in the 1840s, some 40 years before the Eiffel Tower, iron was just starting to be used as a structural material; it enabled architect Henri Labrouste to create the splendidly luminous space of the reading room by supporting the roof with slender columns rather than massive stone walls.

Labrouste’s success with the Sainte-Geneviève led to his appointment as architect for the country’s most prestigious library—the Bibliothèque Nationale de France (BNF), whose original collection dates back to the 15th century. France’s national library began as the Bibliothèque du Roi, Louis XI’s personal collection. It grew rapidly as it passed down through royal generations—a library was increasingly viewed as an important asset of a powerful monarch.

At first it was housed in the king’s palace, wherever that happened to be at any given time. But as it evolved from a private collection into a national resource open to scholars (if not yet to the general public), it moved to Paris. By about 1720 it occupied its present location, a much-reworked complex of buildings bounded by the rues de Richelieu, Vivienne, Colbert, and Petits-Champs.

By then the library was renowned throughout Europe. And if members of the royal family seldom used it (Louis XIV came just once in his lifetime), it was a well-known attraction for cultured visitors to Paris. Nationalized during the Revolution, it was enriched by confiscations from the estates of aristocratic émigrés and religious communities.

Today its collection numbers over 13 million books, 250,000 manuscripts and millions of prints, photos, maps, musical scores and more, reflecting the fact that, by law, at least one copy of everything published in France must be deposited with the BNF. By the mid-20th century it had outgrown its original location and is now spread between that site, called the Site Richelieu, and a new one, the Site François Mitterrand. Opened in 1996, the new library, on Paris’s eastern edge in the 13th arrondissement, is a vast, dismal and uninviting place, where books are stored in four glass towers and readers are sent underground.

Fortunately, the original Richelieu site still houses many special collections. For non-researchers, there are several ways to enter its hallowed premises. One is by paying a fee to view excellent temporary exhibits in the ornate Mazarine Gallery or the more austere Mansart Gallery. Another is by taking a guided tour—normally given the first Tuesday of the month by reservation (01.53.79.87.93, €6.86). Tours are currently suspended because of a restoration project, but anyone can stop in to see, if not enter, Labrouste’s beautiful 1868 reading room, with its nine lofty dome-skylights. The glass-roofed Oval Reading Room down the hall is also worth a look.

Across the river is one of the city’s loveliest, and oldest, libraries, the Bibliothèque Mazarine, founded in 1643 by Cardinal Mazarin, who served as France’s prime minister during Louis XIV’s minority. Housed in the stately, domed Institut de France facing the Pont des Arts, it specializes in French history. It’s worth signing up at the Inscriptions desk for a pass (good for two consecutive days, available once a year; bring your passport) just to see the elegant L-shaped reading room.

Smaller and more intimate than the Sainte-Geneviève or the BNF, the library has warm wooden paneling, superb gilt chandeliers, shelves lined with fringed chamois, and long ladders reaching up to the balcony that encircles the room. Bronze and marble busts line the walls, windows on one side look out across the Seine toward the Louvre, and a priceless case clock chimes the hours while researchers work at long leather-topped tables. Temporary exhibits highlight the collection’s more interesting volumes.

The Bibliothèque de l’Arsenal is located in a former military compound — you can still see stone cannons spouting fire and piles of cannonballs in the rooftop architectural details. By the mid-18th century it was home to the Marquis de Paulmy, a booklover who assembled a vast library of books, manuscripts, medals and maps, which he opened to scholars and literary figures of his day. The collection changed hands several times but even during the Revolution, when it was confiscated as the property of an émigré, it remained in its present location. Enriched by Revolutionary acquisitions, it became, and remains, a department of the BNF.

Opened to the public in 1797, it became famous for several live-in celebrity librarians. Among these men of letters the best known was writer Charles Nodier, whose literary salon in the 1820s and 30s was attended by the Romantics, including Victor Hugo and Alfred de Musset. Cuban-born French poet José-Maria de Heredia, the library’s director from 1901 to 1905, hosted a salon frequented by the Symbolists and Parnassian poets. Today the library’s principal strengths are French literature and the performing arts, but it also holds medieval manuscripts and pre-19th-century maps.

An interesting 19th-century library, the Bibliothèque Forney, is housed in one of the city’s rare remaining examples of medieval civil architecture, the Hôtel de Sens, built between 1475 and 1507. The library was created by businessman Aimé-Samuel Forney to promote artistic craftsmanship among the city’s workers. The childless philanthropist left the city a legacy that funded a new type of institution: a professional library that Parisian workers could use to perfect their skills. Inaugurated in 1886, it was originally located in the cabinet-makers’ neighborhood of the Faubourg Saint-Antoine in the 11th arrondissement. The Forney was the first library in the city to stay open late, so its clientele could get to it after work hours. It eventually attracted art history students, architects and fashion designers, and its collection developed accordingly. It now includes decorative, graphic and fine arts as well as collections of wallpapers, textiles, posters and advertisements.

In 1961 the Forney collection was moved to the Hôtel de Sens in the Marais and, as a city library, remains open to all. Unlike these other historic libraries, the Forney allows registered users to borrow books. But no registration is needed to visit, and it’s a wonderful way to get inside an early 16th-century building. The reading room is divided from the stacks by a triple-arched screen of open stone lacework, and to get to the poster collection, you climb a winding stone stairway inside a turret.

In all these establishments, my librarian’s eye noted details like classification systems and shelving arrangements that differed from the American model. But happily, one professional trait seems universal: all the librarians I spoke with were enthusiastic, eager to help and proud of their libraries. When I mentioned to the librarian who registered me at the Mazarine that I was thrilled to have access to such a marvelous library, she glanced around the beautiful, chandelier-lit room with its wealth of leather-bound books and smiled. “Moi aussi“, she said.

Originally published in the October 2009 edition of France Today.