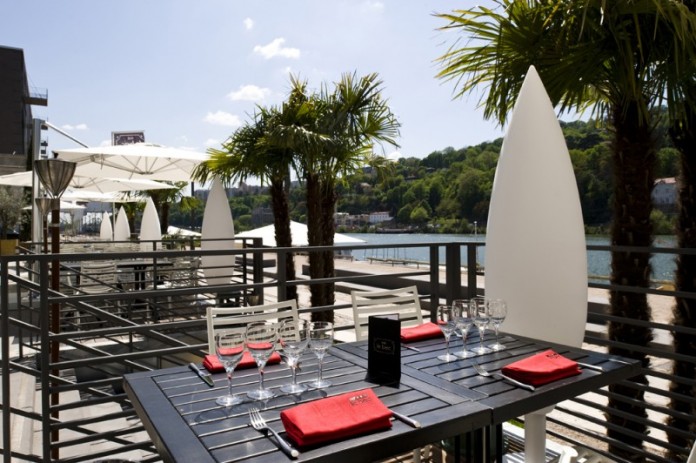 When it’s completed, Lyon’s Confluence project will double the size of the historic center of France’s second city—a feat that would be well nigh impossible anywhere else, geographically or logistically. This month the project’s emblematic showpiece, the Place Nautique—a massive public-square-cum-pleasure-harbor—will be officially opened to the public, in an area that just a few years ago was little more than neglected wasteland.

How has Lyon been able to grow in this fashion? And where did developers find 370 acres of prime real estate available right in the middle of a major metropolis?

Since its Gallo-Roman infancy, Lyon has grown up along the banks of the Rhône and Saône, with its modern center city on a peninsula, the Presqu’île, sandwiched between the two rivers, framed by hills to the north and west.

The confluence of the rivers, where the Saône flows into the Rhône at the southern tip of the Presqu’île, is a compelling sight, and has added to Lyon’s allure for centuries. But while building began in the wide center of the peninsula in the 16th century, the triangle at its tip remained waterlogged for another 200 years. Eventually, construction techniques allowed city developers to shore up the riverbanks and the tip became viable for building, evolving into an industrial zone.

A huge gasworks and the terminal for the train line from Saint-Etienne to Lyon—the first in France—were built in the 19th century. The city’s two prisons were installed, as were the slaughterhouses, and prostitution moved in, too. Lyon’s wholesale market, once the biggest in France, was established, with more than 300 trucks coming and going each day laden with fruit, vegetables, meat, poultry and flowers. The banks of the Saône and the tip of the Confluence were owned by the Port de Lyon-Port Rambaud, which was built in 1926. Its activities ceased in 1995 when it was replaced by the Port de Lyon-Edouard Herriot (PLEH) on the Rhône.

It took until 1998 for talks to begin on redefining the district. The Confluence, it was decided, would no longer be Lyon’s industrial quarter and a dumping ground for some of the city’s less salubrious activities. It would become a quarter where people lived and worked in attractive, thoughtfully designed apartments and offices, a vibrant area that made the most of its amazing natural location between two rivers—no part of the Confluence district is much more than 400 yards from the water. With hindsight, it seems a wonder it took so long for city planners to recognize the value of their potentially golden triangle.

The Confluence project—the biggest such urban development undertaking in France, and arguably one of the biggest in Europe—is organized in two phases. Work began on the €1.16 billion Phase 1 in 2003, and two of its most important elements will be inaugurated in June 2010.

The most eye-catching is the Place Nautique, an immense square that will be the biggest public space in the area. Half of its ten acres are taken up with a huge inner harbor, fed directly by the Saône. A bridge along the banks of the river opens to allow pleasure boats to pass into the Place. Tiered paths, trees, cafés and restaurants will eventually surround the basin, and an elegant passerelle, a wood and metal footbridge, will span it. The three-day official opening, at the end of June, will be celebrated with music and dancing at open-air guinguettes.

The second major project opening this month is the Parc de la Saône. A busy road, the Quai Rambaud, used to run alongside the river, with traffic noise and pollution ruining the propects of a riverside walk. Now the road has been diverted away from the riverside, and in its place is a 35-acre park designed by landscape architect Michel Desvigne, with wide paths for cyclists and smaller paved walking paths along with gardens and planted ponds intended to attract birds and other small wildlife.

A stroll southward down to the Saône leads visitors to the old port area, where a handful of houseboats are anchored on the riverbank, and the customs buildings and former warehouses are being renovated. The old sugar warehouse, La Sucrière, is already in use as an exhibition space—part of the city’s renowned Biennale of Contemporary Art is usually held there. And, installed in an old salt warehouse, the vast contemporary covered market and restaurant Rue Le Bec, run by the two-star chef Nicolas Le Bec, is already drawing trendy crowds into the unfinished area.

There’s some exciting new architecture in this sector of the Confluence, too, including the striking Pavillon des Salins by the Paris-based architects Jakob+MacFarlane. A chunky block enrobed in orange metallic mesh with circular cutouts, it looks like an enormous piece of cheese strategically nibbled by mice. Confluence Phase 1 also includes some extremely swanky apartment buildings that border the Saône and the Place Nautique. Benoît Bardet, head of communications for the project, says that when apartments went on sale in June 2006 they were priced at €4,500 a square meter (11 square feet), making them Lyon’s most expensive real estate ever. But they were quickly snapped up and the first occupants moved in last October.

The buildings are all individually designed, one in glass panes of varying greens, another dazzling silver, another in tones of copper, all built to high energy-efficiency standards. Broad staircases run between them, linking the apartments to squares, a large inner garden, the aquatic gardens of Saône Park and the Place Nautique. With the river itself just a few yards away and the green hills of west Lyon rising up on the far bank, it’s easy to see why prices are high. But some 20 percent of the new apartments are either rented out at low-income assisted-housing rates or can be bought at reduced prices through an assisted home purchase program.

Still to come is another pivotal part of Phase 1, a leisure complex that will include movie theaters, restaurants, shops and even a climbing wall for aspiring mountaineers, all slated to open in 2011.

Meanwhile, Phase 2 has just begun, overseen by landscaper Desvigne and Swiss architects Herzog and de Meuron, who are best known for converting a power station on London’s River Thames into the award-winning Tate Modern museum, and for the Dominus Winery in Yountville, California.

Phase 2 will concentrate on the Rhône side of the Confluence and the peninsula’s tip. The final piece of the puzzle began to fall into place late last year when the wholesale market and the prisons were relocated to the outskirts of town. Many of the existing market buildings will be kept and renovated, to give the area a distinct look and identity and to provide affordable rental spaces for workshops and other small businesses. This new area—the Market Quarter—is planned as a mix of homes, shops and offices in a network of streets and courtyards.

The area at the very tip end of the Confluence is known as The Field. Designers hope to make it the green counterpart to the urban Market Quarter. The few buildings there will be given over to cultural activities or research and higher education services. Most of the area will be grassy, with streams winding through, recalling the original marshland. Eventually it will be possible to walk for miles—south from the central city along the Saône, around the tip of the Confluence and back up the banks of the Rhône.

Such an immense development demands improved public transport. The existing tramline is being extended to the east, where it will link up with the Métro. New bridges are being built, in particular two new footbridges that will link the far sides of the Rhône and Saône via the Confluence, a passageway called the Transverse. A multistory parking garage is also underway, with space for more than 1,000 cars, but basically cars will be discouraged in the Confluence. “The Lyonnais, like the French in general, are obsessed with their cars,” says Bardet, grimacing. “We have to change that.”

One of the last major elements still to come is the new Musée des Confluences, a science and ethnographic museum at the tip of the Presqu’île designed by the Austrian cooperative architectural firm Coop Himmelb(l)au. Beset with technical and financial difficulties, its construction has been halted and the eventual opening date is still undetermined.

The entire development project is scheduled for completion by 2020, however. By then, if all goes well, thousands of new residents will have moved in, and Lyon will have fully reclaimed its grand geographical centerpiece.