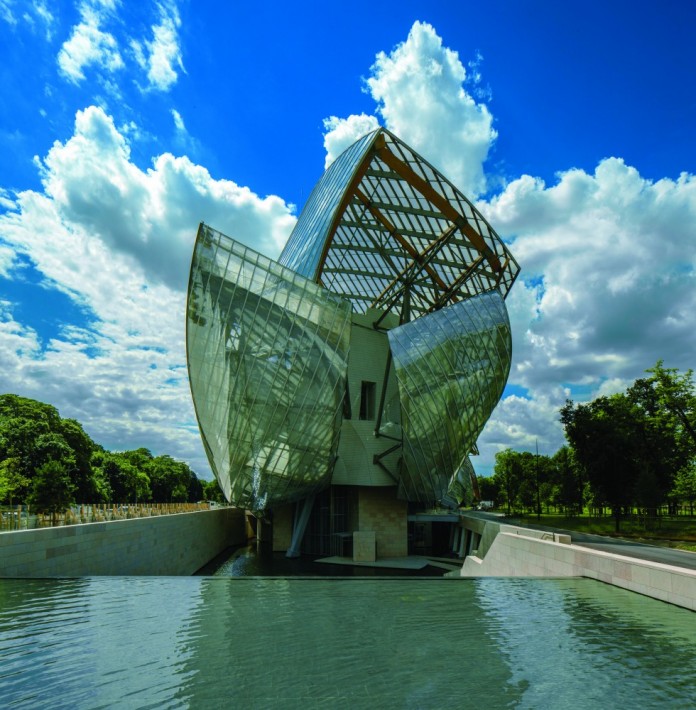 With luxury luggage at the heart of Louis Vuitton’s trade, it’s logical to expect a brand such as this to consider any ‘container’ to be at least as equally relevant as its ‘contents’. It therefore follows that when Bernard Arnault, the CEO of LVMH Moët Hennessy, sought out Frank Gehry to design this private art space in Paris, he asked the architect to effectively create an haute couture building, with a form as accomplished in its ambition as the invaluable works of art within.

The objective was to create a welcoming structure which would integrate with the family-oriented use of the Bois de Boulogne’s Jardin d’Acclimatation, in the tradition of 19th-century glass garden pavilions. The building should serve as both a contemporary art museum and cultural centre, focusing on all manifestations of artistic creation.

Gehry’s structure has a sense of transience, like a chrysalis nestled in a cleft – between private and public, form and function, art and trade. Situated on the edge of a water garden, the building is composed of white blocks or “icebergs” clad in fibre-reinforced concrete, surrounded by 12 expansive glass “sails”, which provide a sense of motion, as they reflect the water below, the woods around it and the clouds above.

The ground-level hall serves as the entry to both the museum and the Jardin, and visitors climb exterior stairways underneath the glass sails to  reach rooftop gardens. Gehry designed the building, which opened on October 27, as an active social space, and it’s scheduled to hold two temporary exhibitions per year, in addition to concerts in a 350-seat auditorium. The building also features Le Frank, a restaurant led by Michelin-starred chef Jean-Louis Nomicos, and a bookstore.

The museum displays a permanent collection composed of pieces from the Fondation Louis Vuitton and some from Bernard Arnault, a passionate contemporary art collector. Although LVMH is publicly traded, it’s a family affair and Arnault ranks as one of the world’s richest people, with a net worth quoted by Forbes as above the $29 billion mark.

Although the Fondation only has a 55-year lease for the Bois de Boulogne site, the landmark building is effectively a gift to the city of Paris. Arnault told French television reporters that it’s “a small payback to the public, and to our employees”.

The building’s initial exhibition, which will run until March 16, 2015, offers “an immersion into the creative world of Frank Gehry”. The first major European retrospective of Gehry’s career is running concurrently at Le Centre Pompidou.