When life gives you lemons… Throw a party!

If you’ve had enough of winter and are overdue for some zesty entertainment, it’s time to head to Menton on the French Riviera, where you can spend 19 days drinking up the sunshine at La Fête du Citron, which offers parades, music, street performances, local food and stunning views of the panoramic coastline. What better way to break out of hibernation?

The most easterly town on the Côte d’Azur, Menton’s nicknamed the ‘pearl of France’ and, thanks to its temperate subtropical microclimate, boasts many lush gardens. Systematic citrus cultivation there dates back to the 15th century, but it became truly intensive 200 years later. In 1928, an hotelier had the idea to hold a big party to attract visitors, highlighting Menton’s produce. The response was so overwhelming that the party spilled on to the streets and it’s now one of the Riviera’s most important annual events, alongside the Nice Carnival and the Cannes Film Festival.

For almost three weeks, the Jardins Biovès and Menton’s streets are thronged with giant citrus sculptures, and there’s daily and nightly processions of wonderfully decorated floats, a garden of lights, and an eclectic market which showcases local culture and gastronomy. 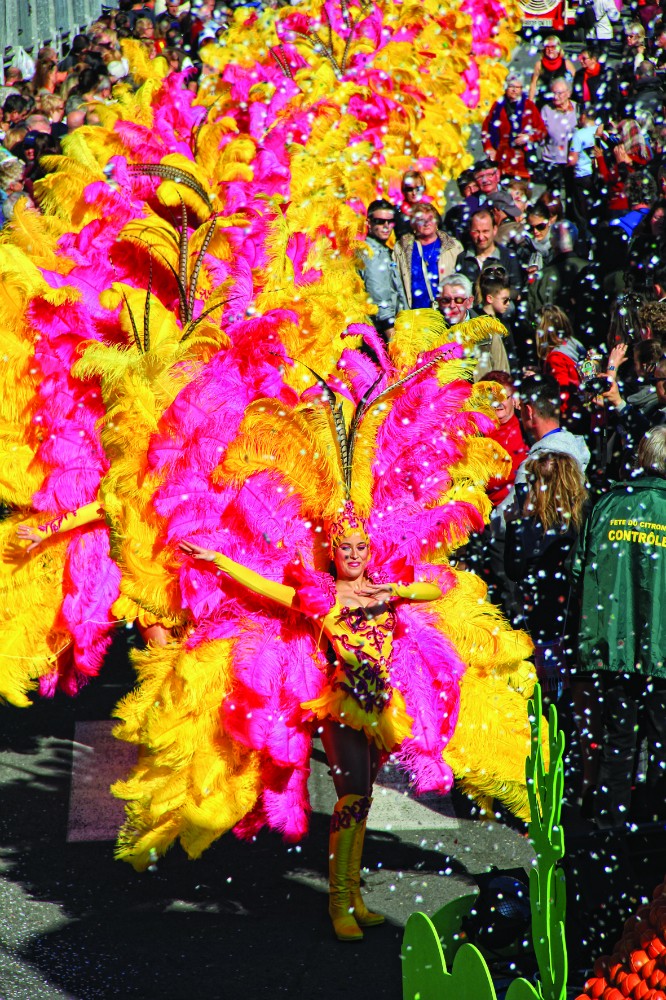 The themes have changed over the years. The 2013 edition of the festival was inspired by Jules Verne’s Around the World in 80 Days, and in 2014 it was 20,000 Leagues Under the Sea. In 2015, it revolved around The Tribulations of a Lemon in China, a play upon Verne’s novel Tribulations of a Chinaman in China. The hero of the novel was a rich Chinese man who was so bored with his life that he decided to end it. However, instead of suicide, he opted to experience a final thrill and hired a hit man to complete the task. After a fantastic series of misadventures and almost fatal moments, Verne’s hero finally realises how valuable life is.

In 2018, a Bollywood-themed Fête du Citron featured a jumbo replica of the Taj Mahal made of citrus fruit. And in 2019, the theme was “fantastical worlds”. The 87th edition in 2020 is about Les Fêtes du Monde.

This vibrant jamboree continues to attract revellers of every age and nationality.

The Fête du Citron in Numbers

20,000 hours are worked by the team which puts together the event