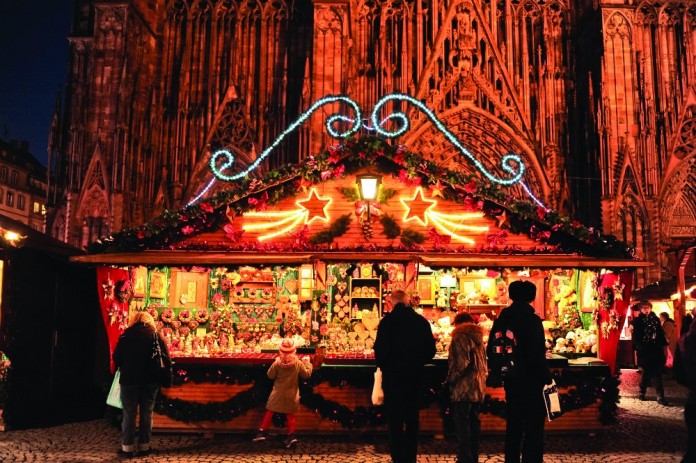 Christmas is a magical season in France. Every town in the country shimmers under the glow of a thousand fairy lights, the warming scent of vin chaud and roasting chestnuts fills each street, and the peaceful resonance of Christmas carols imbues each heart with a warm dose of festive cheer. France’s Christmas markets are unmissable, dating back centuries and creating a wonderful antidote to the onset of the winter’s chill.

The cities of Strasbourg, Colmar and Lille are amongst the most impressive. If Christmas is all about good food and mulled wine, snow-topped market stalls and winter wonderlands, then these three markets are a must-visit during the festive season.

There’s traditional, and then there’s traditional Strasbourg, home to the oldest Christmas market in France: the famous Christkindelsmärik, which first took place in 1570. Its name derives from Christkind, meaning ‘Christ child’, and refers to a fairy-like girl who, traditionally, was said to deliver presents to Alsacien children on Christmas Eve, before today’s secularised version of Saint Nicholas began to take over during the 19th century.

An old myth once existed in Alsace, that children should bring gifts to the baby Jesus, and the Christkind is said to have emerged from this idea – hence the beginnings of what is now one of the largest Christmas markets in Europe, and certainly the most significant in France, welcoming some two million visitors per year.

A traditional farmers’ market is set up in Petite-France, an area on the Grand Île famed for its medieval half-timbered houses and surrounding canals. Just a 10-minute walk away is Place Kléber, where a bredele biscuit and cake market is held, selling batches of these traditional Alsacien baked treats, which are often flavoured with aniseed, orange or cinnamon.

An enormous, 30 metre-high Christmas tree is installed in the centre of the square. This resumes a tradition that has endured here since medieval times – a manuscript dating back to 1605 was found describing fir trees adorned with decorations during advent. At the base of the tree is the ‘Village of Sharing’, where humanitarian organisations collect donations for various charitable causes under the tree’s twinkling glow.

Back in Place Broglie, standing at the foot of Strasbourg’s Cathédrale de Notre-Dame, the first thing that stands out about Christkindelsmärik is its heady perfume. Mulled wine spices the air with cinnamon and cloves, and sweet crêpes and gouffres sizzle on hot black slabs which steam in the crisp winter air, the aromas of butter and sugar mingling with the earthy scent of evergreen sapins.

Keep your eyes peeled for traditional products, including glass paintings, music boxes, embroidered table linen and pottery. Stands laden with jars of foie gras (first created in Strasbourg) and stacks of sugar-glazed bredeles tempt passers-by, and angelic music soars from the wooden cathedral doors, which open onto concerts and plays put on throughout the season.

For a sense of the market’s enormity, climb the cathedral’s tower – at 142 metres high it’s the world’s sixth tallest cathedral, and it was Strabourg’s loftiest building until 1874. After hauling yourself up the last remaining steps, you emerge into the bitingly fresh air, and are dazzled by a carpet of gold-glowing chalet stalls stretching as far as the eye can see, linked by streams of shimmering lights and perhaps – if you’re lucky – they are blanketed in gleaming white snow.

Alsace’s other most chocolate-box-perfect city, Colmar, decks itself out in thousands of lights and festive ornaments for the Christmas season. It has five annual Christmas markets, all dotted around the old town, which is decorated with holly and fir trees adorned with candles during Advent – traditionally, to protect against evil.

As hundreds of chalets pack the cobbled squares of Colmar’s historic centre, the whole quartier virtually transforms into one extensive Christmas market, to the backdrop of half-timbered, charmingly painted medieval houses. In the former fishmongers’ and butchers’ area, Petite-Venise, a children’s Christmas market is set up in between its weaving canals. Each of its 44 stalls is crammed full of stuffed teddies, wooden toys and tasty gingerbread, and a wooden horse merry-go-round and animated nativity scene are put up especially for the occasion. On the central Place des Six-Montagnes-Noires, a giant yellow post box appears each year, where children can send their letters to Père Noël.

The market in the Place des Dominicains, which is presided over by the 14th-century Dominican church, is a more spiritual affair. Made up of 65 stalls nestled together, the lights that surround the church’s stained glass windows create the market’s peaceful atmosphere and illuminate their stunning design after nightfall.

For a local foodie experience in true Alsatian style, the market held at the Place Jeanne d’Arc must be your first port of call. Instead of traditional wooden chalets, the market stalls are housed in a reconstructed Alsacien village – complete with farm animals, half-timbered houses and a church. Local produce is piled high for all to admire: foie gras, bredeles, wine, Alsacien brioche, pain d’épices and brandy. Festive songs resound in the square and flowery garlands decorate the huts.

At the Place de l’Ancienne Douane, a 42-stall Christmas market surrounds its 19th-century fountain, which is topped with a statue by Bartholdi, the famous French sculptor who famously designed the Statue of Liberty. The sculpture depicts Lazare de Schwendi, the general who introduced the Tokay wine grape variety to Alsace in the 16th century – to the region’s long-lasting celebration!

Colmar’s fifth marché de noël is its only covered one, and takes place adjacent to the Place de l’Ancienne Douane, at the 16th-century Old Customs House. Within its glazed-tiled walls, the Koïfhus covered market specialises in antiques and rare art objects, with regional traders enthusiastically displaying their wares. You can expect to meet furniture-crafters, wood-sculptors, hatters, art jewellers, second-hand booksellers and antique dealers there.

If it’s possible to tire of shopping in the Christmas markets, an ice-rink is set up in the Place Rapp, in the midst of a winter wonderland of snow-capped fir trees and chalets, and a variety of events are put on throughout the festive season to amuse and enchant. Nightly guided ‘Magic of Christmas’ tours lead enraptured visitors through the beautifully lit old town, and children’s choirs sing carols on brightly lit boats that slink along the canals of Petite-Venise.

Conveniently connected by the Eurostar to London, Paris and Brussels, Lille embraces the Christmas spirit more than any other city in Northern France. Its Christmas market, the largest in the north, is created in the form of a snow-covered village complete with a frozen lake for ice-skating.

Place Rihour is at the epicentre of the festivities, with its 60 foot-high Christmas tree dwarfing some 83 chalets laden with Christmas gifts, foods, nativity figurines and decorations for sale. Of course, you can’t walk more than a few paces without being tempted by a stack of waffles– no visit to a Lillois market would be complete without a warming belly-full of gouffres. If you need something savoury, spread a chunk of pungent Maroilles cheese on a crusty baguette to refuel, perhaps with some local pâté. Treat yourself to a colourful macaron or babelutte (honey-flavoured caramel) for dessert.

Each year, an enormous ferris wheel is erected in the Grand Place, which at 50 metres-high offers the most sweeping views of Lille you can get year-round – and a birds-eye panorama of the winter wonderland below, with its market stalls, fairy-lit trees and frequent appearances from Père Noël. This is one of Lille’s most beautiful squares, lined with some of its finest architecture. From on high, the Flemish-Renaissance houses that make up the 17th-century Vieille Bourse can be seen anew.

If you find yourself in Lille on the last Saturday before Christmas, head to the Place du Théâtre to watch a unique spectacle that takes place there each year. A dressed-up Father Christmas climbs the Chamber of Commerce’s 262 foot-high bell tower and dramatically falls from the top, before handing out sweets to the children gathered below and posing for photographs.

The Christmas spirit spreads far and wide throughout the city, with jazz concerts, pony rides and ice sculpture exhibitions filling the gaps between the market squares. The shopping district in Lille’s old town is hard to beat for Christmas gifts, and the authenticity of its centuries-old market replaces any notions of a commercial Christmas with one of traditional mulled wine and street snacks, tasteful carols and the sparkle of lights as far as the eye can see.