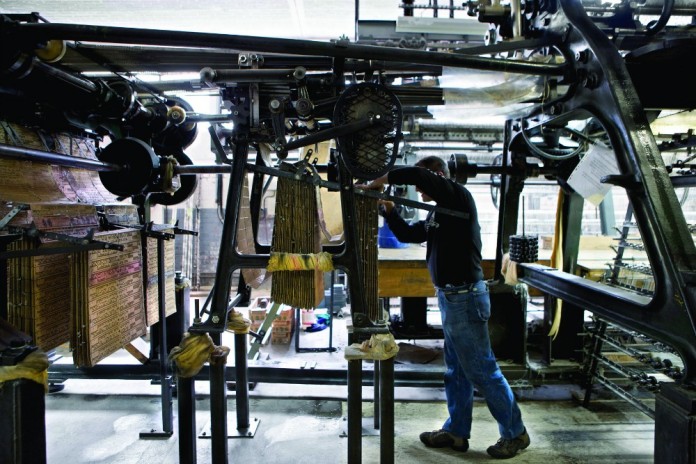 The world held its breath as Kate Middleton stepped from the royal Rolls Royce on her wedding day, ending months of anticipation as to what this major trendsetter and probable future queen would be wearing. But in a small village tucked away in a corner of northern France, the anticipation took on a whole new meaning.

“We were watching like everyone else and when we saw the lace a cheer went up through the factory,” says Maud Lescroart, marketing director for Sophie Hallette, a family-owned lacemaking company based in Caudry for over 125 years. Although Kate’s dress was designed by Sarah Burton for Alexander McQueen, a loyal client, secrecy was such that even the principles of the firm had no idea their lace would be the centrepiece of the royal wedding day. “We didn’t even know if she would wear lace,” says Lescroart. “Of course, it took a couple of hours to be 100 per cent sure it was ours, but we sensed it was immediately.”

Sophie Hallette is one of the oldest and most prominent of the eight Caudry lacemakers still working on the traditional Leavers looms that were smuggled here from Nottingham, England, piece-by-piece in the early 19th century. Still being tweaked to accommodate changing times and trends, these magnificent looms replicate, almost to perfection, the delicate handmade lace that was once among France’s most prized and expensive commodities.

A major event for the company, to be sure, but for the owners of Sophie Hallette, the credit goes to the loom operators, designers, dyers and other skilled artisans, many in their fourth or fifth generation with the company.

“Most of all we were proud and happy to have the recognition of these talented people who put so much into creating the lace,” says Lescroart. “It is one of France’s metiers d’art, and they are the skilled hands that make it possible. Kate is only the most recent force to rock the ever-shifting ground of lacemaking. The whims of fashion and vagaries of politics have always dictated the fluctuating fortunes of France’s lacemakers.”

Although the mention of lace dates back to Homer, it didn’t emerge in Europe as a fashion staple until the end of the 15th century. In France, lace came into style in the mid-16th century, thanks to Paris’s first great trendsetter, Catherine de Medici, the Queen of France from 1547-1559. Lacemaking originated in Venice and in Flanders, although they were initially of two different styles: Italian needle (point de Venise) and Flanders bobbin.

France was a latecomer to the increasingly lucrative business. Until the reign of King Louis XIV, lacemaking was limited to small, independent cottage industries strewn about the countryside. In his constant search for ways to replenish the spendthrift King’s coffers, Louis’s finance minister, Jean-Baptiste Colbert, aware that nobles, both male and female, were spending small fortunes to decorate any and every item of apparel, from waistcoats and dresses to sleeves, collars, boot tops, shawls, parasols and fans. Colbert realised that this was an excellent source of revenue and a stopgap for the torrent of lace-destined francs flowing out of France.

Colbert lost no time attracting investors and luring Venetian lacemaking talent to Alençon, Normandy, a natural capital for his project, since the town already had a flourishing cottage industry that employed hundreds of lacemakers in villages and convents. At first reluctant to give up their traditional methods and patterns, the ladies were finally persuaded to produce the new ‘point de France’ needle lace. The venture was quickly profitable, despite the King’s own sumptuary laws regulating who was entitled to sport lace and how they could wear it – in the finest French tradition, these rules were totally ignored.

In deference to Louis, point de France became all the rage at court. Even more so with the advent of a new lace-based hairstyle credited to the King’s latest mistress, Marie Angélique de Scorailles, the beautiful 18-year-old Duchesse de Fontanges who, having lost her hair ribbons in the exertions of the hunt, hastily tied up her tumbling tresses in a lace handkerchief.

Charmed by this impromptu hairstyle, Louis ordered her to keep the coiffure at court that night. By the next day,  everyone was wearing the new ‘fontanges’. Simplicity was never à la mode at Versailles and so the fashion grew ever higher, to the point of absurdity, employing many feet of lace in an elaborate tower that could reach beyond two-feet tall. In his memoirs, Louis de Rouvroy, Duc de Saint-Simon, quipped that the “structure of brass wire, lace, hair and baubles of all kinds… made a woman’s face look as if it were in the middle of her body”.

As the portraits of the 17th and 18th centuries attest, up until the time of the Revolution, the appetite for ever more extravagant and wildly expensive lace only grew. Along with articles of dress, lace figured in sheets, pillow edgings and bed curtains, on the layettes of newborns, dolls sent abroad to illustrate the latest Paris trends and in fashionable trousseaux. In 1739, when ‘Madame’, the eldest daughter of Louis XV, married the Prince of Spain, the bill for her lace-trimmed linen alone came to more than 33,000 gold Francs (£25,000). Considering the hours and labour that went into each foot of lace, this wasn’t outrageous – a single flounce for a dress could take 36 women 18 months to complete.

In the 17th century, important lacemaking centres arose all around France, including Aurillac and Le Puy in the centre, Argentan and Alençon in Normandy, Valenciennes in the north, and Chantilly, close to Paris. The Duchess of Longueville founded an important centre at her château in Chantilly and established schools for the trade that grew to encompass more than 100 villages. By the 18th century, lace was so integral to fashionable costumes that a complicated etiquette arose around its wear – never in morning, certain colours only at certain times of day and specific styles and weights of lace for each season.

All this ground to a halt in 1793. Some histories credit Marie-Antoinette’s adoption of a simpler lace to harmonise with the new lightweight Indian muslins – which were no doubt a relief, since a gown of the time, encumbered with heavy brocades and silks, jewels, precious metals and layers of lace, could weigh more than 15 pounds – for the demise of the most exquisite hand-made laces. But whether the Queen’s less elaborate lace was actually a factor, the loss of her head certainly was. Even the lacemakers of Chantilly died on the scaffold, along with their aristocratic patrons.

Around the time of the Napoleonic Wars, changes in fashion and the advent of lacemaking machines altered the industry irrevocably. Although simple machines for lacemaking had existed from the late 18th century onward, it wasn’t until the invention of the Leavers loom, in Nottingham, England during the early 1800s, that a machine could mimic the hands of the lacemaker working her tulle ground. With the addition of the Jacquard system  which created designs via perforated cards, like those of a street organ, machine-made lace really took off. On their way from Calais – where they first landed, after being smuggled out of England during the unrest of the Industrial Revolution – to the lacemaking capital of Valenciennes, the Leavers looms made it as far as Caudry.

Through constant innovation, the lace produced on Leavers looms rose to such a high level of beauty and perfection that the differences between handmade and the finest quality machine-made lace could confound even the experts. By the mid-20th century, handmade lace was once again reduced to the status of a cottage industry.

From the Past into the Future

Already a centre for linen weavers, Caudry was a natural destination for the Leavers looms, and by the mid-1800s there were more than a hundred companies making lace there. In 1887, Eugène Hallette established his family business here with six Leavers looms, all of which are still in use today.

In 1942, Etienne Lescroart purchased the company from the Hallette heirs. Now in it’s third generation under the Lescroarts, Sophie Hallette’s knack for innovation, exceptional quality and longstanding client relationships  has propelled the company to the forefront of lacemaking. However, as Maud Lescroart is quick to point out, Hallette’s absolute belief in the workers and reliance on their expertise is the heart and soul of the business. Between threading, weaving and dying, the lacemaking process takes 23 skilled craftspeople. Machine made, yes, but the human touch is integral to the process, from calibrating the machine to mending flaws in the intricate lace.

“A lacemaker uses all of their senses – eyes, ears, hands– their whole body is involved in the job. It’s like the machine is part of them, that’s why they’re trained for seven years,” says Lescroart. “I always feel that the lace is beautiful because of the tiny flaws, which are the trace of the human hand. There is a soul, it vibrates, it is alive.”

The world’s top couturiers agree. Alexander McQueen is only one among scores of fashion houses that favour Sophie Hallette lace. The tantalisingly transparent styles featured in Valentino’s lauded Fall-Winter 2014 collection were signature Hallette, and you’ll see the lace in ready-to-wear, couture and lingerie collections from the likes of Louis Vuitton, Lanvin, Marc Jacobs, Stella McCartney, Versace and Dior.

Innovation at Hallette is in the process and the product. Of the 40 new patterns created each year, many are based on the company’s extensive archives of 2,000 patterns, half of which feature embellishments like feathers, leather, surprinting, semi-precious stones or Swarovski crystals. Many patterns are customised for a client’s special needs.

Like an earlier version of the Kate Middleton story, in 1962 American royalty Jacqueline Kennedy appeared on the cover of Look magazine, wearing a black lace mantilla by Sophie Hallette. This instantly created a new fashion craze and put the French lacemakers on the American radar, which offers more proof that this fabric of utmost sophistication, taste and craft may wax and wane, but it will never go out of style. 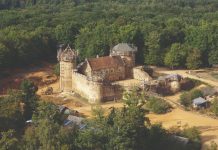