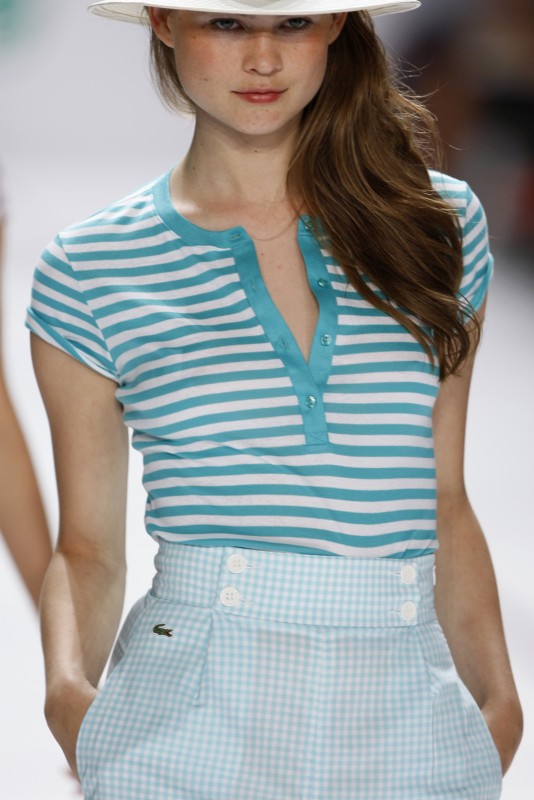 In 1927 tennis champion René Lacoste won both the French and American Opens, as well as the Davis Cup as one of the famed Four Musketeers (with Jean Borota, Jacques Brugnon and Henri Cochet). Lacoste revolutionized tennis attire when he played wearing a lightweight, short sleeved, cotton knit polo shirt of his own design—an inspired alternative to the long-sleeved, starched white shirt that was de rigueur at the time. The same year, because of Lacoste’s bet with another player over an alligator suitcase, the American press dubbed Lacoste “the alligator,” a nickname that also evoked his tenacious playing style. An embroidered alligator soon appeared on the pocket of his white blazer, and the legendary symbol was born.

In 1933, Lacoste started his own company, manufacturing a slightly different version of his cool shirt—a white short-sleeved, petit piqué cotton model code-named the 1212. Emblazoned with the alligator logo, it was probably the first article of clothing to flaunt its brand on the outside. Lacoste shirts blossomed into color in the early ’50s and went on to classic fame. A disastrous licensing agreement with Izod in the United States almost brought the alligator to extinction, but Lacoste regained control in 1992, and the 1212 is back on top in a spectrum of shades from black and navy to coral and hot pink, with a new women’s version in a form-fitting stretch fabric. Innovation has always been a hallmark: René Lacoste also invented the first steel tennis racket in 1963. Today, fashion designer Christopher Lemaire’s updated Lacoste ready-to-wear draws plaudits from fashion critics, interior designer Christophe Pillet has done the brand’s new concept boutiques and Lacoste has become a lifestyle icon in 110 countries worldwide. Time to smile, crocodile.

Originally published in the December 2007 issue of France Today