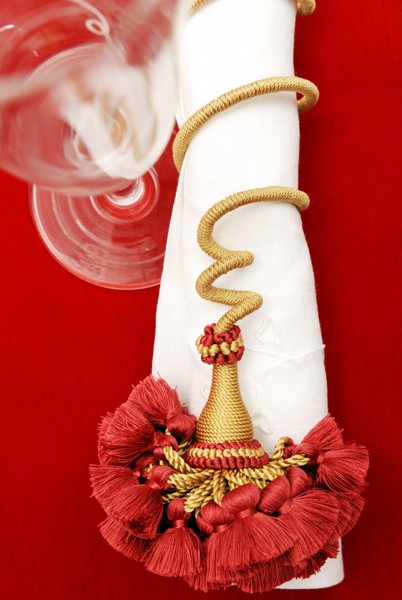 When the Château de Versailles restored its royal theater to 18th-century splendor, it called on a remarkable sixth-generation family enterprise, Declercq Passementiers, to recreate the golden tassels, braids and trimmings that were originally part of the stage decor. Declercq’s artisans spent more than 500 hours—and used 66 pounds of gold, among other materials—to create the ornate embellishments for the jewel box theater that was inaugurated in honor of Louis XVI’s marriage to Marie Antoinette.

Founded in Paris in 1852 by the great-great-grandfather of current president Claude Declercq, the company flourished, acquiring prestigious passementiers—and their stocks of centuries-old trimmings. Treasures of the Declercq archives now include passementerie from the era of Louis XIV, making it a primary source for the restoration of French monuments including the châteaux of Fontainebleau and Compiègne and Paris’s Opéra Garnier.

Declercq also supplies contemporary decorators and designers, and the general public, with trimmings from its current collections. Fashioned from silk, wool or cotton, Declercq’s luxurious tassels, braids, fringes, pompoms and tiebacks sometimes also incorporate crystals or beads. One contemporary tieback, Papillon, is graced by a delicate butterfly that seems to have just alighted on the window frame. About 80 percent of the work is done completely by hand, and some looms date from the late 19th century. The Declercq showroom, open to the public, is also a mini-museum displaying historic work, and on the first Thursday of every month, Declercq artisans offer demonstrations on workbenches and looms (call to reserve). And the tradition continues: Claude’s daughter Elisa Declercq joined the firm in 1990 and now manages manufacturing.