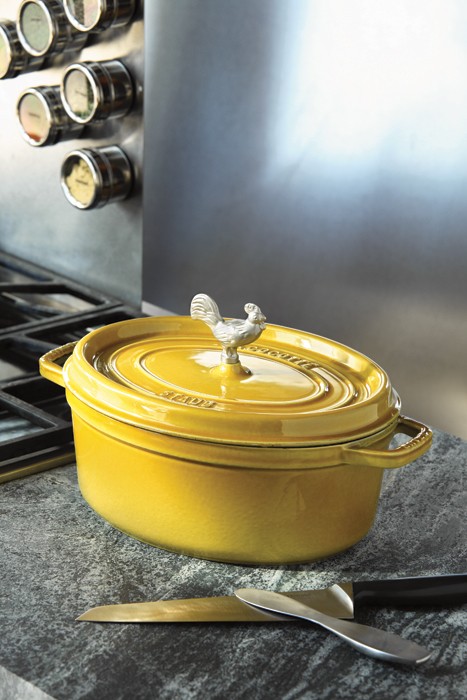 A Best of France selection.

When Francis Staub took over the family business, a cookware store in Alsace founded by his grandfather, he decided to take it one step further. Buying a nearby cast iron plant in 1974, he began tinkering with his own designs, and soon launched the innovative Staub covered pot made of enameled cast iron with a matte black interior and a revolutionary lid. The lid’s underside is lined with tiny picots, or beads, that allow steam to condense and drip back down, effectively basting the food during the whole cooking process. Encouraged by the success of his self-basting casserole, Staub went on to design a whole line of cocottes and other cookware items whose signature matte black interiors are offset by bright exterior hues including sunshine yellow, royal blue and crimson. There’s a sense of fun in their design as well: mussels pots are shaped like giant mussels, the knob on the coq au vin cocotte is a rooster, and a fish crowns the bouillabaisse pot. And adorable mini-cocottes, just right for single servings, come in round and oval models in several colors including pimento red.

Shop for Staub at Williams-Sonoma

Originally published in the December 2008 issue of France Today; updated in December 2010