Steeped in history, perched on a rocky limestone hillside at the crossroads of Bordeaux, Saintonge and Périgord, Saint Emilion, in the Gironde department of south-west France, is a terroir of exception, producing a variety of the most sought after wines in the world.

In December 1999, the vineyards and eight villages in the jurisdiction of Saint-Emilion were inscribed on the World Heritage List by UNESCO, as a “cultural landscape.”

At Château La Grace Dieu des Prieurs (“Preserved by the Grace of God’s Priors”) it’s not only the grape varieties of the Saint-Emilion wine (80% Merlot – 20% Cabernet Franc) that blend – today it’s also the vision of philanthropist Andrey Filatov and the Art Russe Foundation, affiliating the splendour of Russian art with the excellence of French grand cru wine.

Born in the Ukraine in 1971, Filatov dreamed of fusing two of his passions in a single project (for your information the third is his family, and the fourth is chess – meet the President of the Russian Chess Foundation).

The large-scale reconstruction project, commenced in 2014, was sensitive to the fact that the history of the vineyard and château be carefully preserved while introducing modernity in the form of state of the art technology and materials. The brief drew its strength from Filatov’s deep respect for French cultural and gastronomic traditions and Russian artistic heritage.

Each building is a work of art strategically positioned to recreate a neo-farmyard surrounded by vineyards – with their own functional purposes.

The Girondine mansion, The Vat, innovative cylindrical fermenting chamber with anamorphic image of Yuri Gargarin in zero gravity! The Cellar – the Belvedere and the Fortin, each a link in the process of creating and marketing excellent wine.

The architectural revival and unreserved personal involvement of each member of the estate’s professional team, headed by Château Director Laurent Prosperi with winemaker and leading Merlot specialist Louis Mitjavile, and Technical Manager, Vine and Wine, Pedro Ruiz, resulted in the production of the 2014 vintage, the first in the Art Russe Grand Cru Collection.

“Building on the centuries old achievements of previous owners and focusing on making the most of the vine, the project gave way to the rebirth of a quality wine,” said Andrey Filatov in early July, when the tout Saint-Emilion gathered at the château to celebrate the magnificent transformations.

In the presence of Saint Emilion’s Mayor and Alexei Mechkov, Russia’s ambassador to France, the inauguration was also an opportunity to toast the ties between the two countries.

Of his €12 million project Jean Nouvel modestly commented. “We must not judge modern architecture today – it judges itself with time.”

Since 2017 chef Ronan Kerverrrec, formerly at La Chèvre d’Or, Eze, has charmed locals and tourists with delicious cuisine and a warm welcome. With two Michelin stars for the picturesque La Table de Plaisance, “I’m looking forward to bringing a third to Saint Emilion,” he says.

Choose rooms either in the hotel, the village and, three kms away, the Vineyard House (from about €355 for two). 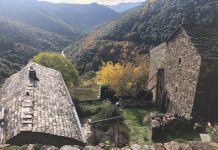