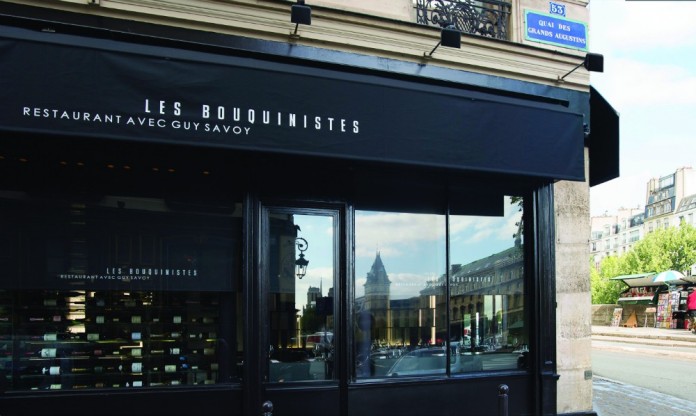 Though Parisians are less smitten with Saint-Germain-des-Prés today than they’ve been at anytime since I arrived in Paris in 1986 – rising property prices today make it more aspirationally bohemian than actual, so it’s no longer a place they go to play very much anymore – the beauty of the heart of the Left Bank continues to seduce visitors to the city. Many chose to stay in Saint-Germain, too, which is why I’m regularly asked for good French (as opposed to the Italian or Japanese restaurants that are so much in evidence) tables in this neighbourhood, especially places that stay open in August.

It was with this in mind that I recently went to lunch at chef Guy Savoy’s Les Bouquinistes, a long-running contemporary French bistro overlooking the Seine that is celebrating its 20th anniversary this year. When it opened in 1994, it immediately became a smash hit for chef William Ledeuil’s inventive contemporary French cooking, and given its strategic location, convenient serving hours and reasonable prices, it also quickly found a place in what might seem to be every guidebook to Paris ever published. There’s nothing inherently wrong about this, of course, but  as a long-term Parisian, we’re always looking for under-the-radar addresses to call our own.

Arriving at Les Bouquinistes, the welcome from alert young restaurant director Cédric Jossot was warm and the dining room had been given a smart makeover by talented interior-designer Jean-Michel Wilmotte, Guy Savoy’s preferred designer, who is also working on the new space on the Monnaie de Paris (Paris Mint), where the chef will move his namesake restaurant within a year or so.

Chef Stéphane Perraud does sophisticated contemporary French bistro cooking based on seasonal produce, and his €31 and €35 lunch menus are one of the best buys in town. The menu changes regularly, but the salmon tartare and Herefordshire beef with mange tout (snow peas) and baby potatoes that I enjoyed with friends visiting from New York were beautifully cooked, and the glass of wine that is served with each of these menus was a well-chosen Bordeaux.

For a lusher declension of Perraud’s style, go for dinner, however, and try dishes like his impeccably made foie gras with kumquat jam or shrimp in a spicy Thai bouillon with carrot-ginger condiment and grilled vegetables, both starters, and main courses that include lamb with tomato-basil gnocchetti or braised suckling pig with chanterelles and mashed potatoes, and the raspberry pistachio financier with oat-milk sorbet for dessert.