Home Learn History God! This Place is Beautiful or the Amazing Story of Loc-Dieu 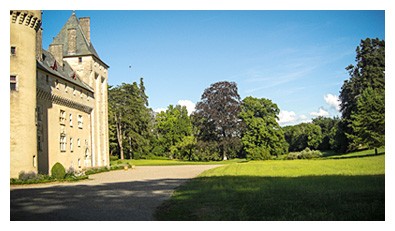 As the oldest Cistercian abbey in the Aveyron, it might seem like a square of stones laying in the countryside. However there’s something magical about Loc-Dieu — meaning ‘God’s location‘— and it’s sort of a miracle that such a harmony has survived throughout the centuries.

The Loc-Dieu park extends over 150 acres. Gently rolling greens, a quiet pond in which reflects the silhouette of the castle and high foliages, that’s quite a surprise after one knows the stunted trees to be found on the plateau surrounding, an oasis! One can imagine the density of the primitive forest. The people during the prehistoric times had established their sacred burials around this natural sanctuary. There was an impressive dolmen standing. It was once said — is it truly a legend? Not for sure — the druids were adept at human sacrifices.

Unimpressed by the mystery surrounding the place, brigands settled there during the 8th century, right after the devastating invasion — booted out though by Charles Martel at Poitiers’s battle in 732 — by the Moors in Rouergue. Bandits gave a bad reputation to the location, inspiring more fear and horror than anything else, more so that the name of ‘Locus Diaboli’ — Devil’s Location — got given to it.

Medieval monks were somehow conquerors. They drew, in accordance with ‘The Rule’, the energy to deliver the mission they were assigned to; push back the Evil and build on Earth the City of God.

Sometimes their adventure required physical courage and endurance. On March 21, 1123, Roger, abbot of the monastery of Dalon, in Limousin region, picked up twelve enthusiast monks to found a new abbey. On their way along the Roman road from Cahors, they stopped at Puech d’Elves. After planting the cross on the ancient dolmen, these sons of Saint-Benoit built their cenobite huts. The nearby brigands did not like their new neighbourhood, thus tried to scare the monks, to deprive them from their meagre belongings. However, Adhémar III, bishop of Rodez, and local nobles proved themselves quite generous and the building of the abbey was on its way. Monks had to remain silent when working, stopping every hour to sing a psalm. Eventually, the new abbey was done in 1154. However they still needed to build the the abbey’s church.
Building the church seemed to be out of financial reach, so much that several abbots quit on it, after considering the magnitude of the task. However, a simple monk Albert, got elected abbot father in despair. He found support and financial help from the rich abbey of Bonneval. Albert’s successor, Pierre I got the church finished and consecrated in 1189, after more than thirty years of ups and downs. Thus ‘Locus Diaboli’ became then ‘Locus Dei’, nowadays Loc-Dieu.

For centuries, men prayed, worked in silence, practiced charity at Loc-Dieu. Monks cleared and organized a beautiful agricultural space. They fish from the pond as they abstain from meat. They helped out the disabled Crusaders back from distant crusades. They welcomed pilgrims on the road to Compostella.

However, the Saint-Benoit Order fine balance got disturbed by History’s turmoils. The Hundred-Years War devastated Loc-Dieu. During the XVIth century, the disaster is of a different nature; revenues of the abbey are now awarded to an outside recipient, the commendatory abbot. Many abbeys got ruined by these privileges and the monastic spirit became scarce.

In 1789, Loc-Dieu is home to only three monks. In 1793, land and buildings are sold as national property to a local businessman, seduced by the farmland’s quality rather than by the monastic buildings. It was the end of the abbey.

In 1812, a rich Villefranche de Rouergue entrepreneur bought the estate and monastery, all in quite bad shape. His son brought it back to life running the farm business. He built his apartments above the chapter room, where the monks got their dormitory. Then, his brother Alfred took over the estate and monastery. Alfred, an MP, sponsored hospices, schools, bought the (in ruins) Château de Najac to save it from its fate. The Romantics such as Victor Hugo, François-René de Chateaubriand, or Prosper Mérimée found inspiration in the Middle Ages. The renovation of Loc-Dieu at this period of time embodies this trend in stone.

From 1855 on to now, the restoration of two other wings of the monastery and the church have been on-going.

Add this unique French experience to your bucket list!

Experience (my) France is a small tour organization, the only known offering very special guided and hosted French immersions. The 10-day tours are guided and hosted by Véronique. She’s ready to take you on an off-the-beaten path tour of France’s hidden gem, Aveyron, located south west of France. From June to September inclusive, each experiential tour is customized, allowing you to live at a slow pace, share your experience with like-minded travellers, and live like a local in a region where food, wine and culture are part of daily lives.

If you’re not drawn to large organized group tours, the idea of travelling with a maximum of 7 people is very appealing. It allows for flexibility and down-time in the itinerary, which is a must for an experiential tour. Another amazing thing about this experience is how few other tourists you will ever see—and no tour buses!