In San Francisco at the French American Business Awards (FABA), the partnership between France and America showed a strong, inspiring way forward for all economic leaders.

In fact, Emmanuel Lebrun-Damiens, Consul General of France in San Francisco who gave an introductory speech, tweeted, “Congratulations to all nominees and awardees, you are the representatives of an amazing French-American business community in the Bay Area.”

The annual awards sponsored by the French-American Chamber of Commerce in San Francisco (FACCSF) was held on Thursday, June 7. The event honors and rewards entrepreneurs and executives in the French-American business community for their annual results and lasting performance in management and leadership. This year there were of 50 nominees in 11 categories appraised by over 120 expert jury members.

“This 5th Edition of the annual French-American Business Awards has been another exciting occasion to showcase the diversity of our French Ecosystem thanks to new categories,” said Eve Chaurand, President of FACCSF. “We are proud to highlight so many new French-American success stories every year. Congratulations to all the laureates.”

The categories included several social-oriented ones such as Woman Role Model, Social Impact and Giving Back Award. Technology awards included High Tech over $30 million in revenue or funding, High Tech under $30 million in revenue or funding, and Trends of 2018: Leaders in Smart Mobility. General business was awarded for Startup of the Year, Agribusiness, Food Business, Wine and US Investment in France. 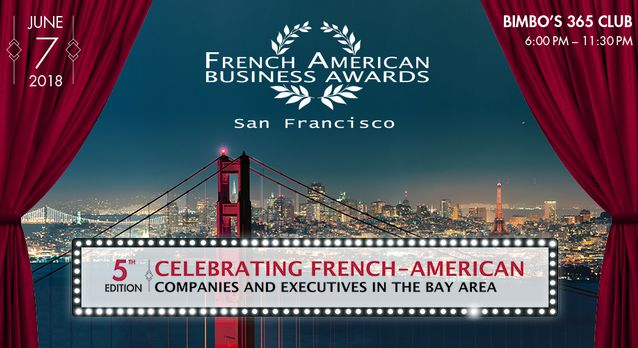 The Woman Role Model Gold Award was given to Fidji Simo, Facebook Vice President in charge of Video, Games and Advertising in News Feed. She manages the team of product managers and engineers who build News Feed video, game and ad interaction experiences. She was on Fortune Magazine’s “40 Under 40 annual ranking and on Fast Company’s list of the Most Creative People in Business. She was also ranked 10th on Vanity Fair’s list of most influential French people in the world.

The Gold Award for Social Impact was given to Alter Eco, a manufacturer of organic, non-GMO snacks in 100 percent compostable packaging. The winner of the Giving Back Award was Jean-Noël Fourmeaux because of his involvement and support in the aftermath of the October 2017 wildfires in Napa County. He is a 35-year veteran of the wine industry in Napa Valley and owner of VGS Chateau Potelle winery.

Algolia won the Gold Award in the High Tech over $30 million in revenue or funding category. It reduces the complexities of building hosted search and discovery platforms for websites and mobile apps, and manages 40+ billion search queries a month. The High Tech under $30 million in revenue or funding Gold Award went to Dawex, a global data marketplace for organizations to meet, buy and sell data securely and in full compliance with international rules and regulations. The winner of gold in Trends of 2018: Leaders in Smart Mobility was Luc Vincent, Lyft VP of Engineering for Self-Driving where he leads the self-driving efforts. He spent 12 years at Google including Senior Director of Engineering for the Geo Group where he developed StreetView.

The Jury’s Choice Award for Startup of the Year was awarded to InkSpace Imaging. It developed a new way of manufacturing Magnetic Resonance Imaging (MRI) coils using printed electronics, resulting in light, flexible coils that can be comfortably placed over patients and improve exam quality.

The winner of US Investment in France Gold Award was Zendesk. It offers a customer service and engagement platform that scales to meet the needs from startups to big enterprises and supports more than 30 languages. It’s headquartered in San Francisco with 15 offices worldwide.

The FABA event is growing in popularity and reputation. There were over 300 attendees at the dinner event, and the French American Chamber of Commerce in Seattle and other cities are replicating the awards.

All the laureates of FABA 2018 are listed at FABA.