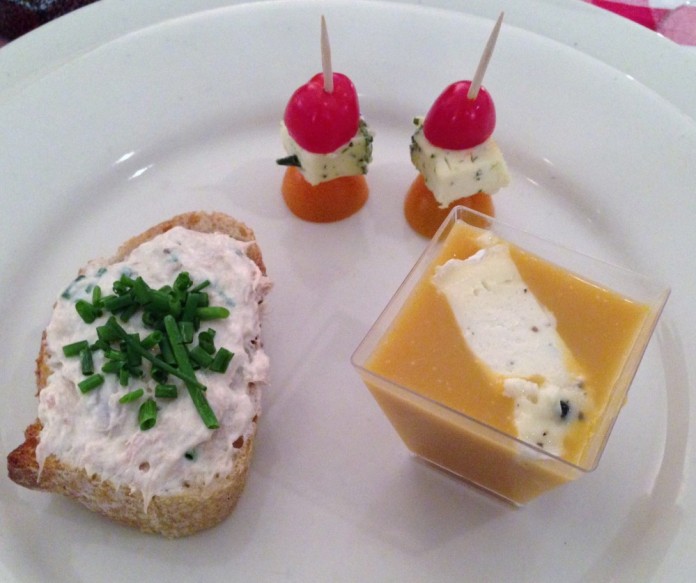 Coming on the heels of a recent Wall Street Journal piece about how “nobody RSVPs anymore”, I was only a little surprised to see so few people at a recent gathering. It was a raclette dinner for journalists at the French Cheese Board. The minute I finished reading the invitation, my RSVP was sent!

As it turned out, it was a fun, intimate dinner with a bunch of raclette-crazed people along with a couple of newbies (to raclette) who quickly got into the spirit.

We were greeted with glasses of Crémant d’Alsace Prestige Brut, a lovely sparkling wine, and Fromager d’Affinois, a soft, creamy cheese, similar to brie. When we sat down at the table, there was a trio of appetizers. The simplest was a skewer of orange and red grape tomatoes sandwiching a morsel of the garlic and herb Fromager d’Affinois. Next to that was a small serving of butternut squash soup with the truffled version melting into it. The third was a slice of baguette with le Fromage Fouetté, a mild whipped cheese, used as a base for a tuna mousse. All three were delicious and easily duplicated at home (which is what the French Cheese Board is hoping you will do).

Raclette is traditionally made by holding half a wheel of cheese over a fire and scraping the melted part onto a plate with potatoes, charcuterie and cornichons. Since that’s not always practical, restaurants will have an electric melter, designed to hold a quarter or half-wheel of cheese. What you usually find here are small trays that fit over a few votive candles, but they lack the drama of the big apparatus. I was happy to see the long table set with raclette machines strategically placed along with the smaller trays.

As is traditional, bowls of steamed (Yukon Gold) potatoes and plates of charcuterie were passed around as we waited for the cheese to melt. We let the newbies have the first go and they were quickly hooked! The rest of us didn’t have long to wait as the cheese on the big holders not only melted faster, but was tastier, as it started to bubble and brown. The Riesling (a 2012 Réserve from Willm) we had to go along with it was a great pairing.

Dessert (yes, we made it to dessert), was the time for the whipped cheese to shine. It was used in a lovely cheesecake with a surprise layer of apple and “frosted” with yogurt. Delicious and surprisingly light – a nice finish.

To prove that all of the recipes were easily prepared (remember, they want Americans to start cooking with their cheeses), all the food was made in the FCB kitchen by the reps from Interval. Email me for copies of the recipes or you can pick them up at the French Cheese Board. The Fromager d’Affinois is pretty easy to find (Murray’s, Zabar’s, Amazon), the Fromage Fouetté is exclusive to Whole Foods and the Raclette in pre-cut slices is at Trader Joe’s. Don’t worry that you don’t have the big melter, I’ve done raclette successfully at home with ramekins under the broiler (and plan on doing just that with the slices they sent me home with).