Home Learn History From the 1906 Fire to the Internet, French Libraries in San Francisco... 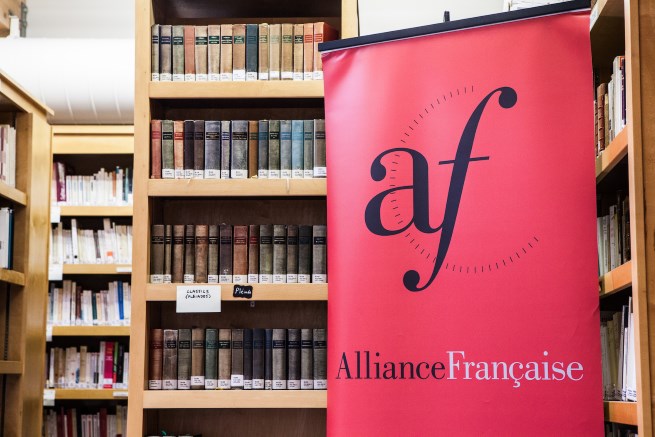 The oldest French library in the San Francisco Bay Area is located at the Alliance Française San Francisco (AFSF.)  The newest French library is found at the Alliance Française Silicon Valley (AFSCV.) What they have in common is reinvention as useful places in our changing world where much information is found online, and books are read on screen.

Their histories are completely different. One is a product of the Gold Rush, while the other is a product of a new social need. One rose from the ashes of a fire that destroyed the books, the other rose because there were just too many books. But both have become important instruments to help students connect with each other and the French language.

During the California Gold Rush, up to 25,000 French left to work the mines and settle in San Francisco. A French District called “Little France” developed around what is now called Grant Street— filled with cafés, bakeries, grocery stores, laundries, restaurants, a French bank, church and hospital. What was missing was an association for the French to join where they could keep in touch with French culture and politics. It was the time of the Franco-Prussian War where France lost the Alsace-Lorraine areas, and in July 1871, La Ligue Nationale Française was created. Although popular at first, in its second year popularity began to wane. In August of 1872, the idea for a French library was proposed. 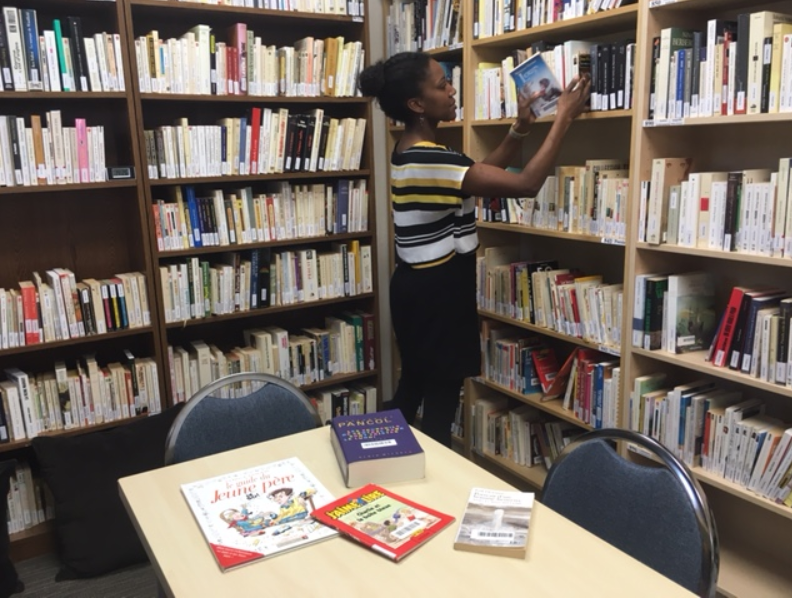 “By encouraging the French people to know their literature and especially their history, they would regain their enthusiasm for patriotic causes,” claims the “History of the French Library in San Francisco: 1872 to 1697,” a Fall 2002 article by Colette Gauthier Miles in The Argonaut, the journal of the San Francisco Museum and Historical Society.

It worked. People began donating books, and by the end of 1874 there were enough books to begin organising the library. By 1877, there were over 10,000 books and pamphlets (a popular way to communicate in those days), the majority in French, but the pamphlets were in 85 different languages. People flocked to the lectures held in French at the library located at 1209 Sutter Street.

By 1883, the year Alliance Française was founded, the French Library contained many works of classic French literature, along with one of the finest collections of books on early California. There were also many sets of books on the arts, Larousse dictionaries, a 1597 French edition of Bayle’s Dictionary, 21 volumes of a French technology dictionary, and a unique collection of laws, edicts, and treatises that dated as far back as 1339.

Then came the 1906 earthquake and fire. Everything was destroyed. Everything.

According to the May 1906 issue of The Library Journal, in a report on the effect of the fire on all of San Francisco’s libraries, “In rough figures, over 700,000 volumes have been destroyed, and a conservative estimate of the money loss is stated as three million dollars; this, of course, without consideration of the unique historic value of much of the material.”

The French Library started again from scratch. While local book drives were organised, French libraries and bookstores sent hundreds of volumes to the Ligue Nationale to restock the shelves of the French Library. It found a new location at 110 Sutter Street, and soon had an even larger collection.

But it was not an easy, or profitable, business. Rent increased, deficits mounted, librarians were unprofessional and held a lack of interest attitude that was described in The Argonaut article as “J’menfoutisme” (an I-don’t-give-a-damn attitude.) In 1927 the library moved to 414 Mason Street, and the Alliance Française proposed merging with the Ligue National. In January 1929, the merger was completed. Alliance Française San Francisco was now the owner of the French library.

The collection is located at AFSF on Bush Street, and is the first thing a visitor sees when entering. It includes over 25,000 books, including a complete collection of first edition Voltaire tomes, hundreds of CD and DVD books, the popular bandes dessinées (comic books,) and an espace jeunesse for kids. The focus of the Alliance Française organisation has always been to maintain the use of French and promote French culture. The library works to modernise its operations to keep current and useful. 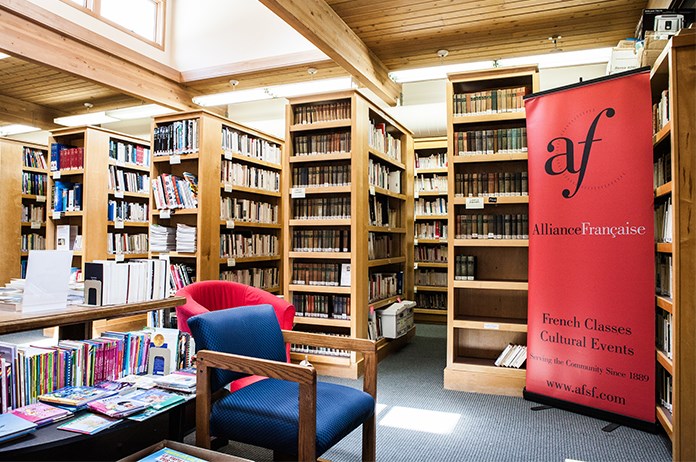 “The library is part of what we do,” said Noemie Causse, AFSF’s director of Cultural Center and acting librarian. “A student needs to be immersed (in the language) to learn fast. Library access is part of the classes we offer, there is access to the culture with it, and it’s available to everyone.”

The newest French library is located 50 miles south in Campbell, in the midst of Silicon Valley. This library was new last year, and originally located in a room in a building shared with other businesses. Sometimes story time reading with kids was noisy, and the neighbours requested stopping it as it interrupted their business. The library is currently moving into a bigger location in the same building, so story time is still on hold.

The idea for the AFSCV library was developed three years ago. Many members had donated books, and eventually the organisation was overwhelmed.

“These were nice books, not just old ones,” said Upi Struzak, president of AFSCV. “Rather than sell them at book sales, we decided to try to make a library.”

At first, volunteers stored the books in their garages. But there were soon over 1,500 books, videos and bandes dessinées. After a space was found to house the library, volunteers worked three days a week to organise, index, create a database, and microchip the books to help manage their location and make check-outs and returns easier.

“We realized there is a need for a French library here,” said Struzak. “Our population is made up of young families and older people who could use the library as a place for getting outside their homes and finding company. (With the library) we have the possibility of providing a ‘Maison de France’ for our members and the community, making the library a part of everyday life.” 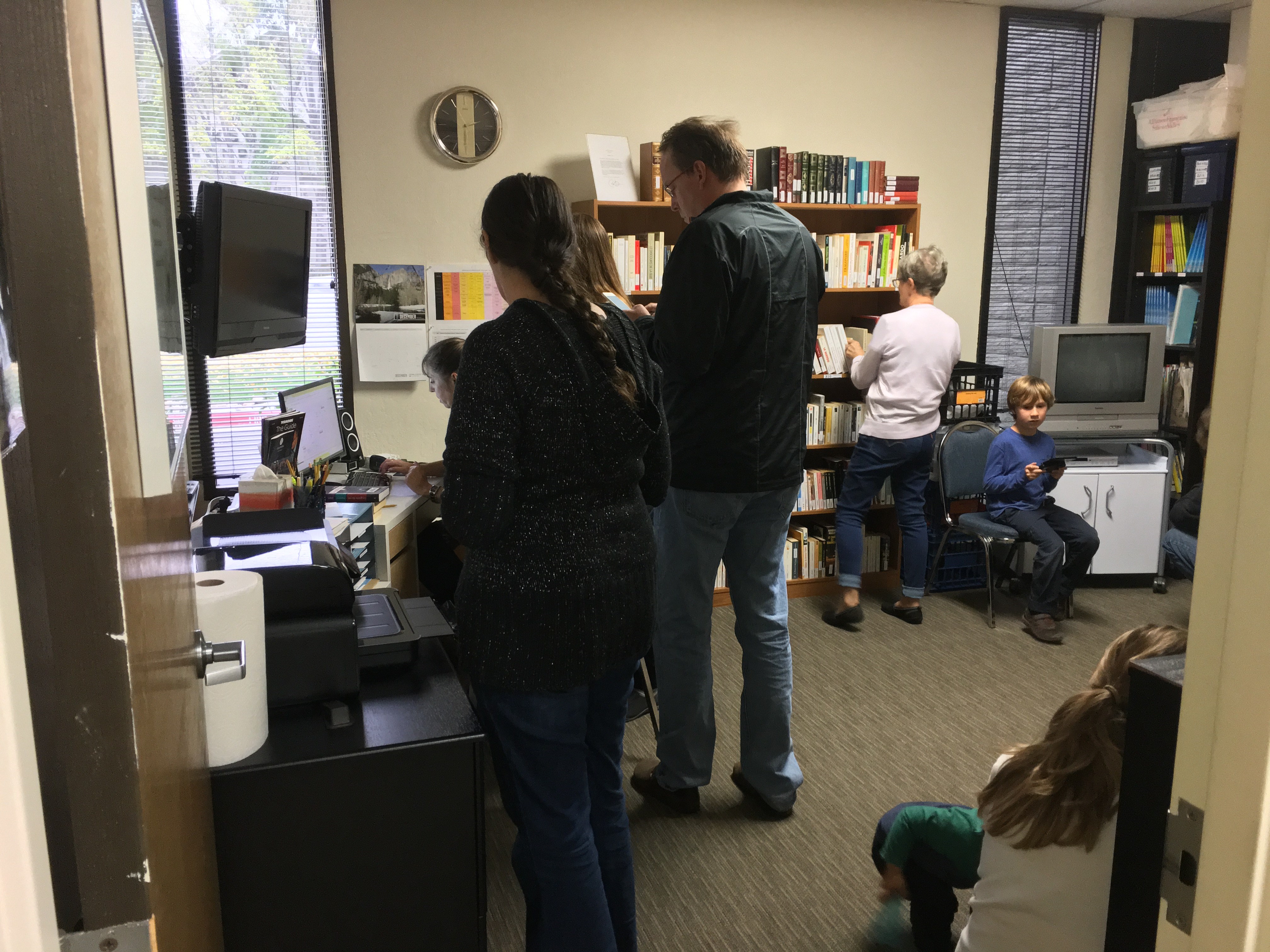 Struzak envisions the Maison de France library to be a place where French people and Francophiles meet, drink coffee, talk and read books. The French population in Silicon Valley is large and active, and they want to “keep in touch with the French part,” according to Struzak. Although not quite there yet, at least the easy access to coffee part, it is AFSCV’s goal.

A part of modernisation of the Alliance Française libraries is access to Culturethèque for all members, the largest e-library of French books, magazines, videos and audio. The two Bay Area libraries approach it a bit differently. Causse thinks it is “better for people who don’t have the time to come (to the library,)” while Struzak wants to incorporate it in the Maison de France concept.

“It’s online and touchable, and we need to make it used,” she said. “People don’t know they have access to it, and it’s full of learning materials. Magazines, books, videos, movies are there to help connect with France and the French language.”

Libraries are also places to explore interests and find new ones. “A student can meet their own interests in French,” said Struzak. “If they like dolphins, the library provides information so they can learn French while they are reading about something they like.”

Both libraries expand the language learning process. The oldest and the newest French libraries in the Bay Area connect students with French and French culture, whether online or traditional paper. That’s a reinvention even a fire can’t destroy.