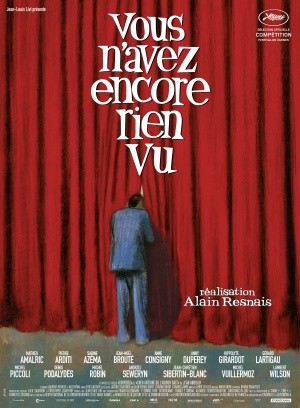 After the tremendous critical and popular success of De Battre Mon Coeur S’Est Arrêté and Un Prophète, Jacques Audiard returns with a moving love story between Stéphanie, a trainer of killer whales (Marion Cotillard), and the rude, unemployed Ali (Matthias Schoenaerts). A brutal accident leads the two loners to develop a much deeper bond. This remarkable and poignant drama confirms Audiard’s skyrocketing stature among French directors, in no small part thanks to superb cinematography by Stéphane Fontaine and brilliant acting—yes, Marion Cotillard is far better here than in the latest Batman, and Matthias Schoenaerts is on a par. Both of their characters fight their way through life against all odds, in this unconventional romance that tops every other film made this year.

Fifty-three years after his glorious debut with Hiroshima Mon Amour, Alain Resnais still casts his hypnotic spell on French cinema. Presented in Cannes last May, his latest film is another masterpiece, despite its dryness: Thirteen actors are notified that playwright Antoine d’Anthac (Denis Podalydès) has died, and told that his last wish was for them to gather at his home. Every one of them has, at some time over the past decades, played a part in various productions of his play Eurydice, and they are asked to watch a filmed version of it performed by a cast of young actors, to decide if the play still merits being staged. As the film unfolds, the actors gradually begin to relive their former roles. The fictitious playwright d’Anthac is based on the real Jean Anouilh, and the 90-year-old Resnais has assembled a stellar cast—Sabine Azéma, Pierre Arditi, Anny Duperey, Anne Consigny, Lambert Wilson, Mathieu Amalric, Michel Piccoli—in this inventive homage to acting, dealing astutely with the relationships between film and theater, art and death.

During the past few years French independent cinema has managed to bring to the screen energetic romantic comedies imbued with a hint of philosophy. Released in September, Camille Redouble tells the story of a middle-aged woman (Noémie Lvovsky), struggling with the failures of her life. But a weird evening—and a few drinks—allow her to travel back in time to her teenage years, a few days before her mother’s death and her meeting with her life-long love Eric. Will she be able to correct her mistakes? Or are we meant to learn how to deal with our past? With its 1980s musical score and its humorous misunderstandings, this ironic movie is a delicious, sweet-and-sour treat.

Six years after Sofia Coppola’s pop take on Marie Antoinette, Benoît Jacquot delivers a very different story, in tone and purpose. Les Adieux à la Reine focuses on the troubled relationship between the queen (Diane Kruger) and her personal reader (Léa Seydoux), behind the usual scenes of opulence in Versailles, in the cramped corridors of the palace. But the Revolution is nearing and their world is soon going to collapse. Visually breathtaking, this rare costume film manages to capture the confusion and the dread that must have been felt in the last days of the monarchy. Kudos to the performances of the female cast, including German actress Diane Kruger, whose beauty and slight accent make for a great Marie Antoinette.

The first film of popular French writer and man-about-town Frédéric Beigbeder, L’Amour Dure Trois Ans is a clever adaptation of his first bestseller, published in 1997. The lively French rom-com follows the hijinks of a young literary critic and society columnist, Marc Marronnier (Gaspard Proust), whose marriage has recently ended in divorce. But he soon begins an affair with his cousin’s wife Alice (the gorgeous Louise Bourgoin), who contradicts all his previous testosterone-fueled ideas about love. Snarky and tongue-in-cheek, the comedy is packed with funny scenes and unforgettable aphorisms, and at one point notes that “In the 21st century, love is an unanswered SMS”.

Trailors of most of these films are on www.youtube.com

When you order DVDs from France, you’ll need a multiformat DVD player that can read Zone 2 DVDs.