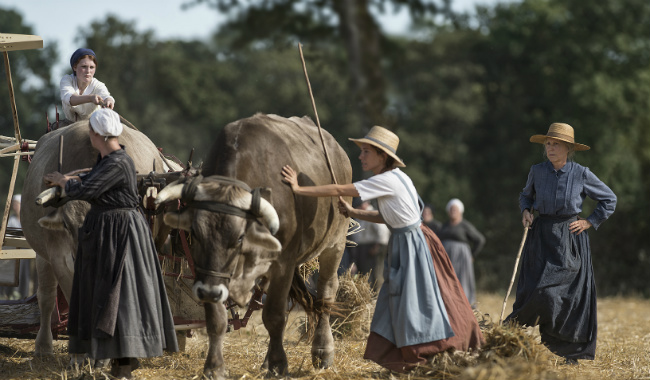 “I can’t find him,” cries Solange, staring at an atlas trying to locate the German town where her husband is being held prisoner. Her mother Hortense picks up a magnifying glass and points to a dot on the map. “There,” she says sullenly, turning away arms protectively clasped against her chest. At least, she consoles her daughter, they can find solace in the knowledge he is alive, unlike her two sons languishing in the trenches somewhere in northern France. This all-in-all restrained scene truly captures the essence of The Guardians.

Far from playing up the inherent pathos of their situation, Xavier Beauvois’s matter-of-fact and subdued storytelling is as unnerving as it is affecting. We’re lightyears away from Hollywood’s maudlin war-time epics: these dauntless women have neither the luxury of grief nor time.

Based on the novel by Ernest Pérochon, Beauvois’s measured drama follows the pair as they grapple to hold down the family farm with their men shipped off the front. Struggling to cope alone, Hortense (Nathalie Baye) reluctantly hires hard-scrabble teenage orphan, Francine (Iris Bry), who soon becomes an invaluable member of their all-female clan. Simultaneously shielded from the horrors of the battlefield and left to wage their own fight on the homefront to keep afloat, these accidental ‘guardians’ of a world on the verge of collapse plough, furrow, and toil away; the monotony of their daily grind only fleetingly broken by intermittent visits from Hortense’s sons, Constant and Georges, and Solange’s husband Clovis (before his eventual capture), from the front.

Far from the joyous homecomings they so long for, as the years pass these brief and increasingly fraught reunions highlight the distance growing between them. In one particularly unsettling scene, the women stare pointedly at their plates while a zombie-like Clovis back on a short leave unburdens himself, confusingly ranting about the absurdity of a trench-bound stalemate where good men on both sides perish over a few metres of mud. Their strained silence, mute distress and his desperate outpouring of words paint a truly heart-breaking and vivid picture.

While the film’s lagging pace and especially drawn-out scenes of chores on the farm may test mainstream audiences, they skilfully capture the unbearable stasis of a country in the throes of war. The seasons roll on relentlessly and yet the lives of those left behind are indefinitely stalled.

Subtly and simply told, only ever hinting at the bloodshed beyond the lush fields of Limousin, Beauvois and his quietly charismatic cast deftly convey the sheer devastation and absurdity of warfare. This is a rare and nuanced ode to the Great War’s (and so many others) unsung heroines.

The Guardians opens in New York on Friday, May 4 at the Quad Cinema. For more information, visit: www.musicboxfilms.com