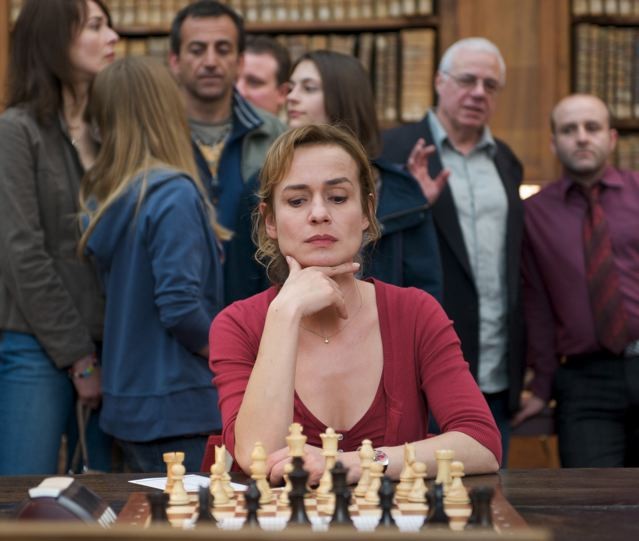 I’ve always been a big fan of Kevin Kline, so when I learned that he made a film all in French I was intrigued. Playing a gruff and reclusive American living in a rather ghostly villa in Corsica, Kline is the perfect partner for the luminous Sandrine Bonnaire in Queen to Play, a subtle and sophisticated film about newfound passion and mid-life triumph.

Bonnaire plays Hélène, a hardworking hotel chambermaid struggling to make ends meet with her husband and teenage daughter. One day while working, she watches a pair of American lovers playing an intense game of chess on the sunny terrace of their hotel room. It’s a lovely and very sensuous scene—Hélène in her dowdy apron making the bed and plumping the pillows, stealing glances at the couple seated on the other side of a billowing, transparent white curtain, as they smile across the chess board, caressing hands between moves. Fascinated, Hélène watches as the woman (Jennifer Beals of Flashdance, looking sexy in a lace-trimmed charmeuse nightie) wins the match.

Her interest piqued, Hélène starts teaching herself chess at night and immediately becomes obsessed by it. She also works as femme de ménage (cleaning woman) for a retired American doctor, Kröger (Kline), and when she discovers a chess set while dusting his cluttered living room, she summons up the nerve to ask him to teach her. Kline is one of America’s most gifted actors, and here his ability to convey emotion with a lift of the eyebrow, a tilt of the head or a silent gaze serves him well. Initially arrogant and brusque—he has to be reminded of her name at first—he reluctantly agrees to one session only, but becomes intrigued when she shows a surprising talent for the game. Soon the cleaning sessions turn into chess-playing en tête-à-tête.

The cold and distant Kröger thaws as he begins to see Hélène as a real, and interesting, person—when she picks up his copy of Jack London’s Martin Eden, he gives it to her, suggesting she read it. Hélène blossoms, partly from enjoying his attention but mostly because the discovery of her own talent forces her out of the cocoon of her quiet life, giving her unexpected self-confidence. As she learns, the queen (la dame in French) is the most powerful piece on the board.

No one in the village knows what to make of the new relationship between the reserved Hélène and the mysterious widower—least of all her husband and daughter. One of the film’s many satisfying aspects is the complexity of its characters. Hélène’s husband goes through stages of bewilderment, jealousy and self-reproach; the daughter evolves from a surly teenager embarrassed by her family’s humble lifestyle into her mother’s staunch supporter.

Based on the novel La Joueuse d’Echecs, this is director Caroline Bottaro’s first feature film. It’s an impressive debut—a tense and absorbing film that will captivate even those who, like me, know nothing about chess.

As for Kline’s French, this is not his first cinematic plunge into the language—he had a few French lines when he played the prodigal son of a winemaking family in Lawrence Kasdan’s French Kiss in 1995. But this is the first time he’s played an entire film in French, or any other foreign language. He admits he had to work hard at it, first with several language coaches in New York, then with another mentor throughout the shoot. The work paid off, and the result is a pleasure to watch. As his character says in the film, “When you take a risk you may lose, but when you don’t take a risk, you always lose.” With Queen to Play, everybody wins.