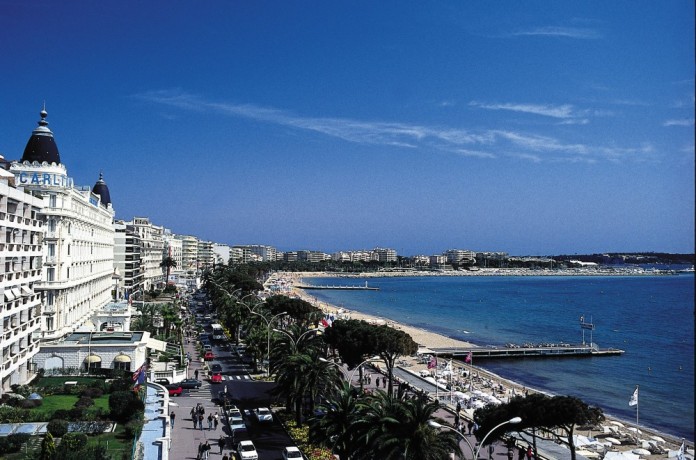 It’s the witching hour on the Croisette, the fabled seaside promenade in Cannes, when the sea goes purple and the pale lights blink on. Down on the private beaches, the lounge chairs have been carted off and white-jacketed waiters are busy laying out champagne glasses under the canvas tents. Suddenly, like clockwork, throngs of film industry people emerge from their hotels, strutting their black tie finery, all heading toward the Palais des Festivals for the evening festival screening. As the limos pull up to the entrance, hundreds of gawking fans, packed behind the barricades, break into wild applauses and cheers. Some have been camped there for hours, hoping for a glimpse of a favorite star.

You’ve seen it all on TV, but you have to be there to believe it. It’s pure pandemonium: flashbulbs popping, photographers shouting at the top of their lungs (“Sharon, this way, look over here!”) and actors posing, waving and smiling. Up the famed red-carpeted stairs they go (mind those stilettos), then the perfunctory kiss or handshake with all-powerful Festival President, Gilles Jacob. Then the doors are shut, all is silent.

But not for the privileged audience with invitations or accredited badges, now inside the auditorium. The haunting bars of composer Camille Saint-Saëns’s Carnival of the Animals plays over the Festival logo on the big screen, and the atmosphere is electric. Little does it matter that 90-odd minutes later, as the end credits roll, there may be a standing ovation—or a depressingly polite flutter of applause. History is in the making, or so it feels in this cinema-centric crowd, during those twelve giddy days of screenings, deal-making and lavish fêtes, when Cannes basks in the international limelight. During the closing ceremony, the coveted Palme d’Or—a 24-carat gold palm frond designed by the Swiss jeweler Chopard—will be awarded, along with seven other prizes, including the Jury Prize, Best Screenplay, and Best Director. Yet, the official competition is only part of the whole picture.

As a long-time Cannes Festival-goer and reporter, I’ve experienced my share of glittery evenings, dancing until dawn on moonlit beaches next to champagne-swilling stars, and then interviewing them, bleary-eyed, the following morning. Sometimes the encounters are serendipitous: once, in the lobby of the Hôtel Carlton, a mad rush of Monica Belluci-chasing paparazzi pushed me straight into the arms of director Alan Parker. Sure, you might see actors like Louis Garrel striding down the Croisette—not everyone is hiding out at the glitzy Hôtel du Cap or on a private yacht—but stargazing is not really what the Cannes Festival is all about.

Few visitors realize that the general public can share in an often enthralling selection of films by attending one of the “parallel” festivals organized in addition to the official competition (see box) called La Quinzaine des Réalisateurs, the Director’s Fortnight. Created in 1968 by a group of French filmmakers, this edgy selection of international films—which range from avant-garde indie experiments to the latest works by established filmmakers—are meant to bypass political influence and censorship. More often than not, they become the talk of the town. Who could forget the thrill of being at the buzzy première of The Blair Witch Project or Boyz n the Hood? Quinzaine tickets, sold in a pavilion just next to the Palais Stéphanie auditorium, also entitle audiences to attend a live public debate with the director and cast, held just after the first screening.

Another enjoyable Festival venue open to everyone is Le Cinéma de la Plage, featuring some of the great movie classics shown on a giant screen set up on one of the Croisette beaches, where the wannabe local starlets still sunbathe topless by day.

Bare breasts, of course, have always contributed to the media’s love affair with the Cannes Festival, ever since 1954, when Simone Sylva whipped her top off in front of the cameras, much to the delight of the photographers and her escort, Robert Mitchum. Then along came Brigitte Bardot, who was the bikini-clad main attraction for years, until she retreated from the trappings of stardom and boycotted the festival for a decade.

The idea for the Cannes Festival dates back to the late 1930s, when Louis Lumière, the inventor of the motion picture, planned to preside over a new film festival’s first edition, “to further the development of the cinematic art in all its forms and create a spirit of cooperation among producing nations.” The idea was to offer some competition to the annual Venice film festival, then in the hands of the Italian Fascist government, with a monopoly on cinematic prize-giving. The new French festival was scheduled to open on September 1, 1939—but instead the Nazi army invaded Poland and the world went to war. It wasn’t until 1946 that the first Cannes Festival was launched, held in the old Winter Casino. Major French and international directors presenting their films included René Clément, Jean Cocteau, Charles “King” Vidor and Alfred Hitchcock. In those early years, the spirit focused more on celebration than competition.

These days, an award from Cannes guarantees even a low-budget film with unknown actors a whopping international distribution, as demonstrated by 2008’s unexpected win, Entre les Murs (The Class), directed by Laurent Cantet. “The Festival invented Cannes,” claimed President Gilles Jacob during an interview about his memoirs, La Vie Passera Comme un Rêve (Life will Pass like a Dream).

Some of the city’s local residents might disagree, however. Beyond the 12-day Film Festival and the city’s annual trade shows—when the streets are swarming with advertisers (MIPCOM), TV producers (MIPTV), and musicians (MIDEM)—Cannes is also a city for all seasons.

Take an early morning stroll in the Forville Market, one of the coast’s most uproarious, colorful markets with a dazzling array of fruit, vegetables, flowers and fresh fish. Those who crave the authenticity of the city’s pre-designer-boutique era should explore Le Suquet, the hillside old quarter whose steep and winding cobblestone streets are lined with restaurants and shops. At the top, climb the 12th-century watchtower for a spectacular view of the bay of Cannes and the Lérins Islands off the coast. Next to the tower, the Musée de la Castre displays archeological finds from all around the Mediterranean along with collections of 19th-century Cannes landscapes and primitive arts from Africa, Asia, Oceania and the Americas.

Even if no one invites you out on a yacht, you can pack a picnic and jump on the ferry to the Lérins Islands. The Ile Saint Honorat is a wild pine-forest sanctuary of winding paths and private creeks, home to a medieval monastery that has a private vineyard producing superb reds and whites, cultivated and blessed by the resident Cistercian monks (rooms are also available for the meditative-minded who enjoy a good quiet cell). On the Ile Sainte Marguerite, which was the site of an ancient Roman settlement, visit the Musée de la Mer in the Fort Royal castle where the legendary Man with the Iron Mask was imprisoned for 11 years. (Never identified, the mysterious masked man was later moved to the Bastille in Paris, where he died in 1703.)

Back in Cannes, don’t miss the opportunity to visit the sumptuous Villa Domergue, hidden away in the lush residential heights of the neighborhood called La Californie. Painter and art nouveau poster artist Jean-Gabriel Domergue and his wife Odette Maudrange, a talented sculptor, started building their own private paradise on the Côte d’Azur in 1934, transforming a bare hilltop into a Florentine-inspired home with a movie-set atmosphere and a Hollywoodian pool. The couple planted towering cypresses and oaks in the terraced gardens that overlook the bay of Cannes, created fountains and waterfalls, and filled the buff-colored stone house and landscaped paths with Odette’s sculptures—more than 60 of their joint works remain there today. They also added rare collectibles from their world travels. Not surprisingly, members of the Film Festival jury are often housed here—it’s utterly peaceful and the panoramic view is spectacular. Open to the public in summer only for art shows and open-air concerts, it’s well worth a visit.

Only minutes away is the house where Picasso once lived, which now belongs to his granddaughter, Marina Picasso. La Californie, in fact, is renowned for its private villas and gardens and their often exotic and extravagant architecture. And, a reminder of the long Russian presence on the Côte d’Azur, there is the Orthodox church of Saint Michael the Archangel, built for the large retinue of Empress Maria Alexandrovna, wife of Czar Alexander III, who spent many winters in Cannes.

Of the many grand hotels that line the Croisette, those most closely associated with the Festival are the Martinez, the Majestic and above all the Carlton, with its lush Belle Epoque decor. Festival or not, when the witching hour arrives, there’s no better way to enjoy it than by sipping an aperitif on the Carlton terrace watching the glittering world go by.

Aux Bons Enfants Set back on a narrow street in the Le Suquet district, a bistrot serving good, authentic and affordable Provençal fare, using the freshest ingredients from the neighboring Forville market. No phone, cash only. 80 rue Meynadier

Zplage, run by the Hôtel Martinez, is a stylish contemporary alternative to the usual beach restaurant, with a wide choice of “zen” cocktails and creative gourmet salads.73 blvd de la Croisette, 04.92.98.73.19. website

Le Grill Head for Cap d’Antibes and splurge on a drink at this recently opened restaurant and bar at Eden Roc, the Hôtel du Cap’s seaside annex, with a sleek teak deck jutting out over the Mediterranean. Even a diet soda is outrageously pricey, but it’s worth it for the atmosphere and the sunset view. Hotel security is iron-clad during the Festival, so best wait until it’s over. Hôtel du Cap, blvd J.F. Kennedy, 04.93.61.39.01. website

Le Palais There’s a throbbing electro ambiance at this nightspot open only in July and August. Adjacent to the Palais des Festivals, with a giant dance floor, starlit terraces and a crew of famous DJs. blvd de La Croisette, 04.92.99.33.33

Le Bâoli Another high-profile nightclub at the end of La Croisette. Behind the carved wooden doors there’s a glam Balinese decor, an exorbitantly priced Franco-Asian menu and an exotic outdoor palm terrace. If you can schmooze your way into the VIP room, you’re likely to spot top models along with sports, film and rock stars. Port Pierre Canto, 04.93.43.03.43. website

Originally published in the May 2009 issue of France Today; updated in May 2012 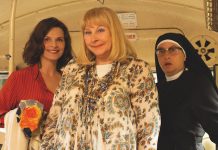