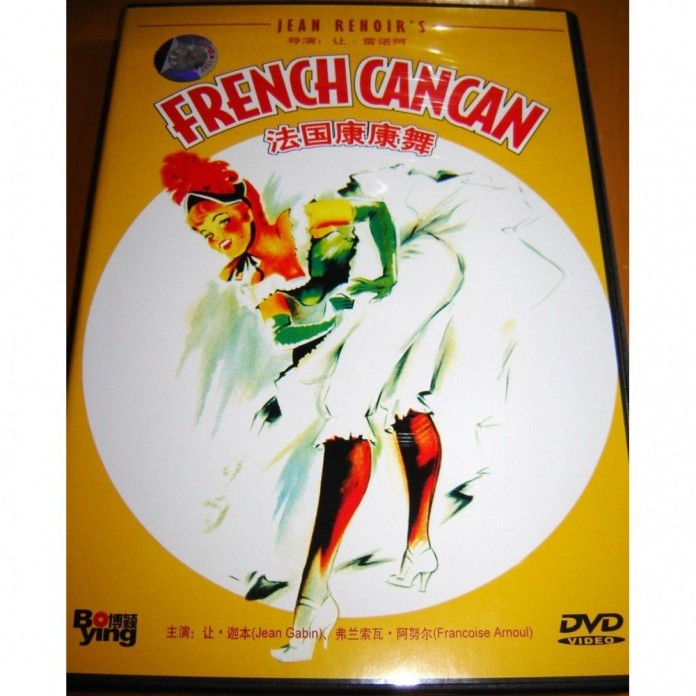 French filmmakers aren’t known for musical comedy, but there are a few films in which song and dance play starring roles.

There’s no business like show business, French style—realistic, cynical and extremely romantic. Jean Gabin stars as Montmartre nightclub owner Henri Danglard, who tries to revive his flagging fortunes by building a new theater—the Moulin Rouge—and reviving a nearly forgotten popular dance—the cancan. He plays Pygmalion to a young laundress, Nini, and makes her his star dancer. She falls in love with him, he jilts her and the show must go on. With references to Toulouse-Lautrec, Degas and Auguste Renoir, it’s Jean Renoir and Jean Gabin at their best in a memorable classic.

More than just a musical, this film that introduced the 21-year-old Catherine Deneuve to American audiences is almost an opera, with all-sung dialog. Geneviève (Deneuve), whose widowed mother owns an umbrella shop in Cherbourg, falls in love with auto mechanic Guy. Her mother objects to the romance, and after Guy leaves for military service in Algeria, Geneviève discovers she’s pregnant. Hurt by Guy’s silence—unknown to her, he’s wounded at the front—and encouraged by her mother, she marries a prosperous gem dealer who has fallen in love with her and promises to raise her child as his own. On his return Guy finds her gone and at first is depressed and angry, but eventually falls in love and marries. Years later the wealthy Geneviève, traveling with her son, meets Guy at the service station he now owns—they discuss, briefly, their very different lives, a conversation, or rather a duet, full of affection and regret. Literally all singing, if no dancing, it was a daring film in its day and it’s still a treat.

Real-life sisters Catherine Deneuve and Françoise Dorléac (who was killed in a car accident shortly after filming, at age 25) play Delphine and Solange, sisters longing to find lives and loves far from small-town Rochefort. Delphine teaches ballet and Solange composes and gives music lessons. Their mother, Yvonne (Danielle Darrieux) runs a café where the paths of all the film’s characters cross, including a carnival worker played by George Chakiris and a charming American played by Gene Kelly. The score, an almost continuous series of songs, is by Michel Legrand, and some of the film’s best choreography is Kelly’s for his own numbers. Entirely filmed in Rochefort, this is a very French tribute to big American musicals.

No one was more surprised than the 77-year old Alain Resnais when, after 35 years of filmmaking and iconic standing with film buffs, he had his first real box office hit with this musical, which also won seven 1998 César awards including Best Film. The director of Last Year at Marienbad and Hiroshima Mon Amour started with a plot that showed the complicated interlocking lives of six everyday Parisians—Odile (Sabine Azéma) is looking for an apartment and her sister (Agnès Jaoui) is in love with a real estate agent—and had the characters lip-synch 36 popular French songs, or excerpts, that fitted into the story line (much like Woody Allen’s Everyone Says I Love You, which was nominated for the César Best Foreign Film award the same year). The delightful Azéma, Resnais’s long-time favorite actress and his wife since 1998, is in top form as she and her cohorts deliver hit songs by Edith Piaf, Johnny Hallyday, Gilbert Bécaud, Charles Aznavour, Leo Ferré, Serge Gainsbourg and even Josephine Baker.

When a youthful ménage à trois—Ismael, Julie and Alice sharing a bed and each other’s affections—ends in tragedy, Ismael finds consolation in an affair with Erwann, the teenaged brother of the man involved with Jeanne (Chiara Mastroianni), Julie’s sister. The plot moves forward partly thanks to 14 haunting songs sung by the actors themselves and composed by Alex Beaupain, who won a César for best music written for a film. Set in a romantic Paris of cafés, cigarette smoke and rain-soaked streets, this low-budget charmer has been called the Umbrellas of Cherbourg for the 21st century—an apt description, especially since Mastroianni is the daughter of Catherine Deneuve.

Originally published in the May 2008 issue of France Today