Home Culture Cinema & Film Adèle Haenel on her role in Céline Sciamma’s “Portrait of a Lady...

This is correspondent Lanie Goodman’s latest dispatch from the Cannes Film Festival 2019. Adèle Haenel chats about her role in Céline Sciamma’s incandescent love 18th-century story, Portrait of a Lady on Fire. For other news from Cannes, click here.

Call her the toast of the town. With three films in Cannes this year, thirty-year-old French César award-winning actress Adèle Haenel has continued to impress audiences by her sheer versatility, with parts ranging from a wacky cinephile barmaid in Deerskin by Quentin Dupieux at the Director’s Fortnight to role in a postwar Bosnian-set drama, Heroes Never Die by début director Aude Léa Rapin, featured in Critics Week.

After she set the Croisette ablaze as Héloise in Céline Sciamma’s Portrait of a Lady on Fire— an 18th-century captivating romance that is one of Cannes’ hottest titles, just acquired by Neon and Hulu for a North American theatrical release.

Add to that the buzz about Haenel as a possible contender for Cannes’ best actress prize. In the film, she plays the mysterious strong-willed Héloïse, a countess’s daughter who, upon the accidental death (perhaps suicide?) of her sister, has been summoned from a convent to wed a Milanese suitor. The countess (played by Valeria Golino), determined to marry off her second daughter, has assigned a young artist Marianna (Noémie Merlant) to paint Heloïse’s wedding portrait. However, this must happen in secret, and Marianna is passed off as a visitor and walking companion.

There is a lot of silent looks during the film; you become engulfed in complex dynamics of painter and model, the observer and the observed, all of which kindles the characters’ developing passion for each other as the days go by.

“The character Heloïse begins as mysterious. I was inspired by the idea of a Japanese mask. Eventually, you can sense a crack in the mask she is wearing,” says Haenel. The actress speaks quickly, straight-forward and emphatic, locking you into her clear gaze.

The film, which focuses on how women look at each other (“and through each other,” Haenel adds) introduces a new perspective on the stereotypes between artist and muse. “I think it’s important to explore that space—after all, women are 50% of the population,” Haenel says. “And when you think of the status of actresses, you can see that historically, we’ve been represented by the way men look at women.”

Haenel leans back on the sofa and smiles, then folds her arms in the exact same way as her character poses for the portrait. You can’t miss the brand-new tattoo on the back of the back of the actress hand in distinct black letters— “p.28”—an enigmatic reference to the film’s shattering emotional ending. 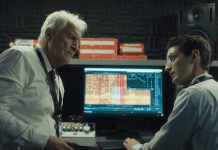