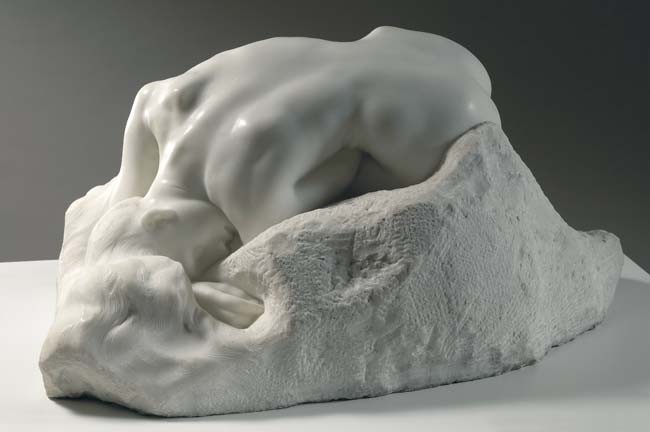 The main building and gardens of the Hôtel Biron are under renovation,  but the consolation prize is well worth a visit on its own merit. The temporary exhibition is housed in the chapel and concentrates on Rodin’s often overlooked marmoreal work. The talent of Auguste Rodin (1840-1917) wasn’t spotted early. He was severely near-sighted and failed three consecutive admission tests to the fine arts school. He allegedly made a bust of one of his teachers at the religious seminary he briefly joined, which the underwhelmed recipient promptly stashed out of sight in the attic. Rodin’s turbulent work didn’t match the neo-classical aesthetics of the time, but he refused to change and his style eventually caught on. He became the preeminent sculptor in France and a world-renowned artist during his lifetime. In this compact selection of his works in marble it is easy to understand why.

The entrance to the exhibition is by way of the narrow side aisle flanked by the first of the fifty or so sculptures waiting inside. The stained glass window casts the last fragments of color, as if to accustom the eye to experience the forms solely in shades of white. The first bust looks perfectly mundane, a portrait in three dimensions, resting on a plinth and fully formed. That’s where the shift away from the norm begins. As the visit progresses, the unfinished surfaces start to emerge and become as relevant  as the anatomy itself. From the ghost of cold rough stone appear the contorted features of The Crying Woman, pure human emotion jutting forward from the unyielding block.

Inside the chapel the white marble glows under the natural lighting overhead. The austere raw-wood blocks set off the monochrome pieces much more than if they had to compete against a busy ornate background. The journey progresses and the non finito rough hewn surface become more and more prominent as if threatening to overpower  the fragile flesh taking shape within. Models of the conceptual stages in plaster or terracotta punctuate the finished pieces giving off the impression of a phantasmagoric studio suspended in a parallel world. When we look at the Lover’s Hands, the bust of Victor Hugo, the Kiss and the Danaïd we wonder whether they are caught in the act of escaping,  or are being swallowed by the marble.

Once you feel ready to emerge back into a world of color, take some time to walk around the rose gardens, where you’ll find the iconic original cast of the Thinker frowning down at you. Then you can see it again in smaller scale in the cast of the elaborate Gates of Hell—for which  both The Thinker and The Kiss were  originally conceived—a  portal for a museum that was never built to which Rodin dedicated four decades of his life but never got to see in its finished form. In the inviting garden café you can have a light quiche and a salad, before heading out to your next destination. You will leave with something to look forward to: coming back for a visit of the refurbished Hôtel Biron and gardens to see the rest of the great master’s work.

Originally published in the June-July 2013 issue of France Today. 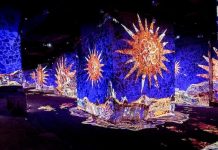 Light and Magic in France with Carrières de Lumières