This exhibition is one of the highlights of the art calendar at the Pompidou. A Swiss-German painter, Paul Klee was also a printmaker and draughtsman, originally associated with the German Expressionist group Der Blaue Reiter (The Blue Rider), and subsequently taught at the Bauhaus, the widely influential German art school of the period between the two World Wars. The exhibit at the Pompidou Centre features around 250 works loaned by the Zentrum Paul Klee in Bern.

Paul Klee’s most recognisable work is filled with simple stick figures, suspended fish, moon faces, eyes, arrows, and blocks of colour, which he orchestrated into fantastic and childlike, yet deeply meditative, works. His work was also influenced by the Cubism of Pablo Picasso and Georges Braque, and the abstract translucent colour of Robert Delaunay, and by his lifelong friendship with Wassily Kandinsky.

While Paul Klee was teaching in Germany, the National Socialists declared his art “degenerate” in 1933, causing him to return to his native Switzerland. The personal impact of the political landscape in Europe found its way into the sombre tones of his later work. This retrospective at the Pompidou provides an opportunity to take a fresh look at Klee’s work and the way he used irony through an approach originating in the early German Romanticism, consisting in a constant shift between satire and the absolute, finite and infinite, real and ideal.

The exhibition is divided into seven thematic sections highlighting each stage in Klee’s artistic development: “Satirical beginnings” (the early years); “Cubism”; “Mechanical Theatre” (in line with Dada and Surrealism); “Constructivism” (the Bauhaus years in Dessau); “Looking Back” (the 1930s); “Picasso” (Klee’s reaction after the Picasso retrospective in Zurich in 1932); and “The Crisis Years” (marked by Nazi policies, war and illness). 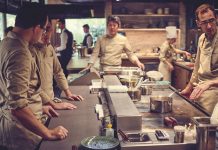