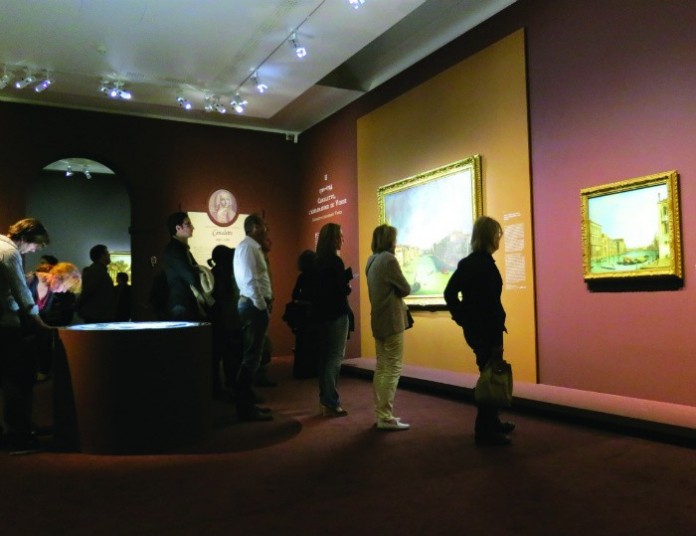 There could be a no more fitting opening exhibition for Aix’s stunning new Caumont Centre d’Art than the eminently aesthetic work of Giovanni Antonio Canal (1697–1768), who’s far better known as Canaletto and widely considered the 18th century’s foremost painter of Venice.

Following his initial training as a theatrical scene painter, Canaletto came into his own with the ‘veduta’, a hyper-detailed, usually oversized, topographical panorama of Venice, his hometown, which became a mandatory fashionable souvenir for anyone taking a fashionable European Grand Tour. His striking treatment of light was so popular with English patrons that when their visits to Venice were slowed by the War of the Austrian Succession, he upped sticks and relocated to London.

England’s nobility idealised Venice’s patrician society, and incorporated elements of it into their own vision of a monarchy controlled by aristocrats. Caneletto basked in this reflected glory, although the critics weren’t always kind to his art, claiming that it had lost some of its spirit when, upon his voluntary exile, he ceased to work ‘al fresco’ in Venice’s singular light.

This major exhibition presents a remarkable selection of more than 50 exquisite masterpieces, from large paintings to minute illustrations, with the support of the Royal Collection, Courtauld Gallery, London National Gallery, Met New-York, Uffizi Florence and Ca’Rezzonico in Venice.

This extraordinary show offers the perfect opportunity to explore gorgeous and dynamic Aix-en-Provence’s new art centre, based in a mansion built during Canaletto’s time, which has regained its full splendour following an accomplished renovation that succeeded in retaining the building’s original magic while adding modern comforts – you simply won’t be able to resist the charming gift shop.

At the planning stage, it was promised that Caumont Centre d’Art would deliver a rich cultural experience and it hit the bullseye as soon as its doors were opened.

Tip: For a ‘pinch me’ moment, extend your visit to enjoy dinner at the lovely Lounge Caumont, in the beautifully restored, 18th-century jardins à la Française.