We venture off the beaten track into Eastern France to the capital of French graphic design, the city of Chaumont, as art centre Le Signe is holding the second edition of the exciting Biennial of Graphic Design, running until September 22, with a dual spotlight on established artists and emerging talent.

Chaumont has close historical ties to graphic design. In 1905, local resident Gustave Dutailly, a professor of botany and politician, bequeathed to the city the impressive collection he amassed, composed of nearly 10,000 printed documents including an extraordinary collection of 5,000 posters illustrated by the likes of Toulouse-Lautrec, Grasset, Chéret, and Bonnard. Most of these pieces are extraordinarily fragile – as they were by definition meant for temporary use – and not built to last. The city picked up the mantle and not only took up a conservation role, but also continued to grow and expand the collection, turning into a hub for the promotion, learning, and exchange of a rapidly evolving discipline in its multiple incarnations. In a nutshell, anything that pertains to the art of combining text and images in advertisements, magazines, books, you name it, from hand-made typography, stencils, to icons, illustrations and emojis.

Le Signe – Centre National du Graphisme- widened the scope of what was a poster design festival (created in 1990) into a biennial cluster of events. Over 10,000 visitors are expected to explore the five exhibitions that form the Biennale, including the International Poster Competition with the participation of artists from 35 countries, displaying a pick of 110 posters out of 1142 works submitted, selected by an international jury. For the first time this year, the competition was open not just to works on paper but also to animated posters. Jean-Michel Géridan, director of the National Graphic Design Centre, said “the criteria for submission is that the posters be originally commissioned by a client, as opposed to the artists’ self-driven creation, and made in the past two years. This gives the creators a framework, a set of constraints to work within. There is a prize awarded by the jury, and a prize for emerging talent, plus a winner voted by the public.”

The cut-off age for emerging talent is set at 36, somewhat more flexible than in other disciplines, taking into consideration that a formally trained graduate leaves school in his mid-twenties, and the curators believe that the professional graphic designer needs on average at least ten years of practice under the belt to aptly his skill to international competition level. Out of the 317 candidates that answered the call, 168 were in this category.

The Biennale also invites established artists to display their creations, under the theme of “Post Medium”, a large group exhibition that explores the notion of art that combines text and pictures beyond the specific material or technology used to convey them. In addition, a series of workshops, lectures, and celebrations scheduled around the centrepiece exhibitions of the Biennale.

Good to know: Chaumont, in Eastern France, is easy to reach by motorway. Better yet, if you arrive by train Le Signe is just across the street from the station, with regular service to Paris that gets you there in a little over 2 hours. 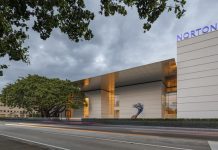