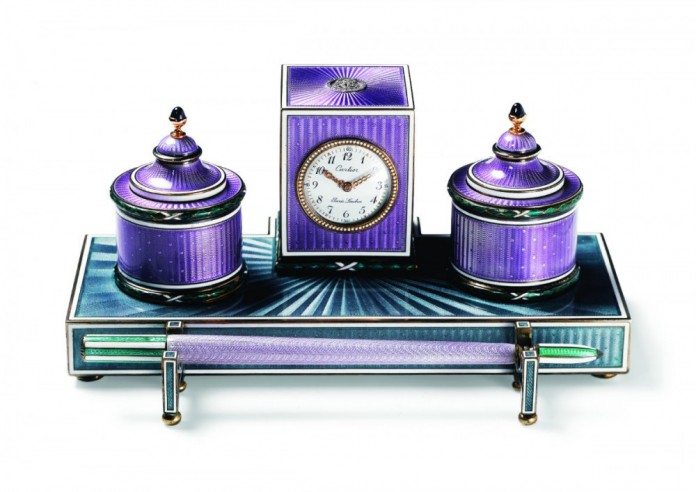 When King Edward the VII of England called Cartier “the jeweller of kings and the king of jewellers” back in 1902, he certainly could not have been accused of exaggerating. As jeweller to the royal courts of Russia, England, Belgium, Romania, Spain, Greece, Portugal, Serbia and Egypt, to name but a few, Cartier already enjoyed an unparalleled status among the global elite.

Fast-forward to 1956, and the world was watching the 26-year-old Grace Kelly set sail for Monaco, hot off the set of High Society, her final Hollywood film, in which she appears wearing an incomparable Cartier engagement ring, set with the purest emerald-cut white diamond – a 10.47-carat gift from her royal fiancé, Prince Rainier of Monaco.

Over the intervening years, Cartier’s wares had accompanied an extraordinary cast of notable characters, who flocked to the jeweller for its mastery in both anticipating and interpreting the tastes of the day. The superb exhibition, Cartier, the Style and History, which runs until February 16 at Paris’s Grand Palais des Champs-Élysées, illuminates the house’s evolution as jeweller to the aristocracy – in its traditional sense, involving title and prestige, to the modern variant, which is delineated by glamour, style and celebrity. The exhibition also relates a parallel tale, one concerning Cartier’s place at the vanguard of modernism, in both jewellery design and the decorative arts.

Tiaras and the Garland Style

Founded in 1847 by Louis-François Cartier, the house had friendly and lucrative ties with the Paris aristocracy through the later part of the 19th century. However, it wasn’t until Louis-François’ grandsons – Louis, Pierre and Jacques – took over the business that it began its ascent as an international arbiter of style.

The Cartier brothers made their first canny move in 1899 – to 13, Rue de la Paix, just off the elegant Place Vendôme, where stands Cartier’s flagship store to this day. The neighbourhood was already associated with Paris’s fashion vanguard, boasting the royal parfumeur, Guerlain, and trailblazing couturiers Worth and Jacques Doucet, with malletiers Louis Vuitton and Goyard just around the corner. Jacques Cartier’s move to London in 1902 and subsequently to New York in 1907 – leaving Pierre to oversee the British branch – would not only lay the groundwork for the marque’s important international presence, but also establish a radical new blueprint for luxury brands during the 20th and present century.

From the outset, the three brothers showed remarkable foresight in their collaborative leadership, but it was Paris-based Louis who initiated the revolutionary innovations in jewellery-making which would define the Cartier style. Although one can pinpoint a handful of designers who were deeply influential in the evolution of the Cartier house style, Louis oversaw every detail and insisted on a collaborative working model. This approach did not valorise any one individual, thus allowing for a free exchange of ideas, which fostered imagination and ingenuity, resulting in a remarkable fluidity of design.

Louis’s first great innovation was the introduction of platinum, a durable and supple metal which was then rarely used in jewellery-making. This allowed Cartier to do what it did best, namely highlight the world’s most spectacular gemstones in supremely light and graceful settings – an approach best expressed by the house’s early platinum tiaras.

One of the most pleasurable features of the Cartier, the Style and History exhibition, these early platinum tiaras trace a crucial evolution, from Louis’s cherished ‘Garland’ style – which hearkened back to Marie Antoinette and the court of Louis XVI – to an era when the fashion for extravagant ornamentation had given way to a more austere and rigorous design. As paradoxical as this might seem at a time when Art Nouveau, which Louis Cartier detested, was considered the avant-garde of jewellery design, the Garland style perfectly loaned itself to the more streamlined, rectilinear designs that paved the way for the house’s next major innovation: Art Deco style.

The three brothers were avid travellers and evidence of their far-flung influences – Russian, Egyptian, Persian, Indian, Chinese and Japanese – also found their way into the Cartier style. Indeed, Cartier’s precise lines loaned itself quite naturally to Oriental forms and its workshops then began producing elegant geometric shapes and stylized figures, offset by a revolutionary colour palette which juxtaposed deep greens and blues, adding touches of lilac or red.

Louis’s wide circle of friends included celebrated figures in the worlds of dance, art and fashion, all of whom were champions of modernism and doubtless influenced the intrepid jeweller. His circle included poets Jean Cocteau (the tears which the heroine of his 1946 film, La Belle et La Bête, cries are Cartier diamonds) and Paul Valéry; Sergei Diaghilev, whose Ballet Russes was a distinct influence on Cartier style; visionary fashion designers Jeanne Lanvin, Jacques Doucet and Coco Chanel; the revolutionary decorator Elsie de Wolfe and a string of headstrong American heiresses. The latter, which included the likes of Anne Morgan, Marjorie Merriweather Post, Daisy Fellowes and Barbara Hutton, encouraged Louis and financed many of Cartier’s most extravagant designs.

These were symbiotic relationships: Cartier provided peerless jewels and uncompromising excellence, then the personalities who flocked to his stores were captured wearing the house’s wares in paintings and photographs (many of which are included in the Grand Palais show). This lent Cartier a flair and mystique which both inspired future designs and brought the jewellery irrevocably to life.

Between the World Wars, fashion reflected women’s new-found freedom and independence, and so did the jewellery. Tiaras morphed into the headbands of the ‘roaring 20s’, and the exquisite enamelled-and-jewelled vanity and cigarette cases – still taboo in aristocratic circles – were all the rage for fashionable women of la société café.

Jeanne Toussaint, nicknamed la Panthère, was the creative driving force at Cartier from the mid-1920s into the 1970s. The embodiment of the emancipated woman, along with her good friend Coco Chanel, she gleefully dispensed with the conventions which dictated how jewellery should look and be worn, bringing to Cartier a freedom of expression which utterly revolutionised the world’s approach to the art of adornment.

If there were ever a Cartier muse, then it was la Panthère. A satellite character in Paris’s fashionable artistic set, and Louis Cartier’s lover, her nickname reflected a fierce individualism and iconoclastic style– Toussaint favoured turbans paired with Chinese pyjamas and Russian boots. Around 1920, Louis hired her to direct Cartier’s small leather goods department and quickly recognized her immense creative potential.

For her first 13 years with Cartier, Toussaint worked closely with Louis in every creative aspect of the house, their twin temperaments and uncompromising demand for excellence creating an enduring bond of trust.

Toussaint was made artistic director of high jewellery in 1933, and although she couldn’t draw her influence upon the house style was incalculable. Under her leadership, which lasted 50 years, Cartier’s house style departed from Art Deco’s structured lines to incorporate more whimsical and naturalistic themes, including flowers, animals, dragons and birds. Toussaint’s fanciful creations for the Duchess of Windsor perfectly illustrate the immense ingenuity, charm and modernism which Toussaint brought to the house. Under her influence, Cartier freed jewellery from being formal and purely decorative, making it more casual and versatile.

The Duchess of Windsor’s stylised flamingo brooch of 1940, fashioned using her old jewellery, is a typical Toussaint flight of fancy (and a highlight of the Paris exhibition). As you would expect, Toussaint’s first brooch depicting a three-dimensional panther – perched atop a Kashmir sapphire cabochon of 152.35 carats – was snapped up by the Duchess at first sight during 1949. A reference to Toussaint herself, the panther became the house symbol, and was reinterpreted for brooches, necklaces, bracelets, earrings, rings and Cartier’s sublime vanity cases.

Ever the rebel, Toussaint’s famous caged bird brooch, a symbol of occupied France which she displayed prominently in Cartier’s windows, saw her detained for three days at Nazi headquarters. When Paris was liberated, the bird reappeared in every window, freed from its cage and singing.

For sheer opulence, one of the most remarkable pieces in the Grand Palais show is the ceremonial necklace created in 1928  for the Maharaja of Patiala, who arrived from India carrying bagfuls of the gemstones, which he poured out in glittering cascades at Cartier. Many Indians of royal lineage favoured Cartier as the best choice for modernising their jewels, but the Maharaja of Patiala outdid them all.

Set with 2,930 diamonds totalling nearly 1,000 carats, including the colossal 428-carat ‘De Beers’ yellow diamond, the necklace’s multiple strands – all included in the current exhibition – were lost for decades. They showed up at a London dealer’s in 1998, devoid of their most precious stones and it took Cartier nearly two years and a revival of the old techniques to restore the strands to their former glory, the errant stones replaced by a zircon and white topazes.

In 1919, Maurice Coüet, a 28-year-old horloger proposed a collaboration with Cartier which was to culminate in some of the house’s most extraordinary creations: the ‘mystery clocks’. They were so-called because no mechanism could be seen and their platinum-and-diamond-encrusted hands, suspended in rock crystal, quartz or other precious stone, seemed to float in space. Each mystery clock took between six-to-nine months to make, and the techniques used are still scrupulously guarded. An unprecedented 19 of them are featured in the Grand Palais exhibition.

That same year, Louis displayed his first ‘tank’ wristwatch in the windows of 13, Rue de la Paix. Within a decade this sleek, modern timepiece would become a design icon and the world’s most sought after wristwatch. But it was not Louis’s first – in 1904, a wealthy aviator named Alberto Santos-Dumont approached his good friend Louis for a timepiece which could be easily accessed and read while flying. Louis responded with characteristic ingenuity and the ‘Santos-Dumont’ wristwatch’s visionary design and functionality proved quintessentially modern. In fact, it preceded the disappearance of the pocket watch by 40 years.

The procession of glamorous, Cartier-wearing movie stars reads like a Who’s Who of Hollywood royalty. Rudolf Valentino refused to remove his Cartier tank watch during the filming of The Son of the Sheik (1926), while Gloria Swanson wore her superb rock-crystal-and-diamond bracelets, a Jeanne Toussaint design, in glamour shots and as the aging star in Sunset Boulevard (1950). Tallulah Bankhead fished with a diamond Cartier bracelet in Hitchcock’s Lifeboat (1944), and Marilyn Monroe received one in Some Like it Hot (1959). On the other side of the silver screen, newsreel cameras captured Elizabeth Taylor poolside at Cap-Ferrat in 1957, as she opened a tell-tale red Cartier box holding a hefty ruby-and-diamond set from her third husband, Mike Todd. The list does seem endless…

This mystique has never been so well documented or contextualised as it is with the monumental exhibition, Cartier, the Style and History, which was made possible by a little-known collection, stored in an unmarked building on a nondescript street in Geneva. The Cartier Collection contains over 2,000 of the jeweller’s most important works, which the house has quietly obtained – at auction and through private sales – since 1973, for the study and preservation of its considerable legacy.

Originally published in the December-January 2014 issue of France Today